It seems fitting on this cloudy and cold 4thof July in Kenya to reflect on what God has done in the past three years since we made the challenging transition from Tenwek to Kijabe Hospital. So, I’ve built a blazing fire, and I’m sipping a cup of hot chai as I write, all the while wishing we could be in the U.S. for a blazing hot Independence day cookout with burgers, beans and sweet corn followed by fireworks as the sun sets.

Change is inevitable, and endings and new beginnings are a common part of this walk with Christ as strangers in this world.  We often don’t take the time to grieve the multiple “deaths” that we experience regularly, and as a result, can get stuck in confusion, disillusionment, and stunted growth.  But if we take the time to be honest with ourselves, and God, we can begin to see the new life that springs forth from the ashes (“Unless a grain of wheat falls to the ground and dies, it remains alone; but if it dies, it bears much fruit. John 12:24).

If we would have been told 4 years ago that we would leave Tenwek (endings) and start again at Kijabe (new beginnings), we would have thought that would be impossible.  We had worked too hard, invested too much, and planned to spend years, if not decades there.  And I admit, we did not grieve well the loses we experienced and spent many months in a fog after first moving to Kijabe.

But God, in His mercy, began to reveal the bigger picture of his sovereign plan, and one by one, new beginnings unfolded. In December 2016, Emma graduated from Mercy Multiplied in Nashville and returned to Kenya to complete her junior and senior year at RVA. In February 2017, we discovered we were expecting another child, and Ethan Benjamin was born at Kijabe Hospital on October 11, 2017.  Now he is a little toddler, running around the house and trying to compete with his two, very doting older sisters. 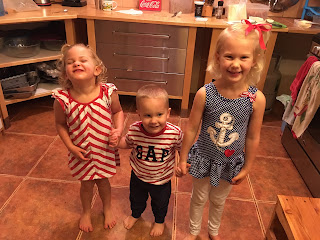 In March 2017, our oldest, Jeremiah, eloped, and although this was a complete surprise to us, we see God’s hand in this new beginning for him and Tory!

In July 2018, I became the first orthopaedic surgeon to complete the American Board of Orthopaedic Surgery certification process overseas in a mission/humanitarian setting.  In January 2019, PAACS Orthopaedics added two new programs (Kijabe and Soddo/CURE) to join Tenwek (which graduated their first two residents) bringing to total number of ortho residents to more than 20 (of which I have the privilege of overseeing as the PAACS Orthopaedics Regional Director).


And as of this month, we will have graduated two of our daughters from high school to send off to college (yes more endings/new beginnings).

The orthopaedic work at Kijabe Hospital thrived over the past three years, and I grew tremendously as I was pushed to more challenging cases such as revision total hip arthroplasty and bone transport for huge bony defects.


And as the Head of Orthopaedics, I was challenged to lead in deeper ways, including a book study for the consultants entitled “Emotionally Healthy Leadership” By Pete Scazzero (in which the last chapter is entitled “Endings and new beginnings.”  Yes, you could say this book has had a profound impact on me!)


Heather and I also experienced a rebirth of regular prayer and a new conviction for sabbath rest.  We, for the first time in our missions career, began to experience the joy of intentionally leading together, in ministry, from our marriage (yep, another chapter in EHL).  Heather was involved with multiple prayer ministry groups around the Kijabe campus, and we met weekly with a group of peers (couples with young kids, most of whom were 10+ years younger than Heather and I!).

And we were able to really connect with our older kids during this critical time of development in their high school years.  Many painful endings led us to beautiful new beginnings.

And now, in two weeks, we will experience yet another ending as we leave this season at Kijabe, and head back to the States to begin a year of Home Ministry Assignment (HMA).  During this time, I will be doing a year-long fellowship at Mayo Arizona in shoulder, hip and knee arthroplasty.  At this point, we are planning to return to Kenya after the fellowship ends in July 2020, but we have learned to hold plans very loosely and are continuing to ask God for discernment of his will (Do not be conformed to this world, but be transformed by the renewal of your mind, that by testing you may discern what is the will of God, what is good and acceptable and perfect. Rom. 12:2).

We continue to be thankful for each one of you, who have supported us prayerfully and financially over the past 10+ years we have spent in Kenya.  Without your faithful work in our lives, we would not be here!
Posted by The Galat Family Kenya Update at 5:13 AM

are everyone looking for ways online to get help solving their pregnancy and infertility problems when most of every native American is talking online about the help of Dr Mandaker Alamun. I checked him out when my husband who could not get me pregnant for over 9 years of marriage as a result of low sperm count became fertile and now, I am 5 months pregnant and it is this man known as Dr Mandaker who helped my husband solve his problem. My name is Alecia from CA USA. I would advise anyone and everyone who needs the help of any spell caster in love marriage,finance, job promotion,lottery spell,poker spell,golf spell,Law & Court case Spells,money spell,weigh loss spell,diabetic spell,hypertensive spell,high cholesterol spell,Trouble in marriage,Barrenness(need spiritual marriage separation),good Luck, Money Spells,it's all he does or looking for breakthrough in your political career to meet this Dr Mandaker the link to his website copy this link (witch-doctor.page4.me)His email contact witchhealing@outlook.com for He is a Reliable and trustworthy. I and my husband have gone to different hospitals having the thinking that I was at fault for not getting pregnant. But at the Federal hospital, they examined him too and his sperm count was low and unable to get a woman pregnant as a result of male infertility. It was then I sort out,thanks to Dr Mandaker.

Best documentation centre has years of experience producing fake passports,Driving Licenses and other identity documents. We use high quality equipment and materials to produce counterfeit passports. All secret features of real passports are carefully duplicated for our falsified documents. We are the best producer of quality fake documents. With over 30million of out documents circulating over the world. We offer only original high-quality fake money ,passports, driver's licenses, ID cards, stamps and other products for a number of countries like: USA, Australia, Belgium, Brazil, Canada, Italia, Finland, France, Germany, Israel, Mexico, Netherlands, South Africa, Spain, United Kingdom. Dubai(the emirates) and many more.

PLEASE READ PLEASE READ PLEASE READ
Hello everyone, i would like to share my experience on this platform. i have been hearing of Blank Atm for a while and i applied through a few people but i was scammed, not until i found Mr George who saved me from scammers, i got my blank ATM card in 5 days after application and tried the encrypted card in an ATM machine and pos cash store to my greatest surprise i was able to withdraw $3000 and that was the daily rate i applied for. to be honest there is no risk involved the card is not traceable and has an infrared signal that blocks off CCTV during your withdrawals. i just payed my daughters tuition fee and cleared my mortgage debts, i am also richer and started a business that is doing fine. Mr George is really a life saver and he is very genuine. You can contact him with this email address: blankatm402@outlook.com
Best wishes

The internet today is full of SCAM ADS, mostly in comments of various sites and blogs. A large number of individuals have been victims of scam and lost a lot of money to SCAMMERS. Most of the common scam you can see
❌BANK LOAN SCAM. ❌BINARY OPTIONS SCAM.
❌BINARY AUCTION SCAM. ❌HACKING SCAM. and lost more......

But here is a good news to everyone who has been a victim of INTERNET SCAM❗️
You can get your money back from your scammer, Authorities will not been involve just the genius of our skill.

HOW DO WE OPERATE⁉️
We first of all study the scammer brought to us by hacking the person device(phone or computer) to get information of How, Where, this person keeps money he/she as defrauded from people ( so many of this scammers don’t actually save the money in banks, they mostly stack the money in a Bitcoin wallet, that way it is safe and untraceable to authorities) and we work on a strategy to get back the money and give it back to whom they have defrauded.

Contacting us is simple, just give us a message through the email below.
Email-: globalpluggers@gmail.com

If you a victim of internet scam or you know someone who is, make contact to us immediately. You are 💯 % safe to contact us, our email is very secure.

Are you looking for a loan company capable of meeting your financial needs during this Covid 19 times? We offer user friendly services that meet your business and private needs. With just an interest rate of 2% we give you access to different categories of loans, from business loans($50,000 - $100,000) to tuition loans to car loans to mortgage loans($2,000 - $20,000) even up to vacation loans. we provide loans when the bank fail to do so because we care about you Contact us now and get your loan decision within five minutes and loan approval and disbursal of funds within 24 hours. be safe wash your hands regularly and practice social distance in public Email us at smallscaleloans@gmail.com or on whatsapp +447451229283

Hello all
am looking few years that some guys comes into the market
they called themselves hacker, carder or spammer they rip the
peoples with different ways and it’s a badly impact to real hacker
now situation is that peoples doesn’t believe that real hackers and carder scammer exists.
Anyone want to make deal with me any type am available but first
I‘ll show the proof that am real then make a deal like

..Wire Bank Transfer all over the world

..Western Union Transfer all over the world

I am here to give testimony on how this powerful spell caster called Dr. padman helped me to fix my relationship. I was heartbroken when my Lover told me he is no longer interested in marrying me because another lady has used a black magic on him. I cried and sobbed every day, until it got so bad that I reached out to the Internet for help, that was when i read a review about the great work of Dr. padman then contacted him for help to get my love and my life back, he helped me cast a powerful love spell and to my greatest surprise after 24 hours of doing the love spell my lover came back on his knees begging me to forgive him We are now happily married and all thanks goes to Dr. Padman Wonders for helping me save my relationship you can contact Dr padman via Email padmanlovespell@yahoo.com or info@padmanspell.com Website: https://padmanspell.com/index-3.html or WhatsApp +19492293867

Thank you for sharing such uplifting story. I had two miscarriages a year apart. I was told it was nothing to worry about despite having multiple fibroids. The doctors were not concerned about the position of the fibroids. Miraculously, I became pregnant within a month after i order spell and herbs from Priestess Hallifat .i recommend you try her out : lifecentre@live . com