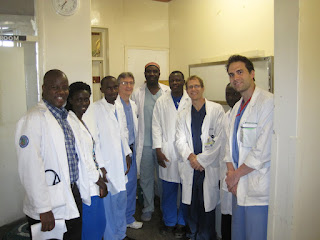 Our current orthopedic team (actually minus a few people!). 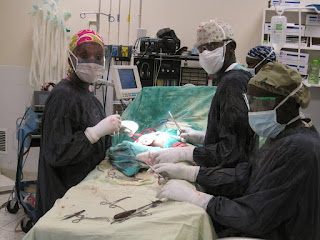 Dr. Dama and Meshack, hard at work closing a wound at the end of a case. 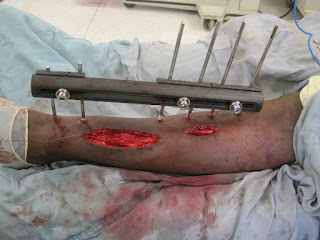 "Bone transport" - something new at Tenwek. This patient had an open tibia fracture with a large bone defect of approximately 4cm. After "squaring off" the ends of the bone at the defect, a fresh cut was made in the bone further up toward the knee. Using this external fixator, the "free" bone segment will slowly be moved into the defect and new bone will fill in behind it, thus "transporting" the bone and closing the defect. 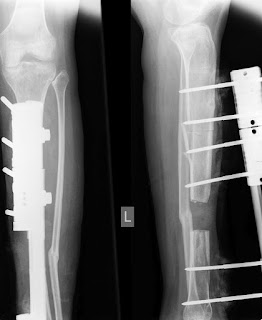 The defect will be filled with the transported segment of bone (at the rate of 1mm per day). Notice the cut in the bone proximally. As the bone is transported, new bone will fill in behind. Please pray for complete healing for this patient. 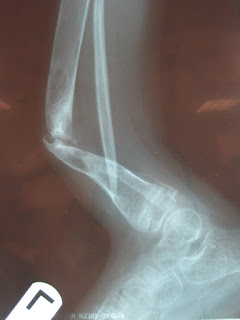 Neglected tibia fracture in a 5 year old boy who was seen initially at a large hospital in Nairobi. Unbelieveably, the boy was never even placed in a cast and developed this non-union. On Friday, we placed a small rod down the middle of the bone to stabilize it.


Early yesterday morning, while doing x-ray rounds with our orthopedic surgery team (incidentally the largest team we have ever had, a far cry from the “early days” when I first arrived in Kenya 2008 when it was only me and one female intern who had zero interest in orthopedics), the residents flashed the x-rays of a young Masai girl on the computer screen, which showed a huge mass about the knee. Given her age and x-ray findings of bony destruction and soft tissue swelling, the mass had all the characteristic looks of osteosarcoma, or bone cancer. Without even seeing the patient, it was clear to us all that the only treatment option for her, at this point, would be a high amputation near the hip.

Later that morning on patient rounds, our team met this little girl, and her condition was far worse than we anticipated. She was surrounded by a foul smell, her massive knee wrapped in a gauze dressing, as if in shameful attempt to hide what was underneath. Her hemoglobin was 3.0 (the lowest I have seen in a living patient), far off from the normal value of 15.0, and corroborated by the listless appearance of her dark-skinned, yet noticeably pale face. Blood needed to be given prior to any surgical intervention, otherwise she could easily die during the procedure.

After receiving blood overnight, the patient underwent surgery, which was performed by Dr. Adero, our visiting orthopedic resident from Moi University. After the leg was removed, we unwrapped the knee dressing in order to get tissue to send for pathologic confirmation of cancer. As we proceeded, we were all horrified by what we saw: the entire end of the femur bone was exposed (having slowly eroded through the skin as the tumor grew), with foul pus pouring from the knee. I needed to leave the room because I was nauseous, both from the smell, and from anger towards whoever allowed this poor girl to suffer so long, in such an inhumane way, before seeking any medical attention (aside from the multiple linear scars about the skin of the knee from the “medicine man” in a vain attempt to cure the problem).

As I reflect on this girl’s plight, and ask myself how any person could be so terribly neglected, I am reminded that while “man” (including parents, children, brother, sisters, best friends) may let us down, Jesus never will, even in the most challenging of circumstances. In fact, his care is so perfect that He can use anything we experience somehow for our good. My prayer for this girl is that in the midst of her suffering, abandonment and neglect, she might feel the deep love of her true Father, who will never leave her or forsake her, who will always be there, and, as a result, that she would trust Him with her life, however long she has left to live. May we all see this truth in our lives…God is with us…He sees what we are going through…He will never neglect.

Deut. 31:6 Be strong and courageous. Do not be afraid or terrified because of them, for the LORD your God goes with you; he will never leave you nor forsake you.”
Posted by The Galat Family Kenya Update at 5:30 AM 3 comments: 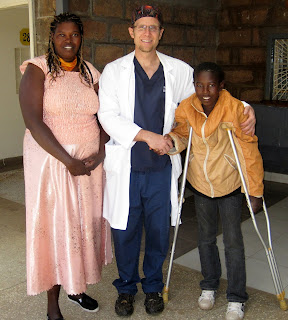 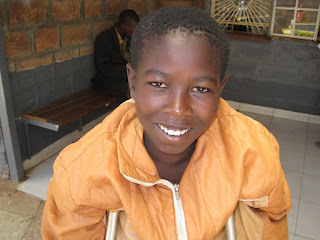 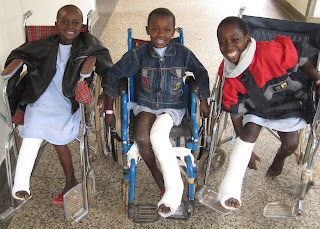 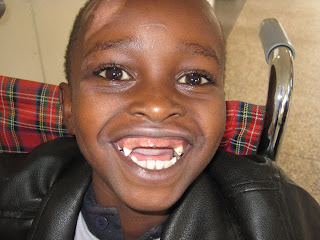 Posted by The Galat Family Kenya Update at 2:34 PM 3 comments: