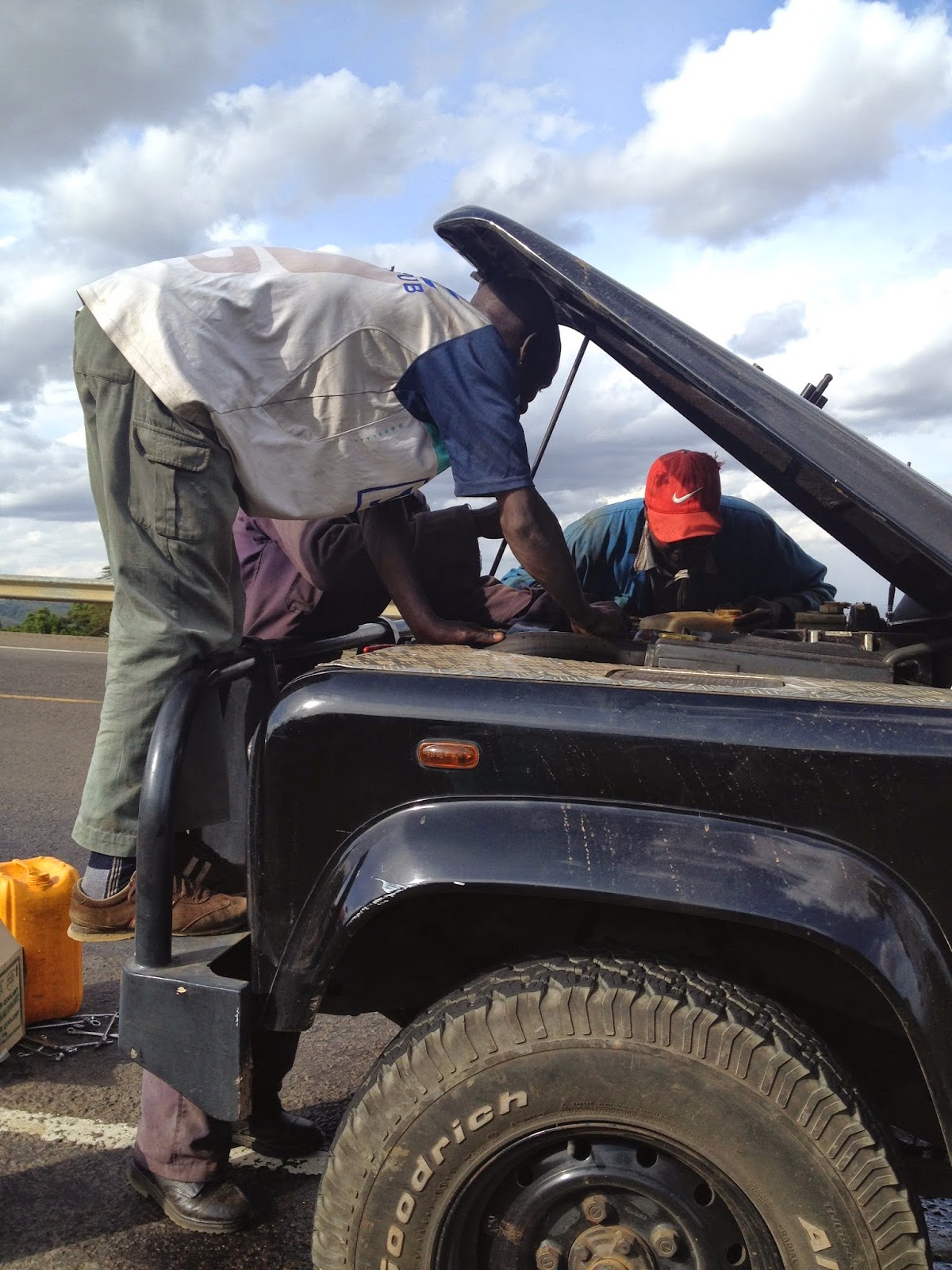 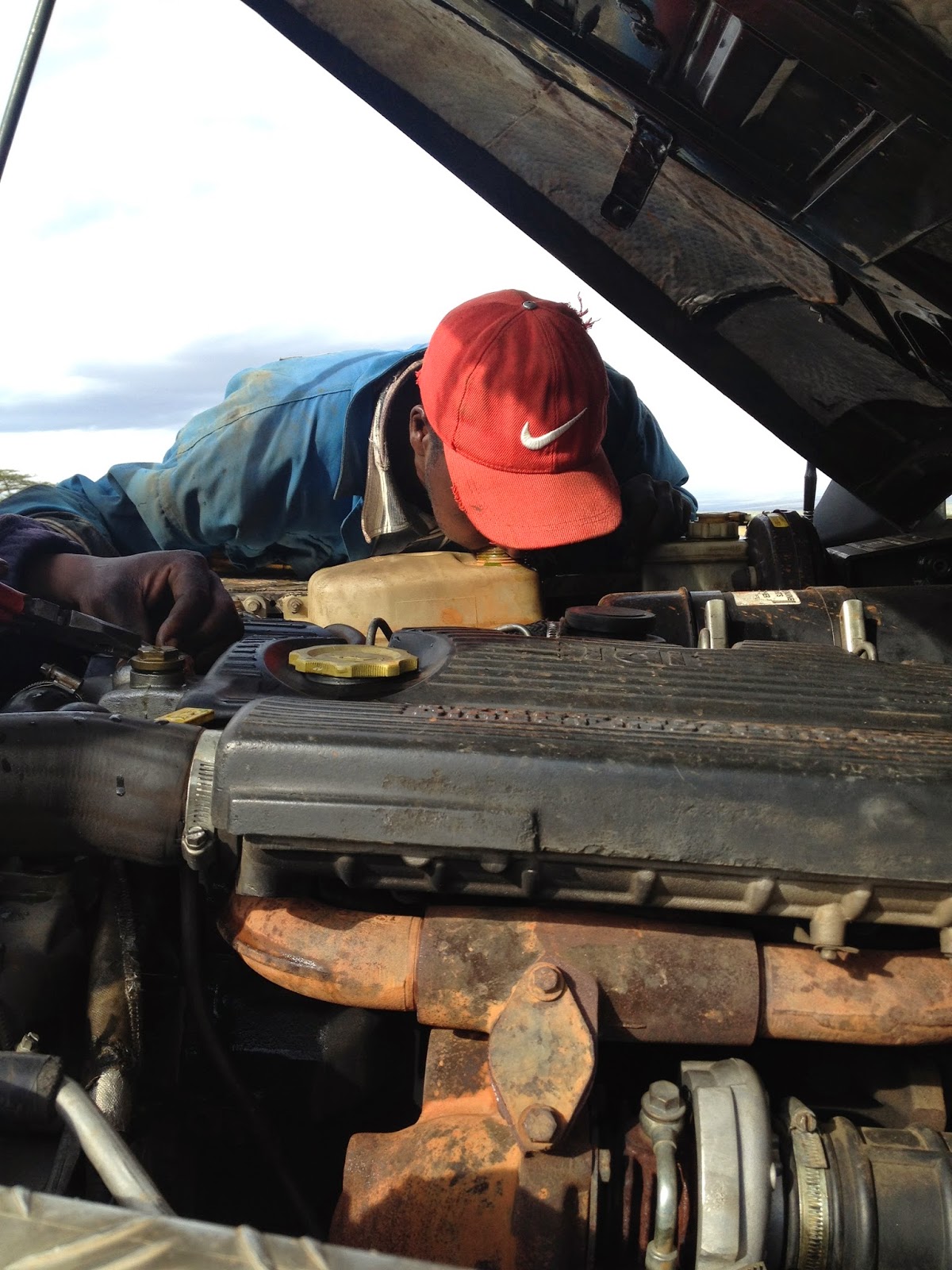 Blowing into the cooling system? 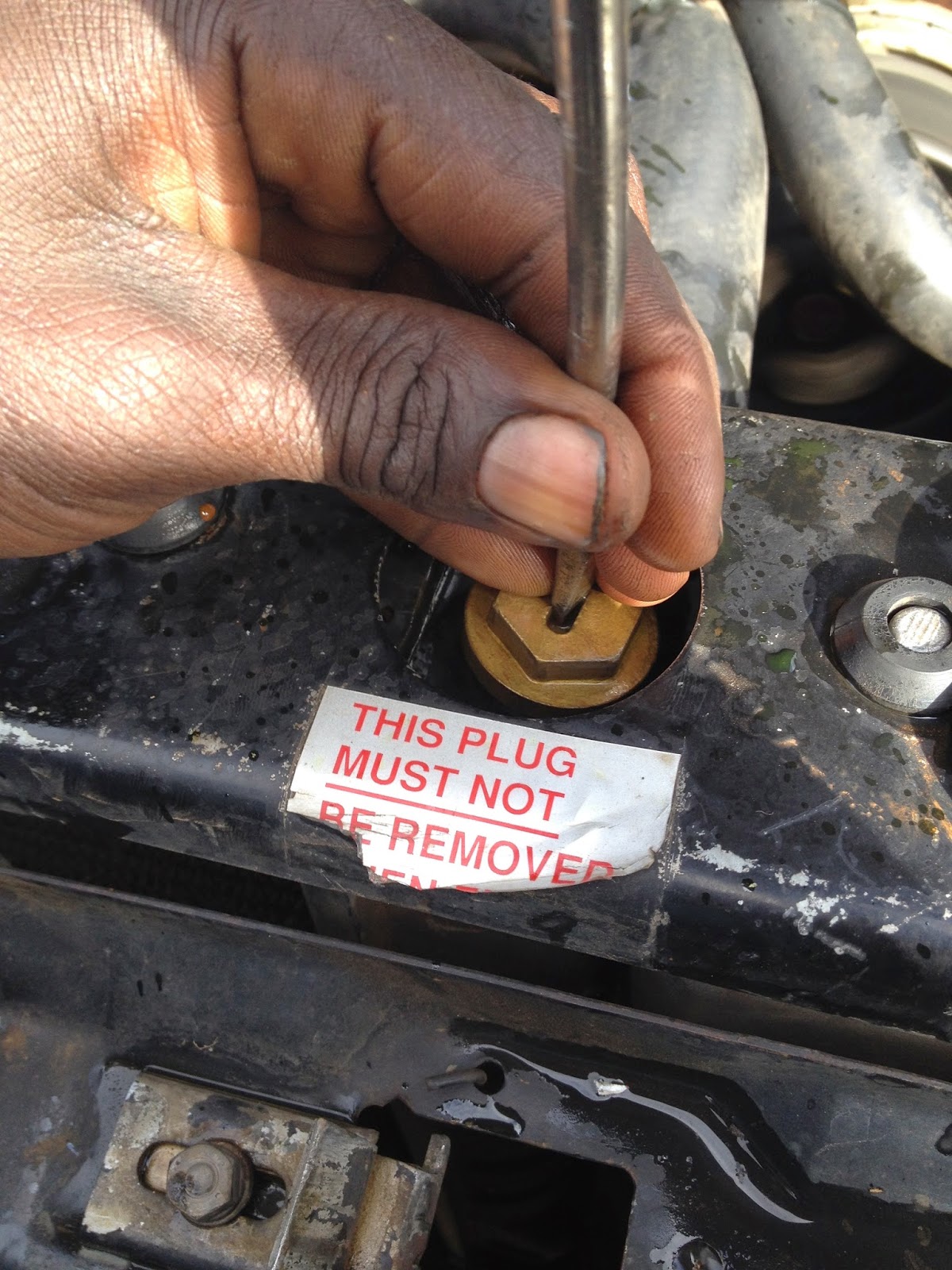 Not much to say here. 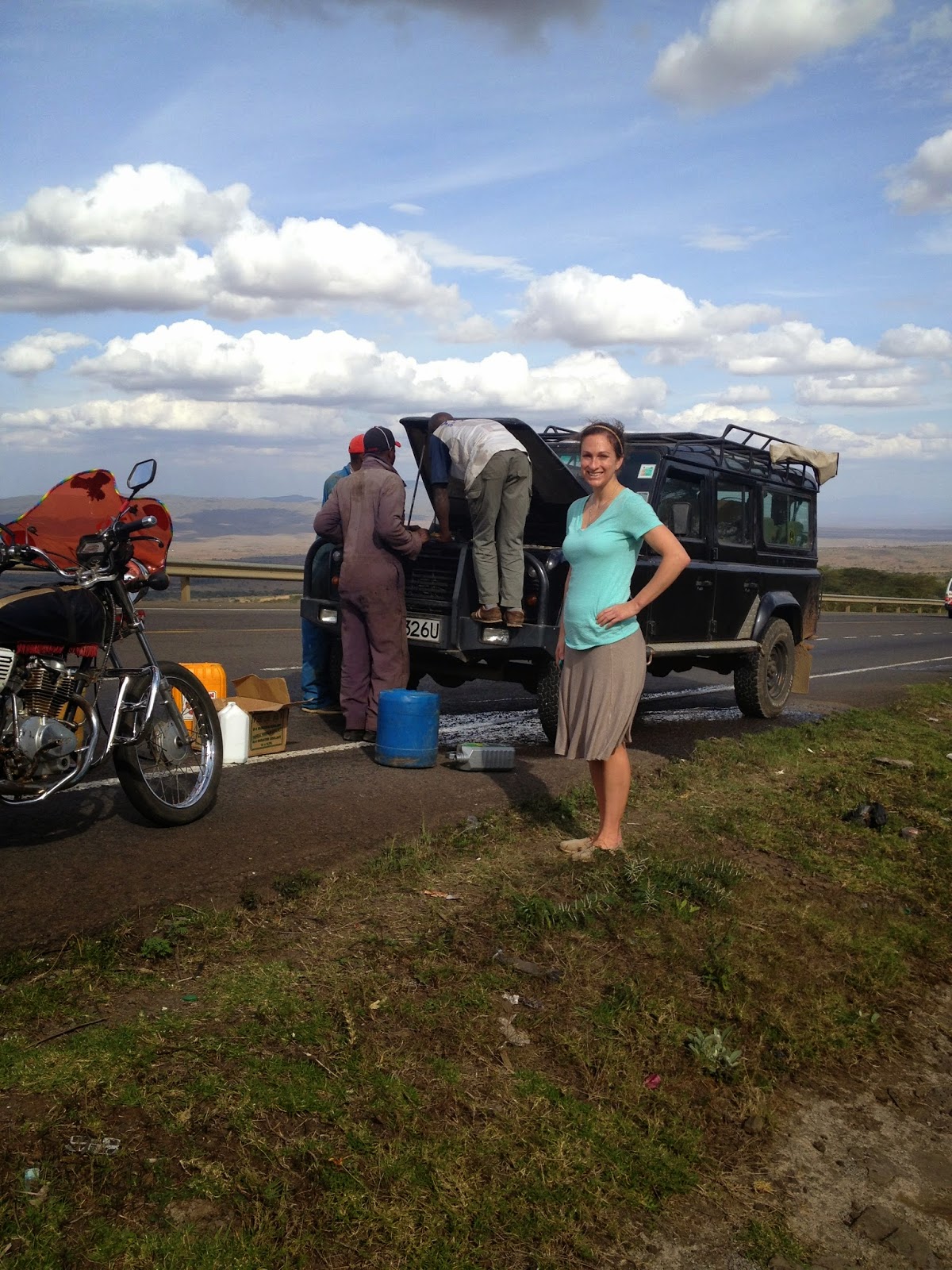 Lauren was a good sport, and didn't appear nervous once. 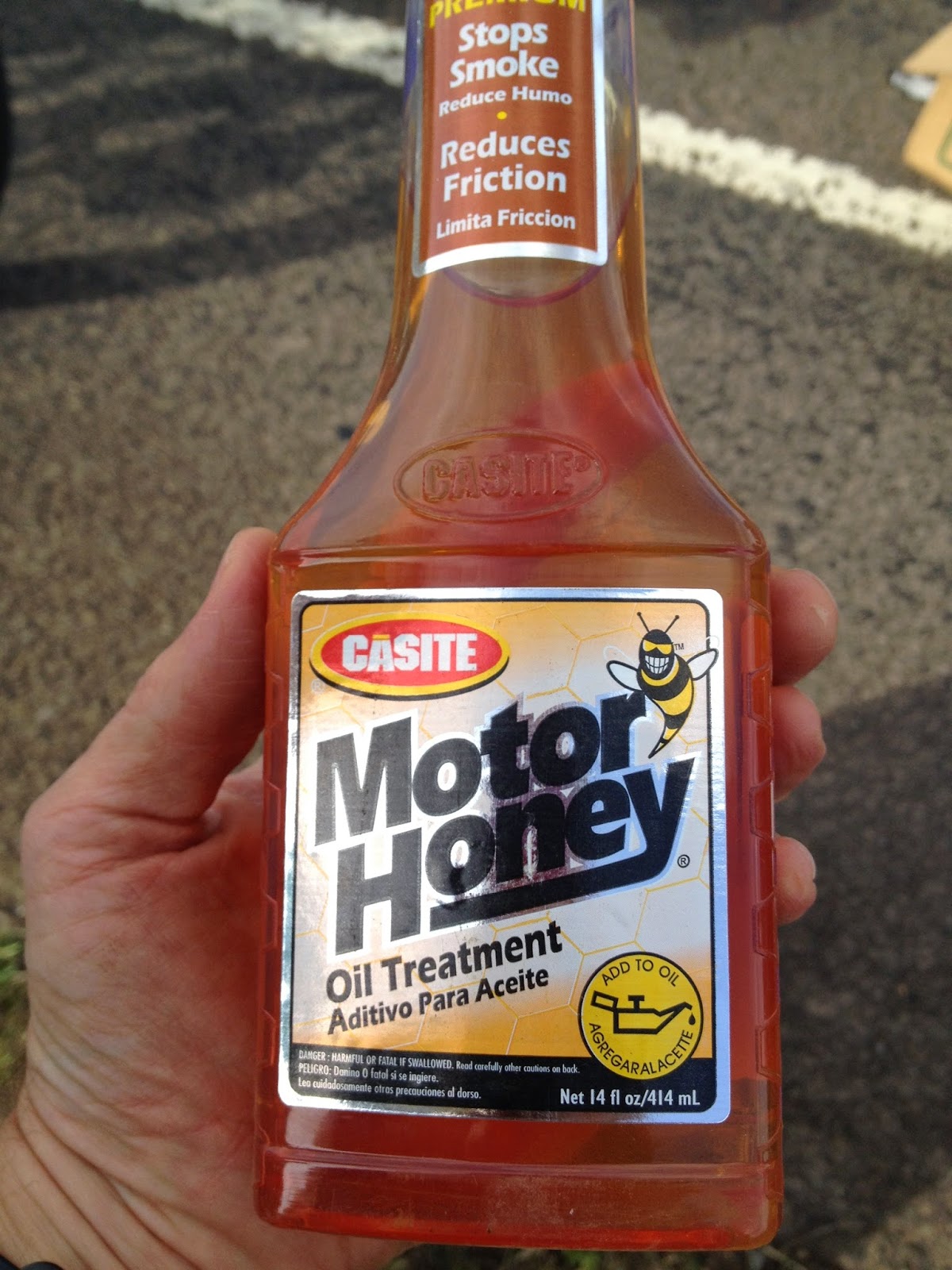 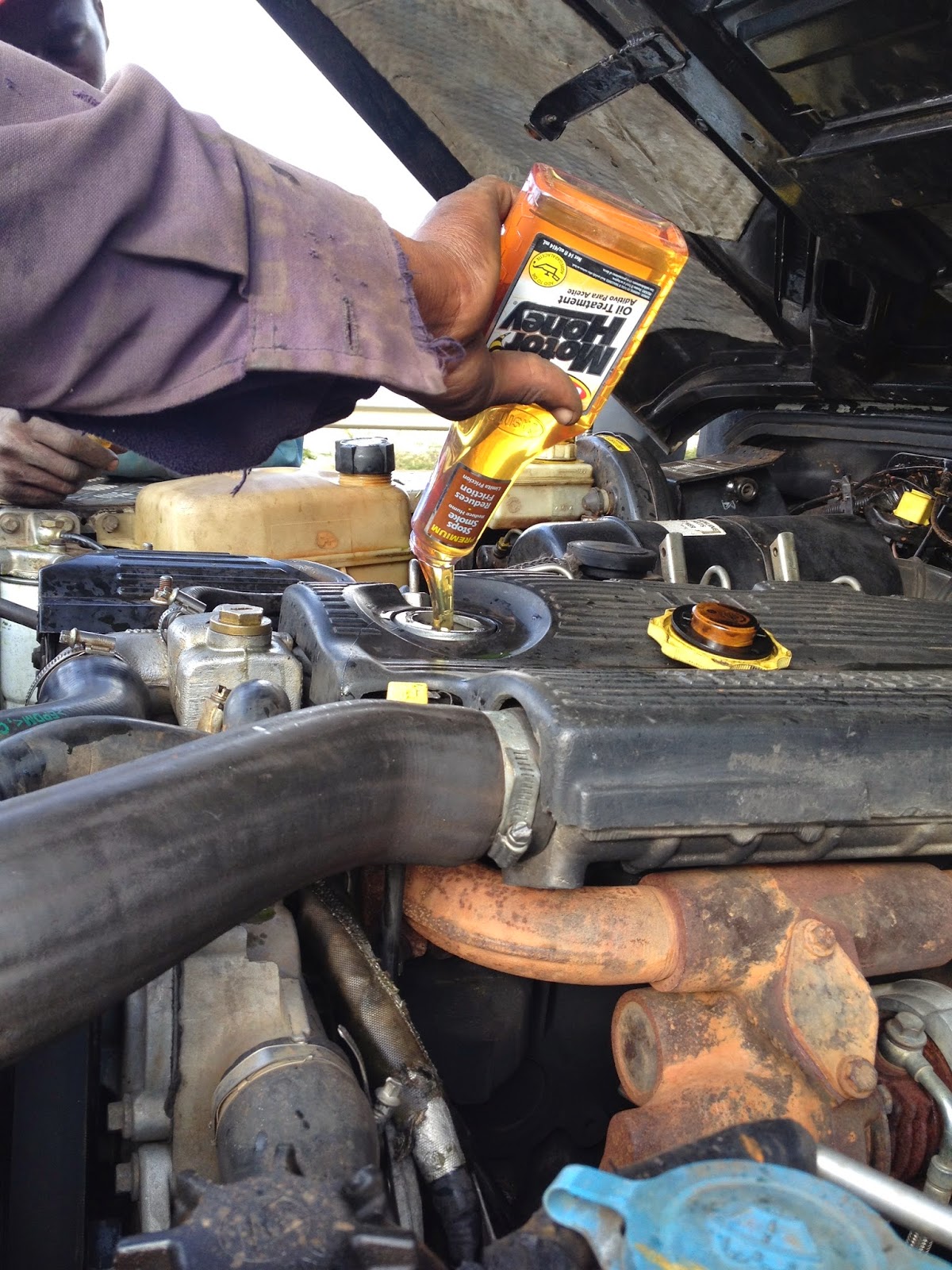 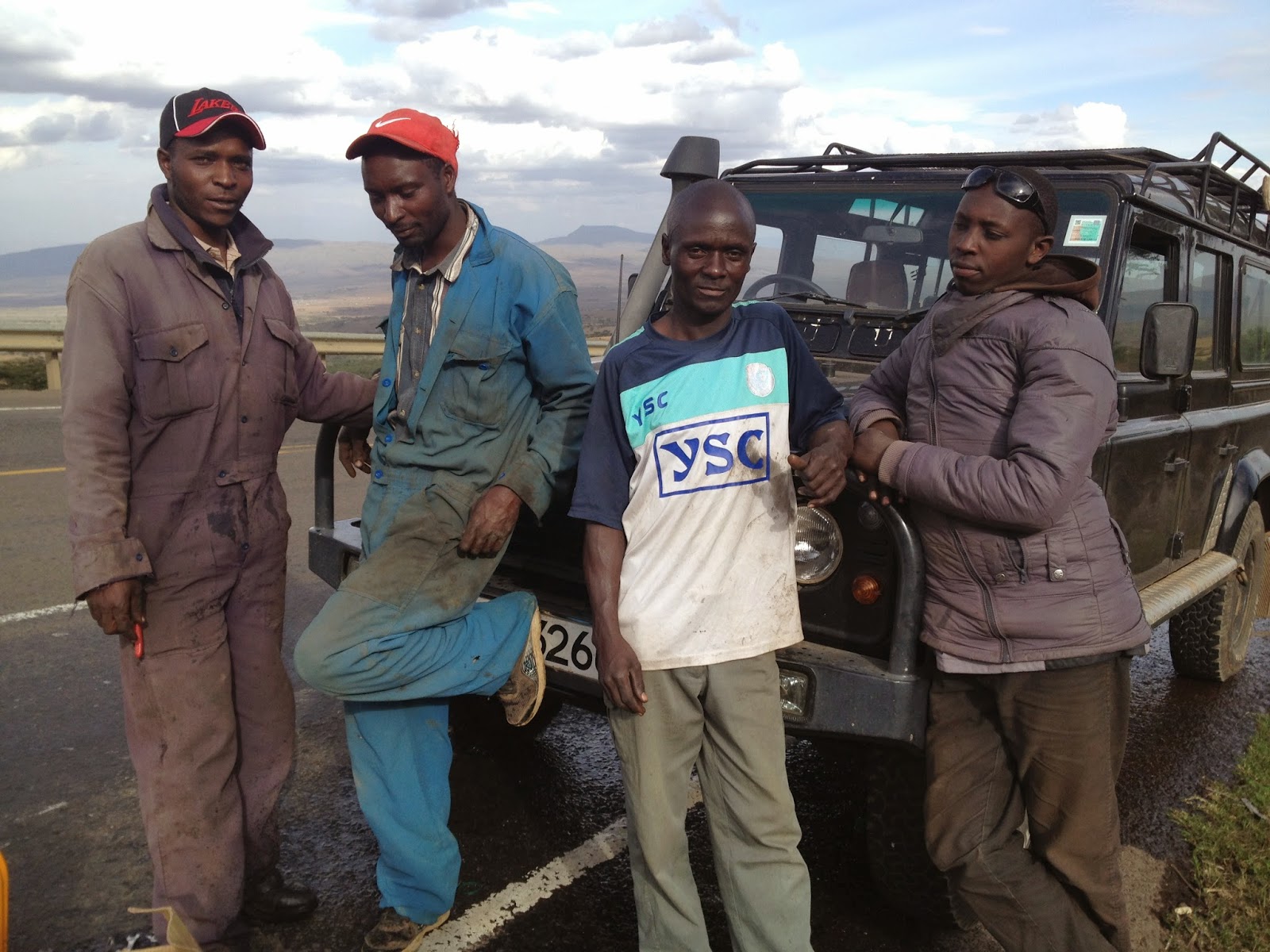 They pretty much hit the jackpot that day.

Among the few events that cause the most stress in this life of cross-cultural missions, is the unexpected Kenyan road-side break down.  Don’t get me wrong… I love our 2003 Landrover Defender.  When it is working well, it can go anywhere, as a barebones, no-frills man-truck (as Vera Steury calls it) in which you can forget about listening to music or holding a decent conversation (secondary to the loud hum of its tractor-like, turbo-diesel engine).  This truck has brought us safety through many kilometers, including two riots and even random gunfire.   However, there is a reason the Defender was considered the ultimate “villain/lemon” in the animated movie, Cars 2.

I had just rendezvoused with Dr. Lauren Leffler, a 5th year orthopaedic resident who arrived in Kenya the night before to serve at Tenwek for 4 weeks.   I was going to save her a few shillings by giving her a ride from the Rift Valley Academy to Tenwek.  Just the day before, I had gotten the brakes repaired (the pump had failed, causing of complete loss of power to the brakes).  So I assumed the Defender was fully tuned and ready for the journey.  All was well as we descended into the Great Rift Valley, and cruised across the valley floor, dodging overloaded lorries and miscellaneous wandering goats and cattle.

On the far side of the valley, as we climbed the long, winding western escarpment, I noticed a pungent smell, and, to my dismay, realized this smell was coming from me (that is, my Defender).  I then glanced at my marginally working temperature gage and found it was registering in the red zone way above “H.”  Before I had time to fully process, the engine literally just quit, and we barely had enough momentum up the steep slope to pull to the side of the road.  As smoke started to come from under the hood, I looked at Lauren and just nervously said, “Wow, this has never happened before.”

After opening the "bonnet" and trying to figure out the next step, a motorcycle taxi carrying a spry, 50kg man and his scant bag of tools pulled over.  This “mechanic” hurriedly started working on my Landrover without saying a word.  The motorcycle taxi driver looked at me and said “Don’t worry…he will fix it.  This happens all the time.”  After releasing a few hoses, and removing a plug (which had a conspicuous red label next to it reading “This plug MUST NOT be removed”) he poured liters of water into the cooling system in an attempt to cool the overheated engine.  Two other “assistants” then arrived with large containers of anti-freeze/coolant, more “tools” and two bottles of Motor Honey (??).  After more fiddling, blowing, adding coolant, etc., the chief mechanic explained in broken English that the thermostat needed to be removed, and that it would only be a matter of removing two bolts.  Unfortunately, in the process of this “simple fix,” he stripped these bolts, making it impossible to extract the thermostat in the “normal way.”  Out, then, came a long screwdriver, which he used in an attempt to blindly open the rusted-shut thermostat through a long, deep hole.  After struggling for what seemed like an hour, all of a sudden, he acted as if he got it, and motioned for me to start the Landrover.  After much sputtering, it finally started.  At this, the mechanic declared the job complete, and he, his two assistants, and the motorcycle driver were ready to “settle accounts.”  Their charges were steep, but with little choice, and just happy to have a seemingly working vehicle, I gave them all I had (and even borrowed from Lauren who was patiently enduring this entire ordeal).

The four happy men waved as we drove off (with big smiles on their faces for obvious reasons) and the car worked perfectly… for at least 45 minutes until it overheated again.  This time, the situation was more serious as it had started to rain, and it was now fully dusk.  Again, within a few minutes of pulling off the side of the road, a miscellaneous mechanic came to our assistance, and with my broken Kiswahili, I communicated what had happened just minutes before.  He explained that all that needed to be done was to remove the rusted thermostat, and we would be on our way again.  Since the two bolts had been thoroughly stripped by the previous pit crew, I knew this would be no simple task.   After nearly two hours, under the illumination of Lauren’s headlamp (which, in the end, was unfortunately stolen by the person holding it for us), rain coming down, he was finally able to remove the stripped bolts and the rusted thermostat.  Again, the car started, but now the engine sounded strange, pointing to the fact that the cylinder head was warped from the excessive temperatures.  At this point, I didn’t care, and just wanted to get Lauren safely to Tenwek.  So I borrowed more money from her, paid this second mechanic for his work, and headed back on the road, which was now very dark and unfamiliar.  The gage again registered excessive heats, and the strange noises coming from the engine continued.  All we could do was just pray and persevere until finally, after 9pm, we arrived at Tenwek.

So the major question I had for God through this ordeal was this: “Why would You let his happen to me (not to mention Lauren, who I am recruiting to come to Tenwek long term), when I am already overworked, overstressed, overcommitted, and just plain overwhelmed?”  His answer came through James 1:2-4: “Count it all joy, my brothers, when you meet trials of various kinds, for you know that the testing of your faith produces steadfastness.  And let steadfastness have it full effect, that you may be perfect and complete, lacking in nothing.”  Essentially, God was saying, “I am very interested in building your faith, and to do this, in my paradoxical way, I use trials.”  God, the founder and perfecter of my faith, in his sovereign love, had used my unfaithful Defender to bring me one small step closer toward a deeper faith in Him.  (Mostly, I was just thankful that Heather and Josie were not with us).

So after more repairs, the Galat Landrover is still not functioning at peak performance.  The excessive heat also damaged the turbo, and although working, the truck is running at about 50% power.  Perhaps it is time to sell the Defender and buy sometime more reliable?  Anyone interested in a “gently used” black Landrover?!

Thanks for your continual prayers for our family!  We appreciate you so much!

Posted by The Galat Family Kenya Update at 1:33 PM 5 comments: