The Obscure Missionaries of Tenwek 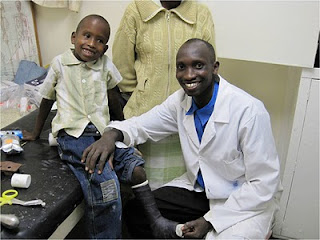 Solomon placing a cast on a young boy during a busy clinic day.

When I arrived in Kenya in November 2008, I was introduced to a Kenyan man named Solomon Rop, the head physiotherapist of the orthopedic department at Tenwek hospital. I quickly came to understand that he was much more than a physiotherapist, according to my western definition. In America, physical therapists help people recover from various musculoskeletal injuries through exercise, gait training and other modalities. But in Kenya, a physical therapist is more like a non-operative orthopedic surgeon, doing everything from conventional physical therapy, to correcting club feet, reducing and casting closed fractures, fitting prosthesis for patients with leg amputations, and even placing traction pins and halos (i.e. barbaric orthopedic devices).

The first day I spent in clinic, I pulled Solomon close to my side, and said “you ain’t going nowhere!” I needed him to help me navigate the myriad of patients with conditions that I had never seen before in my training. In one room was an 8 year old boy with pus draining from several sinuses in his leg from a chronic bone infection. Trying to be cool, I leaned toward Solomon, and said quietly, “What do I do with this one?” In another room was a 50 year old man with a femur fracture that was 5 inches short, and 8 months old. “How about this guy?” I said, losing more pride and confidence with every new patient seen. Very patiently, and never condescendingly, he would guide me through decision making processes that were completely foreign to me. Soon Solomon became more than a colleague, but a partner and close friend.

But beyond Solomon’s orthopedic knowledge and skills, and what became blaringly evident, was his commitment to tell patients about Christ (not just Solomon, but Meshack, Daniel, Joel, David, Vincent, Malel, Mailu and many others). In this way, we became true partners and brothers, missionaries working together to not only raise the standard of orthopedic care in this small part of the world, but to tell people of the only Hope that is true Hope. Underscoring this concept is the fact that all the Kenyan men and women who work at Tenwek (over 500) could be making two, sometimes three times what they earn at our small mission hospital, by working at one of the big government hospitals, while working less hours. And some are leaving for higher paying jobs. But for those who remain, when questioned about this, the common answer is, “God called me here, and this is where I belong.” Their example humbles and challenges me.

The work at Tenwek can only be done via partnership…all of us working together to bring glory to God. Where has God called you? Please keep these Kenyan missionaries in your prayers as you think of them. And as always, thank you for your prayers and support for our family!
Posted by The Galat Family Kenya Update at 8:08 PM 5 comments: 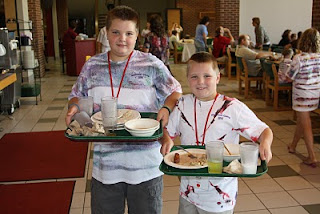 Our family just returned from a three week trip back to the Midwest, visiting family and going to a church camp at Huntington College in Indiana, the theme this year being Crazy Love taken from the book by Francis Chan. We had an incredible time with family, and reconnected with many old friends from this same church camp where, years ago, before we were married, Heather and I kindled our relationship. As missionaries, we had many opportunities to tell of the work God is doing in Kenya at Tenwek Hospital, and I preached a sermon on the Holiness of God.
Early in the week of camp, I noticed two young boys working hard carrying trays in the cafeteria at lunchtime. “Who are those boys and what are they doing?” I asked a friend. “They are the Howell boys from Ontario Christian Fellowship, and they are carrying food trays for tips, to earn money for world missions,” she said...“They do this every year.” I thought to myself, “How cool that these boys are doing this work,” as I handed Jeffrey two bucks to carry my tray.
The next day at breakfast, I noticed Jeffrey and his brother Jace still hard at work. Later, at the morning general assembly, the camp director announced that the money the Howell boys were earning was going toward the Mission at Tenwek Hospital, a decision made by the boys themselves, and that an anonymous donor was going to match whatever was given by 20%! I was incredibly humbled by these boys, and excited to see what God was going to do for Tenwek.
As the week wore on, the Howell boys continued their relentless service. I could tell they were getting tired and the trays were heavy. Moreover, there were many other fun activities around the camp for young boys to occupy themselves besides carrying people’s dirty trays with melted ice cream, half eaten sandwiches, and stray dollops of mayonnaise greasing fingers and staining clothes. But they persevered in a way that puts me to shame, and reminded me of the truth that our walk with Christ is sometimes hard, sometimes discouraging, in a word, paradoxical, but the joyful treasure that is gained (that is, Christ himself) is so worth it in the end.
At the last service on Sunday morning, the results were in…the Howell boys had collected, after an entire week of carrying trays at every meal, over $1,000. Additionally, five other anonymous donors also agreed to match the amount given by 20% (for a total of 120%) making the grand total raised for Tenwek Hospital over $2,300! More than the funds (although the generosity of all the camp attendees was incredible, and we are thankful for the money to help the poor at Tenwek), was the lessons that I (and others) learned from two boys, ages 11 and 8, about perseverance, radical service, finishing well, and ultimately loving Christ and others. I look forward to what God does through these boys in the future!
2 Cor. 9:13 Because of the service by which you have proved yourselves, men will praise God for the obedience that accompanies your confession of the gospel of Christ, and for your generosity in sharing with them and with everyone else.
Col. 3:17 And whatever you do, whether in word or deed, do it all in the name of the Lord Jesus, giving thanks to God the Father through him.
Posted by The Galat Family Kenya Update at 11:51 AM 1 comment: