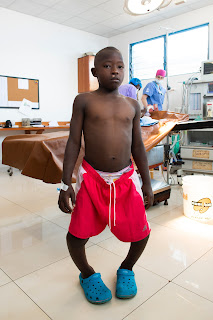 Aimé's case of Blount's Disease or Tibia Vara was quite severe. 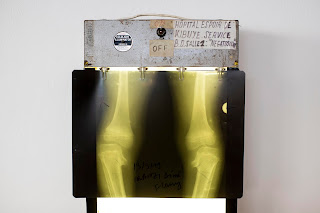 X-rays showing that the inside portions of both proximal tibia are severely sloped downward causing the bow-legged deformity. 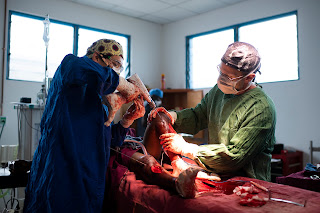 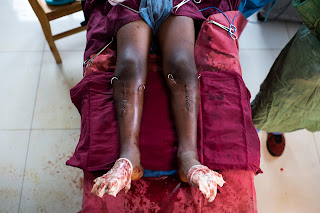 After shot of both legs now straight and with good rotation (God was present!) 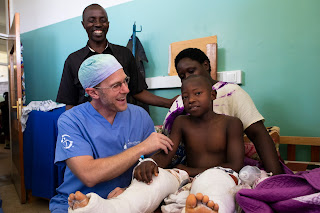 This past week, I’ve been at Hope Kibuye Hospital in rural Burundi, East Africa participating in World Medical Mission’s first sub-specialty orthopaedic outreach.  The fact that I am even here is a miracle, because in my busyness of life and work at Kijabe, I didn’t even think to confirm that I needed a visa to enter the country (unlike all other African countries I’ve visited where my American passport allows me to buy a visa at the airport).  And so, on Sunday morning, as Dr. Jomo (my 4thyear resident at Kijabe and accomplice to Kibuye) were about to board our flight, I was denied. “Go on ahead without me,” I encouraged Jomo as he looked at me wide-eyed.  “You get started on cases tomorrow, and I’ll catch up with you as soon as I can,” I said, knowing that to get a visa to join the outreach that week would take an absolute miracle.

Little did I know, however, that there was a boy in Burundi named Aimé Fleury whose father and mother, along with their entire church had been praying and fasting for Aimé’s needed surgery to correct his severely crooked legs.  And little did I know that after Jomo and I parted ways, he called his Burundian friend Gad, whose father has serious connections in the Burundi Department of Immigrations.  Long story short, by Monday afternoon I had a visa stamped in my passport and by Tuesday morning, I was scrubbing cases with a grateful Jomo and the team here in Kibuye. The repeated response from everyone was, “How are you even here?” as the normal time to get a visa for Burundi is more than 10 days.

I met Aimé the following afternoon as he was being prepared for surgery; an active, muscular 9-year-old boy with the worst case of Blount’s disease I’ve ever seen.  As an orthopod who does very little pediatric orthopaedics, I prayed to myself, “God, unless you help me with this one, it won't be pretty.”  As the patient was being wheeled to theatre, I met Aimé’s father, who explained that the meaning of his son’s name was “A Beloved Flower” and that his entire church had been praying and fasting for the success of his surgery since Sunday.  It was clear that this son was truly loved, and that God brought him to this small hospital for a purpose.  I relaxed a little as I realized I had no choice but to somehow let God work through our feeble hands to be an answer to the faithful prayers of so many.

There are times in the operating room when we can sense the presence of God with us, and this was one of those times.  Fixing Amié's crooked legs required multiple cuts in multiple planes to realign, and then stabilize the bones with wires through the skin – all without the benefit of any intraoperative imaging (no C-ARM available at Kibuye).  But after finishing the case, I was pleasantly surprised at how normal the legs looked.  Ted (World Medical Mission post-resident general surgeon at Kibuye) and I bumped fists as all in the room felt like we were on sacred ground.  We said a prayer of healing and protection for Aimé and wheeled him back to his father.  David (Samaritan’s Purse photographer who snapped all photos) showed him the before and after pictures, and his father said in amazement, “Those are his legs?!”

So many deep and humbling lessons from this story: the power of faithful prayers of a small congregation in rural Africa, the love of a father, God’s help and strength in our absolute weakness.  In the end, I was reminded that there is much going on behind the scenes that is so far beyond us (it’s not about us), but as we make ourselves available to God in our weakness, we see His miracles unfold firsthand, as we become the hands and feet of Christ to one another. Not for our glory, but for His alone!  Please pray for Aimé, that he would heal without complications or infections, that he would walk with perfectly straight legs someday, and realize that he is a Beloved Flower of his Father in Heaven.

Thanks for all your prayers and support!
Posted by The Galat Family Kenya Update at 1:08 PM

God was indeed at work. Blessings to you and the rest of the team for such good work

This is a true miracle, keep serving Dr. Dan

This is beautiful! As you said, to God be the glory!

I am here to give testimony on how this powerful spell caster called Dr. padman helped me to fix my relationship. I was heartbroken when my Lover told me he is no longer interested in marrying me because another lady has used a black magic on him. I cried and sobbed every day, until it got so bad that I reached out to the Internet for help, that was when i read a review about the great work of Dr. padman then contacted him for help to get my love and my life back, he helped me cast a powerful love spell and to my greatest surprise after 24 hours of doing the love spell my lover came back on his knees begging me to forgive him We are now happily married and all thanks goes to Dr. Padman Wonders for helping me save my relationship you can contact Dr padman via Email padmanlovespell@yahoo.com or info@padmanspell.com Website: https://padmanspell.com/index-3.html or WhatsApp
+19492293867