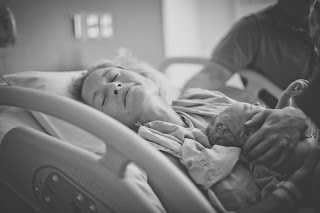 After personally witnessing what Heather describes as “the most difficult labor of the five,” I have been reflecting on a subject that has honestly perplexed me over the years: pain and suffering.   In the weeks leading up to the birth of our new baby girl, Josie Grace, our two main prayers were for (1) a healthy baby and (2) a quick and relatively easy labor and delivery.   With the myriad of potential problems that could possibly occur during pregnancy and delivery, we were so thankful for the answer to prayer #1.  But prayer #2 was a different story, as in the end, the labor was certainly not quick, nor easy.  Heather pre-decided that this birth would be completely “natural” (or un-medicated as it is described in 2013), not because Heather has some amazing pain tolerance (her words) but because of a previous complication from an epidural when Emma was born.  In her mind, the pain experienced during child birth was nothing compared to a week-long spinal headache from a botched epidural.  Levi was also born “naturally” but his labor and delivery were within a few hours of arrival at the hospital.  So we were figuring little Josie Grace would come in the same way.


Heather was admitted to the hospital the afternoon of the 13th with fairly regular, but light contractions.  After several hours, we decided with the midwife that it would be best to “break her water” to hasten the process.  Shortly thereafter, hard labor began, and Heather spent almost the entire night laboring in the shower, with contractions coming fast and hard.  At 6am, exhausted, the midwife suggested that Heather get in bed so that she might check her progress, and we were distraught to discover that after all that work, she was only 3cm dilated.  “I can’t do this any longer,” Heather whispered, clearly discouraged at the slow progress.  “God help her,” I thought as I had her roll onto her side to continue this trial of labor.  What happened next was quite amazing.  Hooked to the monitor, I was able to see the baby’s heart rate and the onset, strength and duration of each contraction.  Lying on her side, the contractions became widely spaced (approx. 8-10 minutes apart) which allowed Heather to sleep soundly during each interim.  When each contraction came, however, Heather would abruptly awaken and work, with difficulty, through each extremely long and hard episode while I rubbed her back and helped her breathe.  This continued for the next 5 long hours, and what I thought was a slowing of the process with widely spaced contractions, was actually God allowing Heather to rest and prepare for the last “final push.”


When the time for pushing began, we discovered that the reason the labor had been so long (aside from the fact that she was the biggest baby Heather had delivered), was because Josie’s head was turned 180 degrees.  As such, pushing was no easy task either, and after what seemed like an eternity, Josie finally arrived, almost 24 hours after admission, with a massive cone-shaped head from being squeezed through a disproportionately small space.  As the midwife placed Josie on Heather’s chest, her face radiated sheer relief and joy.  “You did it!” I exclaimed, personally trying to hold back my own tears of joy and relief.


As I reflect on this incredible and almost surreal experience, what impresses me is the fact that God did not answer prayer #2 in the way I thought He should have.  He did NOT deliver Heather from suffering, but delivered her through it.  He did not lessen the pain, make it go away, or even shorten it.  It was all there in its full, visceral, unbelievable “glory.”  But God did provide the help she needed, when she needed it, so that she might persevere until the task was complete.  And the relief and joy that resulted was indescribable.  The analogy to our spiritual lives is striking.  God never promised to shelter us from trials, suffering or pain (contrary to the teaching of many well-meaning, but incorrect Christians).  In fact, Jesus communicated clearly and with absolute certainty that pain would come, and that when it did, it would not be easy.  So where then is our hope in the center of our pain?  Only one place...Jesus.  After all, he had his body scourged, his beard plucked, a crown of sharp thorns crushed on his head, and his hand and feet nailed through to a cross, not to mention being betrayed, ridiculed and abandoned.  And somehow, I don’t think that He was shielded from any bit of that unimaginable pain.  But He persevered through it, overcame, and arose to utter and complete joy.  Jesus, God in the flesh, overcame, and as we put our hope and trust in Him, so will we, and thus, experience that same intense joy that can only come through suffering.  We may not understand it, but we can have the faith to believe God at his Word, that He will cause us to persevere, that (somehow) there is purpose in the pain, and that the end result will be joy unspeakable.
Posted by The Galat Family Kenya Update at 4:49 PM

Tears of joy....! We are so thankful for Josie's safe (though difficult!) arrival. Richest blessings friends...
Caroline and Jeremy