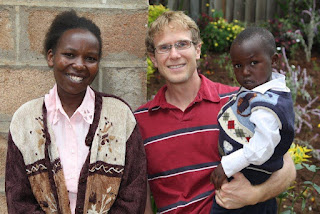 (Story told with permission from patient).


Whilst walking home from language class (our family has been engaged in full-time language study learning Kiswahili, one of the two official languages of Kenya, in an attempt to master a language that some call “easy” but which, [being over the age of 40], I call challenging, especially since in Kiswahili there are 8 nouns classes, each with their own “agreements” for corresponding verbs, adjectives, adverbs, linking words, etc.), I heard a voice call out my name: "Daktari Kalad!" (in the local Kipsigis language, the letter G is pronounced with a K, and the letter T with a D).  Quite tired and not too excited to engage in another lengthy conversation in which I attempt to use a little Kiswahili and the other speaker some broken English, I slowly turned wondering who I might encounter.  I saw a vaguely familiar, middle-aged woman who walked toward me with a slight right-sided limp.  “Do you remember me?” she said with a thick, local-vernacular accent.  Trying to buy some time while jogging my memory, yet being savvy enough to use a little deductive reasoning (i.e. noticing her limp), I said, “Yes, you were one of my patients, right?”  A big smile appeared on her face, and as she reminded me of her story, the memory of her accident slowly returned.
In December 2009, while returning with family members from a wedding in western Kenya, just a few days before Christmas, the matatu she was riding in, stuffed with 17 people, lost control, veered off the road, and rolled several times.  One family member died instantly, and several were injured badly, including Amy, who fractured her left femur and right hip.  The injured were taken to Tenwek and Amy underwent nailing of her left femur and ORIF of the right hip the day before Christmas.  Although she was in the hospital for several weeks after her surgery, like so many of our patients, at discharge, she disappeared, falling into the deep abyss that I call “lost to follow-up.”  Now, a little over two years from her injuries, she “reappears,” walking, looking healthy, and now very happy.  “May I come for a visit?” she asked without hesitation.  “You are welcome,” I responded, a little hesitant at what such a visit might bring, yet at the same time sensing God might have something in store.
A few days later, Amy appeared at the worst time, as I had several workers at our house fixing problems related to electricity and the strong shocks we were receiving while washing dishes (?).   “Can you come back another time?” I asked, probably with a slight look of frustration related to the seemingly endless issues that accompany living in an old house.  “I will come back” she said without the least amount of disappointment, and limped off.  Two days later, she returned, this time with her youngest son, and since I now had time to sit and listen, she told me the rest of the story.  Amy is a tailor by trade, and her husband John had been a pastor with the local Africa Gospel Church.  For several years, they lived on a combined income of only 2000 Kenyan Shillings a month (about $30).  After her accident in 2009, hospital bills, combined with Amy's inability to work, pushed their family into deeper poverty.  To make matters worse, in January 2012, John lost his job pastoring his small church as the members were longer able to pay his salary, and, as a result, also had to drop out of bible school, being only one year from finishing.  What little they did have they were using to buy food.
As we regularly have people stop by our house asking for food, school fees, and various other sorts of assistance, I was waiting for Amy to “drop the bomb” and ask for money.  However, she did not, and only said that she wanted to stop by to thank me personally for allowing God to use my hands to help her, and to simply ask for prayer.  I happy obliged, and while praying for God’s provision for this family, I felt that perhaps God was asking me to do more than just be her surgeon.  However, I have learned to be more cautious over the years (having been burnt several times) and first thought I should enquire into their situation with the local church to see is their need was truly legitimate.  After asking both pastors at our church about this young couple, they responded by saying, “Daktari, they have true need…if you can help them, please do.”
Long story short, our mission agency is allowing us to use funds from our Galat ministry account to provide the remainder of John’s tuition to finish his degree.  Our hope is that John and Amy will be able to continue in ministry, full-time, proclaiming to others all that God has done for them.  And we are privileged to be a part of their lives, as their story has returned to us, now full-circle after that initial meeting over two years ago in the Tenwek Casualty.  Thank you for partnering with us in this ministry that allows us to help patients like Amy and her family.  We appreciate your prayers and support!


Proverbs 22:2 Rich and poor have this in common: The Lord is the Maker of them all.
Posted by The Galat Family Kenya Update at 1:09 PM