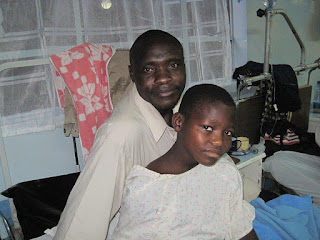 Two weeks ago, a young 13 year old boy named Washington was admitted to Tenwek after his leg was crushed by a boulder which fell on him while he was bathing in a river. He arrived more than 24 hours after the injury, having been first “treated” at a small hospital near his hometown. His shattered shin bone was plainly visible beneath a huge defect in the surrounding skin. The dirtiness of the river water, combined with the severity of the open wounds and delay in adequate treatment, meant that infection would be inevitable and difficult to treat.

I spoke with the boy’s father, a young man himself in his 30s, not wanting to paint a false picture, explaining that although we would do what we could to save his son’s leg, amputation might be unavoidable. The man seemed to understand and said, “Please do what you can.” So I prayed with him, asking God to do a miracle.

What followed was a series of surgeries to try to control the infection. At Tenwek, for pediatric patients, we use a drug called ketamine, a relative to PCP (angel dust) to provide sedation for short surgical procedures. Ketamine produces a “dissociative anesthesia,” meaning that although the patient is completely awake during the procedure, he neither feels pain, nor is cognizant of his environment. Often, patients under ketamine communicate very interesting things, and, like a truth serum, can reveal the deeper contents of the heart. Washington told us during his first surgery (in which we removed a large amount of dead skin and bone), in very good English: “My name is Washington, as in Washington D.C., and when I grow up, I want to be a doctor.” Then, speaking in Swahili, over and over again he said the word “babba” followed by the same repeated phrase. I asked the scrub techs what he was saying and they translated, “Daddy, don’t leave me.” And his daddy never did, always sitting by his side in the pediatric ward, constantly there.

At first, it looked as if the infection was under control. However, a few days ago, the leg took a major turn for the worse. Despite multiple surgical debridements and treatment with three IV antibiotics, a foul smell began to emanate from the wound, and Washington spiked high fevers. I spoke again with Washington’s dad, explaining the next surgery would need to be an amputation. “How will he walk?” the father understandably asked with a combined look of anger and desperation. Although I try to avoid making promises I may not be able to keep, I told him, “I will personally make sure he gets a good prosthesis from the U.S.”

My experience with Washington and his father opened my eyes to finally notice the many other fathers on the pediatric ward, constantly there, offering comfort in the midst of tragedy and pain. They remind me of our true Father, whose perfectly strong and tenacious love never lets us go…constantly patient…continually there…comforting when we are hurting…upholding when we are weak…providing hope in the midst of darkness.

Romans 8:15: For you did not receive the spirit of slavery to fall back into fear, but you have received the Spirit of adoption as sons, by whom we cry, “Abba! Father!”

If you would like to donate to Tenwek’s Compassionate Surgical Fund, which helps patients like Washington, please email donations@wgm.org and mention project ID 125-35224. Thanks for all your support of our family!
Posted by The Galat Family Kenya Update at 10:40 AM

I continue to appreciate these updates so very much. We feel blessed to be even a small part of your support team. I hope you are both well and taking very good care of yourselves!