A New Hip for Maggie 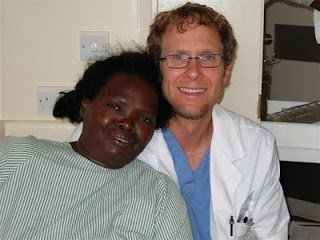 Maggie the second day after surgery. 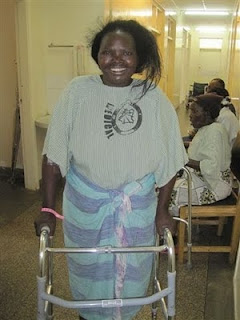 The day after surgery, Maggie was already walking! 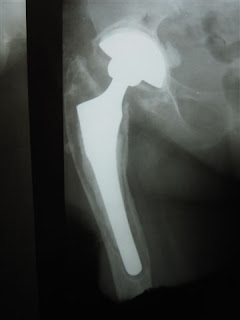 Maggie's preop films demonstrate a black line around all the parts, indicating that they are loose. 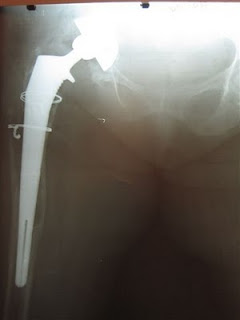 Last fall, while spending a few days in Nairobi resting and restocking supplies, our family (and Stephen Leimgruber, Heather’s cousin/RN who has been working with me in orthopedics for the past year) visited Amani Ya Juu, a ministry for marginalized women in Africa. At Amani, women needing a second chance are trained to create and sew a myriad of items from quilts to aprons, which are then sold at the Amani store, proceeds benefiting the women who live and work at the mission. While Heather and the girls love to visit the store and browse through the beautiful crafts, let’s just say that it wouldn’t be the first-choice hangout spot for the guys (there is even an “Amani Café” on the premises, which serves up non-masculine items such as tomato soup and blue cheese and pecan salad).
Earlier that particular day, feeling quite good about myself, and noting all the needy people in and around Nairobi, I was giving the kids one of my “fatherly lectures” on intentional ministry to strangers, saying that “we need to be willing to sacrifice our own agenda when an obvious need comes to our attention,” rather than turning a blind eye. While at Amani, Stephen decided to test me, to see if I “practiced what I preached,” by introducing me to Maggie, who works in the store at Amani, greeting every customer with a big smile and a hug. Stephen noted that she had a terrible limp, and thought perhaps there was something we could do for her. The desire to protect “my time” while on “R&R” in Nairobi, coupled with my desire to be doing some other activity during our precious few days away from the daily pressures of orthopedics at Tenwek other than shopping, mixed with a general dislike for random “curb-side” consults, made my initial greeting less enthusiastic. However, Maggie’s warm personality, and obvious pain with every step, quickly endeared me to her, and as she shared her story, I began to feel that this meeting was not random.

Maggie, now 35 years old, had been in an automobile accident at age 16, and injured her right hip. After 8 surgeries (the last being a repeat hip replacement in 2001), she now felt daily pain, with the sensation that the components in her hip where moving with every step, and she resigned herself to the fact that she would never be able to walk well again. However, amazingly, her joy and obvious love for others and for God were completely untouched by her grim circumstances. I told Maggie she should get some x-rays, and I would return the following day to look at them to determine if there was anything remotely possible that we, at Tenwek, could do to help. My skepticism was strengthened when I viewed her x-rays, which showed an obviously loose cemented hip replacement with significant bone loss, problems which were most likely the result of a chronic infection induced during one of her previous 8 surgeries. In my mind, I knew there was absolutely no way we could tackle her huge problem at Tenwek, and the only solution would be to try to get her to the U.S. for her needed surgery (which also seemed impossible with the huge expense). I told Maggie I would do what I could with my connections in the States, and left her with instructions to lose weight, and to see a physiotherapist to help strengthen the muscles around her hip. After two meetings, I felt like I had known her for years.
After several initially hopeful, but ultimately unfruitful leads for Maggie to come to the U.S. for surgery, I too resigned myself to the fact that she was beyond help. But, as is so often the case in these seemingly hopeless situations, when people are praying and when God is sovereignly directing, what we think is impossible becomes unstoppable. In February, when I emailed Dr. Wes Mesko (the joint replacement surgeon from Michigan who comes yearly to Tenwek for the annual Total Joint Replacement week) about Maggie, he felt that if we had the right components, and assuming the current hip was not infected, we could do her surgery right here at Tenwek. When I emailed Rose (the Johnson and Johnson rep in Nairobi who supplies our hip and knee components), to see if her company had these special revision parts in stock, amazingly, they did. During a return trip to Nairobi later that month, I called Maggie to tell her the news and she excitedly insisted I come to Amani immediately to see her. She looked like a different person, having lost over 30 lbs; and her limp (and pain), after months of physiotherapy, had dramatically improved. However, with loose components, surgery was still necessary, and Maggie was given a surgery date.

Maggie’s surgery, which happened just this past week, was one of those cases in which we felt like God was directing every step. With so many variables needing to occur simultaneously for a big surgery like this to even occur, let alone be successful, and with so many things that could have potentially gone wrong in this environment, miraculously, everything went perfectly. I am convinced that we witnessed a modern day “Miracle at Tenwek.” And just today, I checked all of the bacterial cultures we took during surgery, and every single one was negative! Maggie is so thankful because her surgery was possible through donations to our project account at Samaritan’s Purse. In addition to Maggie, eleven other patients had joint replacements, and thankfully, everyone did great, and most are already discharged. God sovereignly blessed the week, and I personally enjoyed taking a break from trauma to do these surgeries with Dr. Mesko (who, as a joint replacement specialist, taught me many of his valuable “tricks”).
I am humbled (yet again), and reminded of our smallness and God’s greatness, yet His desire to break in and miraculously touch the lives of people such as Maggie. This is God’s work, not ours, at Tenwek, and he is using it to glorify his son, Jesus Christ, in whose name patients are helped. Thank you for your ongoing prayers and support of the orthopedic ministry at Tenwek…without this partnership, this work would not be possible. Please continue to pray for Maggie and all the patients at Tenwek that God would be glorified in their lives.
Matt. 20:30-34 Two blind men were sitting by the roadside, and when they heard that Jesus was going by, they shouted, "Lord, Son of David, have mercy on us!" The crowd rebuked them and told them to be quiet, but they shouted all the louder, "Lord, Son of David, have mercy on us!" Jesus stopped and called them. "What do you want me to do for you?" he asked. "Lord," they answered, "we want our sight." Jesus had compassion on them and touched their eyes. Immediately they received their sight and followed him.

Posted by The Galat Family Kenya Update at 6:08 AM

Great story brother. Glad the cultures all came back no growth. May God continue to give you such patients, chuckle.
Keep those updates coming.
In Christ
Dennis and Cindy McCutcheon
Vine International Guatemala

Amazing and soo cool. I love the statement: "things that seem impossible become unstoppable". Praying for you all. ~Sarah (Tim)

Awesome story. Thanks for sharing, it is great to see how God continues to work through you.

Thank you for your service to Maggie. My family and I have known this dear woman for many years through Amani and she has selflessly prayed for me and my family. I am thankful now her prayers are being answered. May God bless you as you continue to listen to Him and use your skill for His Glory. Peace,
Debbie Noetzel

Thank you for helping Maggie. I really cant say enough to thank you. She has been such an inspiration to me.

I feel so blessed to have people like you and your family in the world.

Thank you so mcuh for helping Maggie. please tell her taht Anne trufant is overjoyed to hear this news!!!! We have prayed for so long that she would get help. God is good and you are His listening servant. thank you from North Carolina and please give MAGGIE a big hug from all the Trufants.
Anne Trufant

thanks so much for helping maggie! we have known maggie for years and have prayed for help and relief for her for a long time...can't wait to see her walking much more freely...
graig and sara austin

Thanks for being an answer to my prayers of the past two years!!! I met Maggie in the Amani shop in Aug. 2008 and have been praying for her ever since. We are in the U.S. now and THRILLED to hear about her surgery. Great news. Maggie is a deserving woman and you are an instrument of the living God!!!!!

We also know Maggie and are delighted to see that her surgery was successful. Thank you!