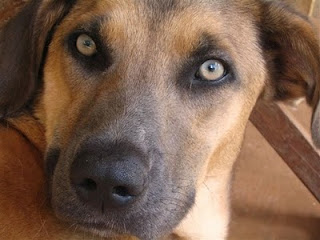 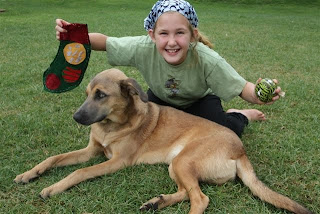 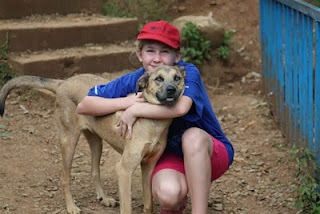 The classic saying goes “it is better to have loved and lost, than never to have loved at all.” With our departure to the states coming up in less than three weeks, we, as a family, have been praying for a good home for Samson, Emma’s “rescue” puppy from the local Umoja orphanage. Emma first met Samson a year and a half ago, when we visited the orphanage with my brother John. He was a subdued, mangy, flea-bitten, scrawny, half-starved, ugly puppy, tied to a three foot length of chain. But from the first time Emma saw him, despite his hideousness, she loved him, and begged to take him home. After a few other visits to the orphanage, and continual requests from Emma (and from the orphanage director) to take him home, I finally relented and on June 14th, 2009, Samson was officially adopted into the Galat family, much to Emma’s delight, and Heather’s chagrin.
With “proper” diet (including Emma’s frequent “breakfasts in bed” for Samson) and smothering love (and several flea baths, immunizations, Frontline, etc.), Samson grew into a large, healthy, and beautiful dog, with bright eyes and laidback personality. As my brother John said, “Samson is the quintessential doggie version of a ‘rags to riches’ story.” Samson had the reputation of being somewhat fat and lazy, which I attributed to living the deserved “good life” after so many initial months of hardship. Several weeks ago, however, we noticed that Samson was becoming more lazy than usual, and slowly, he started to lose his excess poundage. After a round of antibiotics for what was thought to be a bladder infection, he seemed to perk up. However, last weekend, he dramatically worsened, stopped eating and drinking, and by midweek, his gums and eye sclera turned vividly yellow, indicating that his liver was failing, likely secondary to a massive infection that was unresponsive to several antibiotics.

With all the hats that a missionary surgeon wears, the last role I ever thought I would play is that of veterinarian. But on Thursday, after long and tearful goodbyes from the kids, Samson was put to sleep with the most pleasant concoction of drugs I could muster from the Tenwek formulary. A grave was dug next to Sandy, the Chupp’s dog who also passed about 18 months ago (so they could “keep each other company”), a small service was held with several missionary children and Kenyans, and Samson was laid to rest. Emma managed to cram 15 years of dog love into one very full and very intense year. Through her tears, Emma told me she doesn’t think she has any dog love left because she spent it all on Samson… and if you were here to witness it, you would fully agree.

That intense kind of love, the kind that looks through ugliness and sees the potential for what could be, reminds me of the kind of love the Father has for us, who despite our sinfulness, our hideousness, loves us because He loves his Son, who redeemed us , and cleansed us by His blood. Thank you Emma for this lesson, and farewell Samson…you were loved.
Job 1:21 “The LORD gave and the LORD has taken away; blessed be the name of the LORD.”

Posted by The Galat Family Kenya Update at 2:09 PM

What a beautiful illustration of God's love for us! We are so sorry for your loss. We still remember the pain of losing our pup, in a similar way, a couple years ago. It sounds like Emma will have lots of wonderful memories to remember Samson by!

Emma, I sorrow with you. I am anna, Barb Pinkley's friend. She sent me word of your loss of Samson. On Dec. 4, 1994, I lost my Foley girl, a little stray I found in Alabama. Like you, I felt I had given All my Love to her. But, in 2003, a little gal named Nikki needed some help to heal after eye surgery. She is still my 'bestest' buddy and sitting here with me now. Yes, the love you felt for Samson, is the kind our Lord has for us. May He help you in your grief and also knowing the love you gave Samson is never lost. anna probert e-mail: amprobert@peoplepc.com