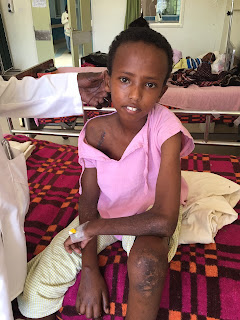 My second week at Kijabe, a clinical officer came for advice on a perplexing case of a young, 12-year-old boy with multiple joint pains and fevers.  “I think it’s a case of juvenile rheumatoid arthritis,” he said, “but it could also be infection.”  “Let’s go take a took,” I said curiously, as his lab work showed a markedly elevated white count and ESR, findings more consistent with a diagnosis of septic arthritis.  However, this condition is rarely seen in multiple joints simultaneously, unless the patient also had some hidden source of infection, showering the bloodstream with bacteria.

When we came to Adan’s bedside, his body was burning with fever, and he looked rather ill.  Everywhere I touched hurt, but the slightest movement of his right shoulder, right elbow and left ankle caused excruciating pain.   A quick aspiration of his shoulder joint with a large-bore needle confirmed what we suspected: pus.  Thus, plans were made to take him to the operating room for urgent washout of these multiple joints.

In theatre, Dr. John Deng (general surgery resident) and I started with the shoulder as Dr. John Weston (a visiting resident from Mayo) worked on the ankle.  As the capsule of the shoulder joint was pierced, pus under pressure oozed copiously and continued as we "milked" the arm upwards.  After opening the elbow joint, we found the same.  The entire fibrous covering (periosteum) of the humerus was elevated off the bone and a large pocket of pus communicated with both joints above and below.  Dr. Weston also found pus in the ankle, less than the shoulder and elbow, but still present.  Cultures were taken, and antibiotics were started.  Although we weren’t certain why multiple joints were infected, after these thorough washouts, we expected the pain and fevers to quickly diminish.

However, this was not the case.  Over the next 48 hours, this fevers climbed even higher, and his white count was not dropping, despite being on strong antibiotics.  Cultures eventually grew staphylococcus aureus, a common bug for musculoskeletal infections, which was sensitive to the antibiotics he was receiving.  Daily, on morning rounds, I kept hoping to find him better.  However, he continued to spike fevers, and still looked quite ill.  “What are we missing?” I asked the team, as we examined him daily.  Finally, after about a week, one of the nurses noticed a small amount of pus oozing from a wound on the lateral side of his leg, opposite the original incision made to wash the ankle.  “Let’s just take him back to theatre and wash all these joints again” I said, still not convinced we were on to the true source of his ongoing fevers.

In the operating room, after Adan received general anesthesia, I was able to do a more thorough exam.  I noticed that the left thigh was slightly larger than the right…subtle, but notable.  To confirm my suspicion, I stuck a needle in his distal thigh and pus rolled into the syringe.  “This must be the problem,” I thought as I prepared to again wash out the joints and make new incisions to wash the lateral leg and thigh.  As I opened the thigh, I was shocked to find about a liter of pus that tracked in a pocket up to the level of his hip.   “How can so much hidden pus escape the examining eye of so many providers?”  I thought to myself, now fully convinced I had found the culprit of the ongoing fevers.  As expected, over the next few days, Adan’s temperature and white count finally normalized, and he slowly gained strength as he was transferred out of the ICU onto the general peds ward.  We never found the exact cause for his polyarticular septic arthritis and osteomyelitis, but we are thankful that he is on the mend.

The spiritual parallels to Adan’s story are salient.  Hidden sins of the heart, when left un-confessed and un-addressed, continue to fester and cause soul-sickness.   Perhaps even more deadly than the “spectacular” sins, the “small” sins of jealousy, greed, pride, anger, selfish ambition, and unbelief are more easily hidden and, as such, are commonly left untreated.  As a result, they can grow into an ugly abscess, jeopardizing our very life and faith.  Let’s be honest with each other.  We are all sinners and that is why we so desperately need a Savior – Jesus, the great physician.  Only He can perform divine surgery to open the hidden areas and place us on the path to healing.

Thanks for all your prayers and support!

Mark 2:17  “On hearing this, Jesus said to them, ‘It is not the healthy who need a doctor, but the sick.  I have not come to call the righteous, but sinners.’”
Posted by The Galat Family Kenya Update at 4:40 AM

Amazing story and parallel to scripture.

Wow...both the case, and the parallels. Kudos to the nurse for noticing the other wound! What an amazing team of doctors, nurses, and Jesus.

This is so true if we don't let go we only generate great scars within ourselves.

This is Incredible.. well said keep it up the good work