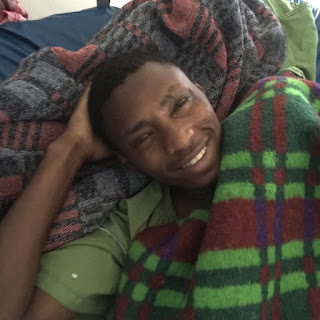 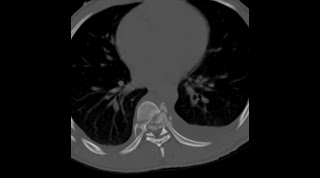 Original CT scan of the fracture of T7 vertebra. Bone fragments are pressing into the spinal canal, compressing the spinal cord. 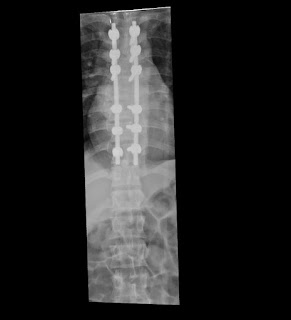 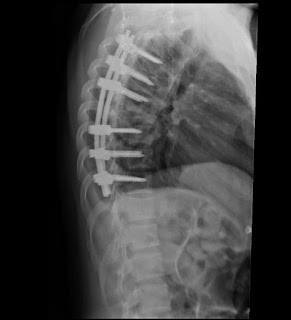 On my first day of work at Kijabe Hospital, I met a 20-year-old patient named Samuel, who had been involved in a terrible motorcycle accident resulting in a burst fracture of his T7 thoracic vertebra.  When he first presented to Kijabe (one week after the accident), Samuel was completely paralyzed from the abdomen down, without any motor and minimal sensory function in his lower extremities.  One of my new partners, Dr. Muchiri, had performed a decompression with posterior instrumented fusion from T4-T10 so that the patient could at least mobilize to a wheelchair.  Now, when I first met him, more than two weeks from his initial injury, Samuel was recovering from his surgery, and physiotherapy was beginning to work with him, teaching him how to live as a person with a new, permanent spinal cord injury.

Samuel’s affect was quite flat when I first met him, no doubt secondary to the realization that he would never walk again.  Spinal cord injuries in Kenya are at best, significantly challenging (as there are no disability provisions or laws in Kenya) and at worst, a “death sentence” (as patients, neglected by family and friends, often succumb to pneumonia, infected bedsores, or urinary tract infections).  My heart went out to Samuel as I was examined his legs, confirming that he was indeed paralyzed.  After my examination, I offered to pray for him, and he readily accepted.  I prayed simply that God would meet him in a meaningful way, and that he would be able to function well with his new condition.

Upon returning from a 3-day trip to Singapore for an orthopaedic training course, while rounding on patients in the morning, the team came to Samuel’s beside, and he was beaming.  “Anything new with Samuel,” I asked, hoping that he had gotten his wheelchair, and was progressing on schedule with therapy.  “Yes,” said Dr. Otido, rather dispassionately.  “He started walking about three days ago."  “What?” I said, looking searchingly at the team, entirely puzzled, as I had never seen, nor heard of a patient who made a complete recovery more than two weeks after such a spinal cord injury.   “Come again…you said he’s walking?!” I asked with emphasis.  “Yes,” said Dr. Okello, the orthopaedic resident.  “He’s been walking with crutches.”  Bewildered, I went to Samuel’s bedside to examine him myself.  I couldn’t believe what I was seeing… he had full sensation in both extremities, and was moving his legs, feet and toes as if he had never been injured (all the while smiling broadly).  I looked back at the team, and said, “This is a complete miracle!  There is no other way to explain this medically!”  Now Dr. Okello was the one looking puzzled.  “Daktari, you know…these things happen at mission hospitals,” he replied.   “Indeed,” I said, still amazed that I had witnessed a modern day miracle.  Later, I came to Samuel, and encouraged him with the truth that Jesus had heard our prayers and healed him.  He fully agreed and affirmed that he was a believer, a member of the Presbyterian Church in Kenya.

As I have processed Samuel’s case (myself and with other physicians), I am convinced that we have been privileged to witness a true miracle.  There is absolutely no way to explain it medically.  While recovery after such spinal cord injuries can occur, it is usually minimal (e.g. slight improvement in sensation by a level or two), especially in those who have demonstrated almost complete neurologic deficit for an extended period of time after initial injury.  But should I be so surprised?  Is anything too difficult for the One who in perfect wisdom created something as complex as the spinal cord?  Surely, “Who is like you, Lord God Almighty? You Lord, are mighty, and your faithfulness surrounds you.” Psalm 89:8.

Thanks for all your prayers and support which has sustained us over the years, and enables us to continue partnering with you in Kenya!
Posted by The Galat Family Kenya Update at 11:47 PM

You are doing a great job, I'm so proud of you. I am in Nairobi and I totally appreciate. Keep up the good work and continue informing us.

I am Alecia used every single spell worker on the internet, spent untold amounts of money and discovered they are all fakes…i was the fool though; doing the same thing over and over again and expecting different results. In the end, I decided that I wanted a tarot reading to know what my future held for me; I contacted a woman who lives locally to me and she told me about a man named (Dr Abalaka); he does not advertise on the internet, has another job for income, has no set prices, makes no false promises and refuses to help anyone that cannot be helped and even helps for free sometimes, he will give you proof before taking money. He is a wonderful man and he was the only person who actually gave me real results. I really hope he doesn’t mind me advertising his contact on the internet but I’m sure any help/ extra work will benefit him.contact him as dr.abalaka@outlook.com He travel sometimes.love marriage,finance, job promotion ,gambling voodoo,lottery Voodoo,poker voodoo,golf Voodoo,Law & Court case Spells,money voodoo,weigh loss voodoo,any sicknesses voodoo,Trouble in marriage,it’s all he does Hope this helps everyone that is in a desperate situation as I once was; I know how it feels to hold onto something and never have a chance to move on because of the false promises and then to feel trapped in wanting something
more. his cell phone number 5182932141 !

Congratulations for the good work.