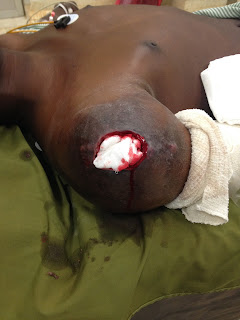 In the operating room, the right shoulder with bone-destroying mass which fungated through the skin and became a large, pus-draining wound. 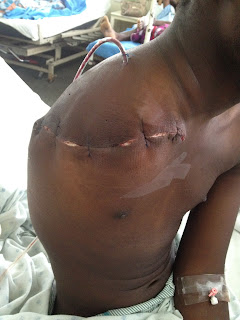 The incision for a forequarter amputation. 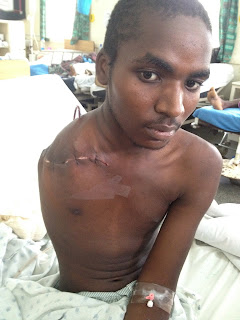 The day after surgery still sick, but feeling better. 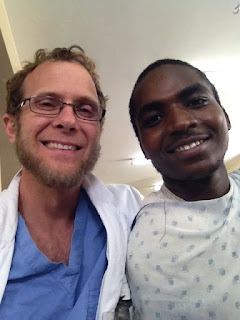 The second day after surgery, Andrew felt significantly better, as the source of pain and blood infection had been removed.  We are praying that the cancer margins are clear and that it will not recur.

Last weekend, while enjoying some time off with my family, I received an unexpected page from a visiting surgeon.  “I have an odd case I want to run by you,” he said apologetically, knowing I was not on call that night.  “An 18 year old boy presented to the emergency room tonight with a huge mass and an open wound on his right shoulder,” he said.  “He appeared very sick, with a white count of more than 20,000, so I took him to the operating room for a debridement, thinking this mass was secondary to an untreated infection…but we encountered significant bleeding which was very hard to control,” he continued.  Hearing this history, my mind went immediately to a condition we see frequently here, but only very rarely in the US: a highly aggressive bone cancer called osteosarcoma.   After explaining my opinion to the surgeon, he admitted that not once in his 25+ years of practice in the U.S. had he even seen an osteosarcoma, let alone one so advanced that it had fungated through the skin.

The following morning on rounds, I met Andrew and was surprised to find a young and handsome (yet sick appearing) man with excellent English.  He relayed that he was a college student studying computer science.  However, this mass has grown so aggressively painful that he found it difficult to attend classes.  Finally, when the cancer broke through the skin and became foul-smelling, the instructors asked him to leave and seek treatment.  I explained to Andrew that his x-rays showed the entire shoulder joint had been destroyed and that with the superimposed infection, with increased white blood count and high fevers, (really to save his life) the only solution was to remove the entire arm, including the shoulder blade, to the level of the chest wall, a surgery I had never desired to perform.

After obtaining consent, we took Andrew to theatre and gave him general anesthesia.  Upon removing the packing, which had been placed in his shoulder to control the bleeding, a bolus of bloody, and very foul-smelling pus gushed from the wound, filling the operating room with a sickening smell.  The arm was prepped and draped, and with the help of Dr. Heath Many (who isolated the large vessels to the right arm), we performed the first forequarter amputation at Tenwek.  While we did not see any tumor during surgery, we did find pus which had tracked all the way to his chest wall.  After washing well with a mixture of bleach and normal saline, I closed the wound loosely over a drain.

The following day, Andrew looked markedly better and no longer septic, the source of pain and massive infection having been removed.  I sat and talked with him, and he relayed a deep faith in God and a desire to trust Him no matter how his future would unfold.  I prayed for Andrew, and that his heart would be encouraged and that God would completely heal him of this cancer.  The results of the biopsy will be available in approximately two weeks, and if our suspicion is confirmed, he will still need chemotherapy, as a tumor of this size most certainly has metastasized to other areas of his body (although not immediately evident on our workup).

Even after seven years at Tenwek, I am still routinely amazed at the level of orthopaedic pathology we encounter here.  In the past two weeks, we have seen not one, but four cases of the same type of massive osteosarcoma.  Patients come daily with multi-trauma and open fractures that would rival the busiest centers in the U.S.  And just last week, we recorded our 1500th patient having received a SIGN nail.  But what amazes me more so, is the opportunity this busy service provides to share the love of Christ with our patients.  Yesterday on rounds, after seeing the young men in our open 10-bed ortho ward, I took a few minutes to encourage these men to follow Christ.  While turning to leave, one man said out loud, “If we want to follow Jesus, can we raise our hands while you pray for us?”  Before I knew it, 8 men had their hands high in the air as I prayed for spiritual and physical healing.  Later in the day, I saw 4 of these men outside, basking in the sun, and they pulled me over to enquire about bibles.  The opportunities of both word and deed at Tenwek are unending.

Thanks for your ongoing prayers and support for this ministry here at Tenwek.  We love and appreciate you all!

Posted by The Galat Family Kenya Update at 8:07 AM

God's work is amzing when done by amzing people, Glory be to the most hi God. Live long Galat Family

How amazing to have great servants of God caring for physical and spiritual illnesses.This is a touching story and am praying for Andrew.God BLESS the work of your hands the Galats and all doctors here in Tenwek