The Gold-digger, a Groin Flap and the DJ 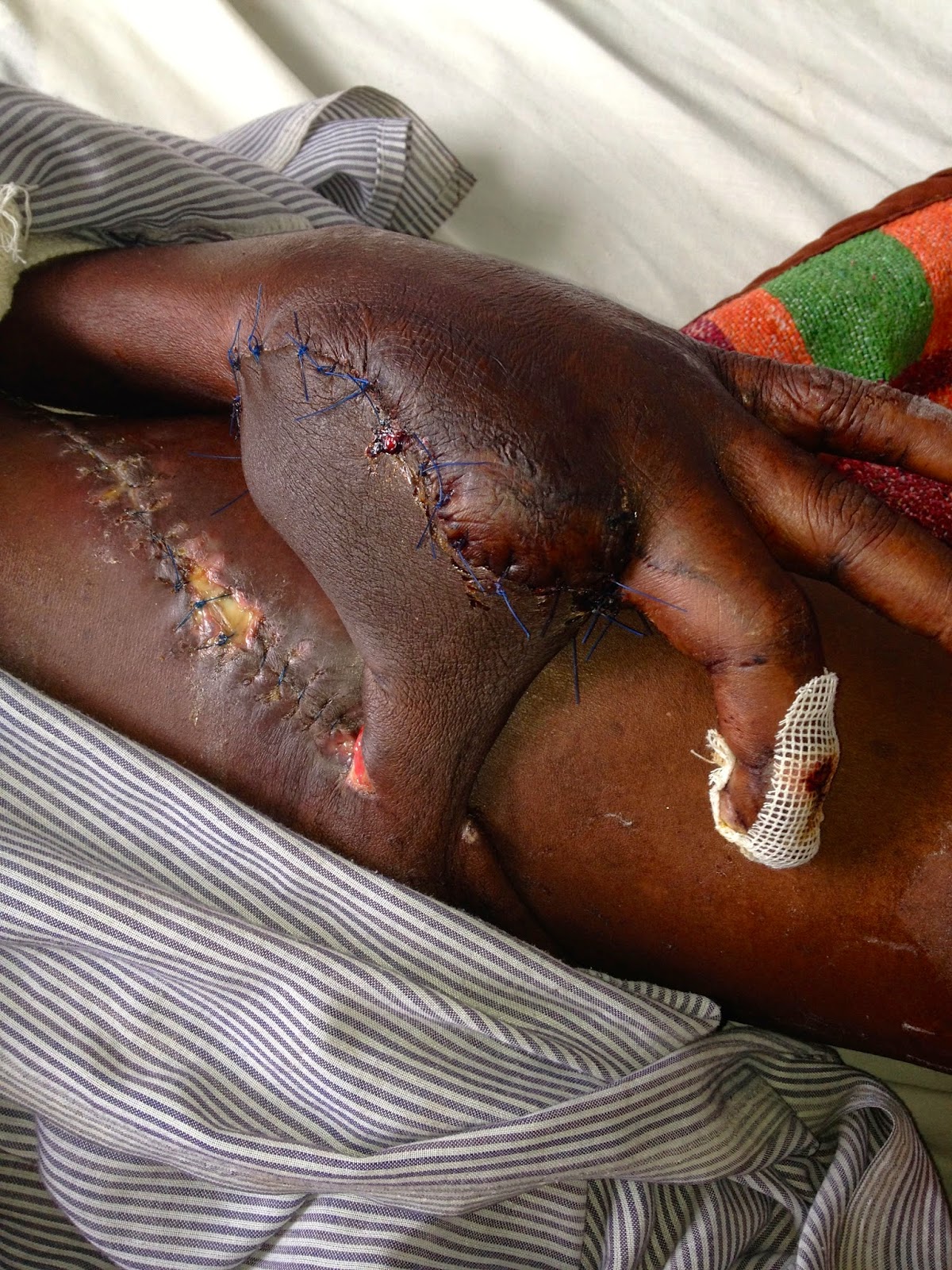 The groin flap, still attached to the pedicle of skin which contains the artery and vein to keep the flap alive while the new blood supply from the hand develops. 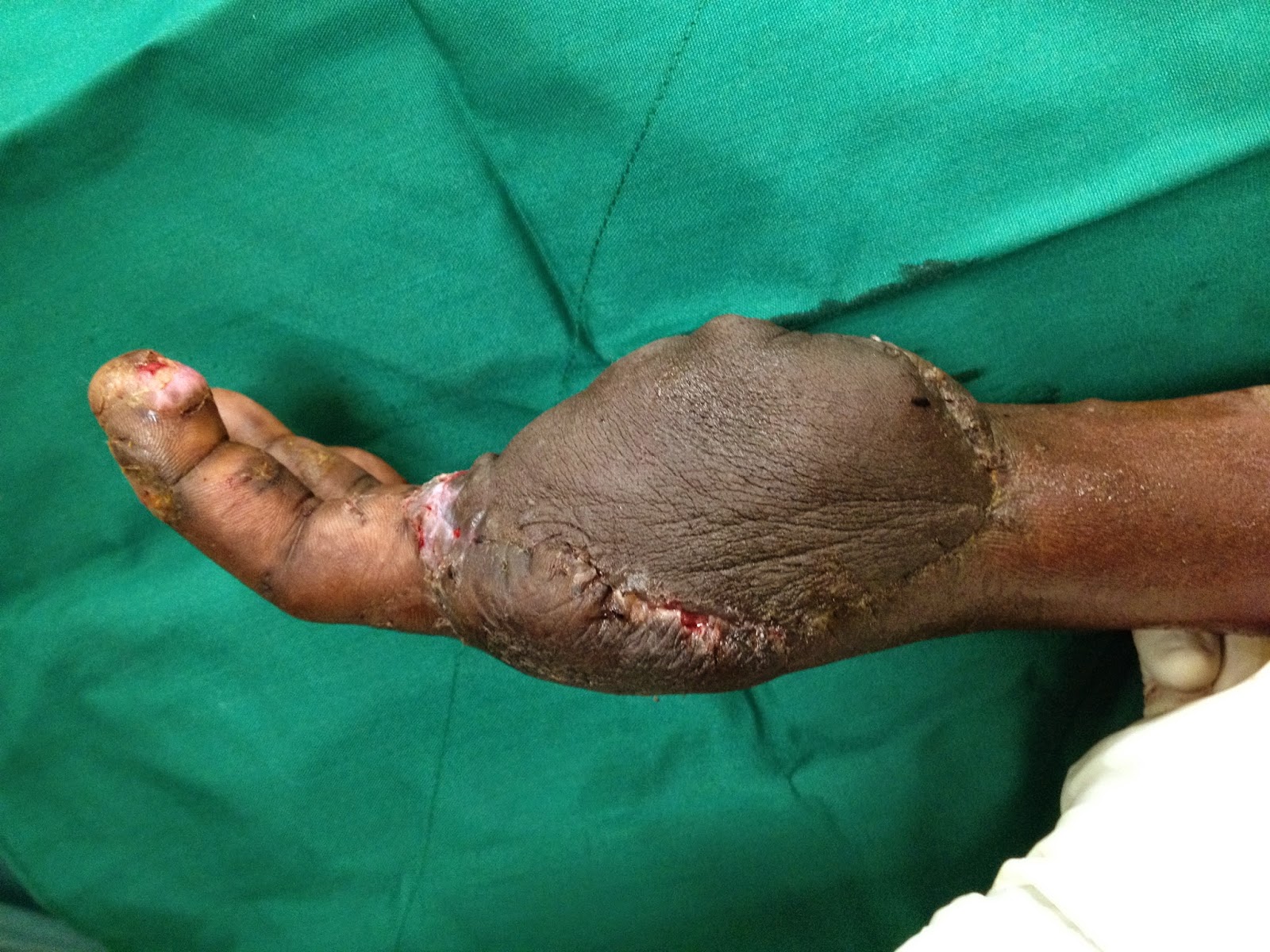 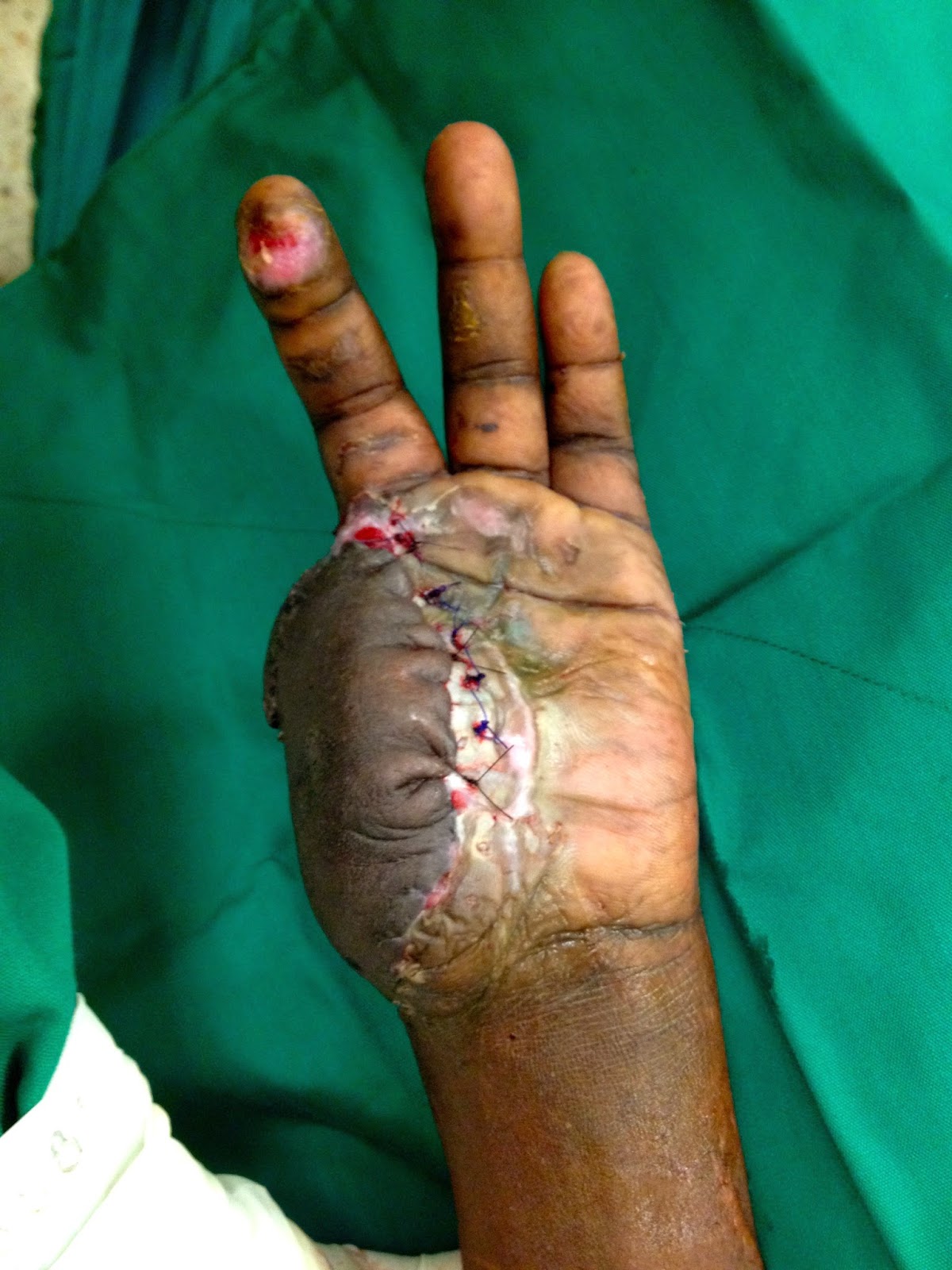 Three weeks later, after division of the pedicle.  The new blood supply comes from the surrounding healthy tissues in the hand. 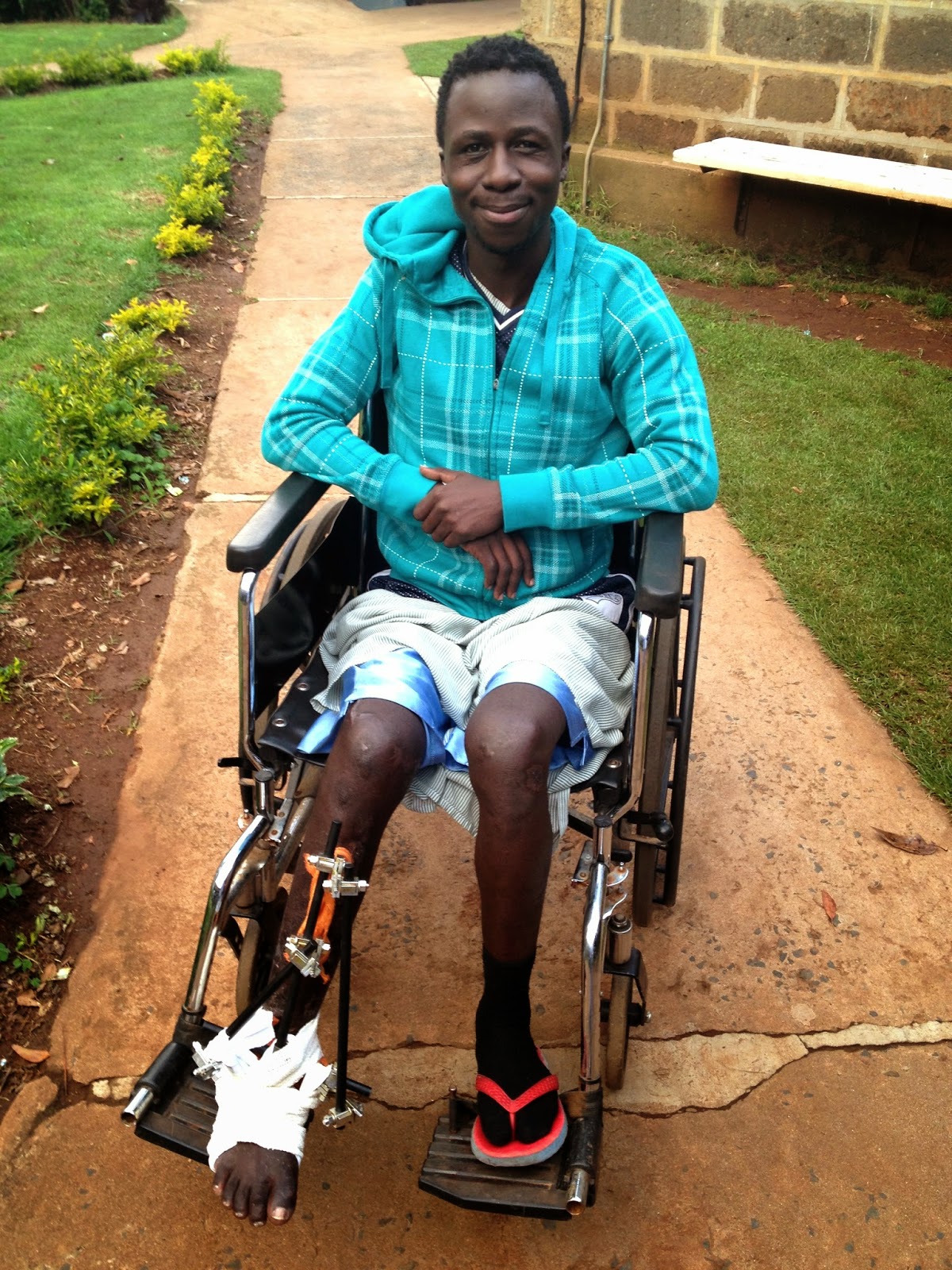 Jack, on the day he believed. 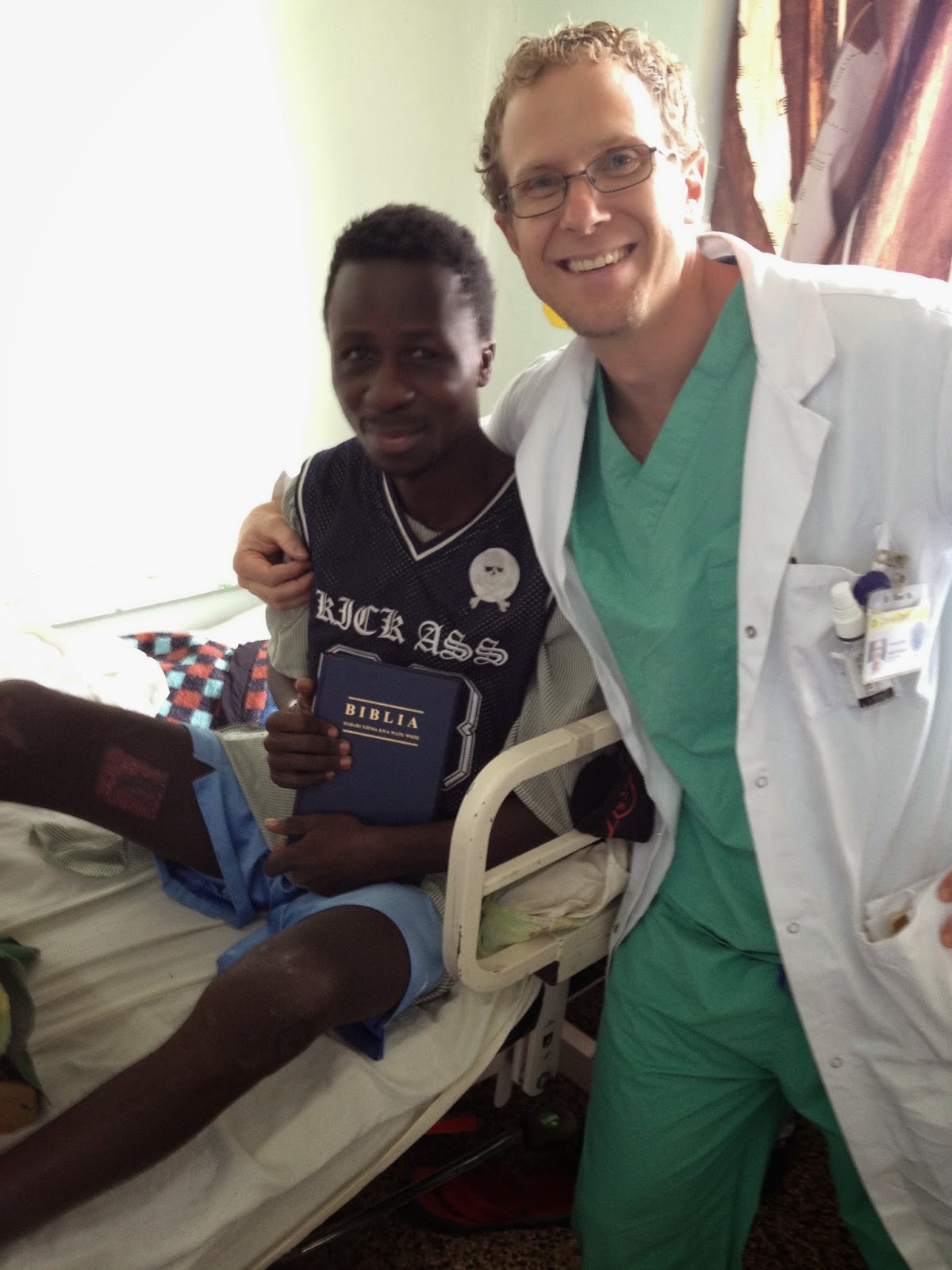 Jack, with his surgeon, new Swahili bible (and "Kick-A" T-shirt)

One of the phrases we use regularly on the orthopaedic service at Tenwek, which seems to perfectly encapsulate the peculiarity of the day-to-day cases we see here, is “You just can’t make this stuff up.”   Last month, a 40 something year old man (who I’ll call George) presented to casualty with half his hand blown off by a stick of dynamite.   Apparently, Jeremiah was correct when he insisted that there is gold in the hills around Western Kenya (at one point when he was younger, he wanted to ship a large sluice so he could pan gold from the Tenwek river).   The patient had lit a fuse (yes, a fuse) on a stick of dynamite and when it didn’t ignite, he went to inspect, and just as he reached out his hand to grab the stick, it exploded and completely blew off his thumb and index finger.

Covering large hand wounds such as this can be challenging.  But one of the described methods in plastic surgery literature is with a “groin flap” in which a full-thickness paddle of skin in the groin region is elevated with its blood supply within a pedicle and then draped over the defect to supply new skin to the region of loss.  The hand needs to remain still for three weeks while a new blood supply “takes” and so to accomplish this, the hand is literally sutured to the groin.  Then, after three weeks, the pedicle is divided and the hand “freed.”

During George’s three week waiting period, a young man named Jack was admitted to the bed next to him with a neglected open, segmental distal tibia fracture from a motorcycle crash.  He was first admitted to another hospital where he literally sat without care for 5 days, until his sponsor (who I providentially met at an Indian wedding last February) insisted that he be taken to Tenwek.   After several operations, including the placement of an external fixator (pins, clamps and bars), Jack was on his way to recovery.

While on morning rounds one day, I asked Jack and George if they were Christians, and Jack very honestly answered ‘no’ but was interested in hearing more.  So, we made plans to meet later that day.  But as the work typically goes, I was completely slammed, and had no time to meet with Jack.  Unfortunately this scenario happened for the next three days, each day on morning rounds telling him I would find him later, and each day, loosing the opportunity because of work.  Finally, one evening I had time to have a cup of chai with Jack in the hospital canteen.  Jack explained to me that he was orphaned at age three when his parents were both killed in a car accident, and he literally lived on the streets from age 3 to age 15.    Then, he was “rescued” by his sponsor, a Hindu woman who helped him through school, and on to his current employment as a DJ.  I explained to Jack that Jesus came for all people, regardless of race, religion, color, background, etc., because we all desperately need a Savior and that through the forgiveness of sin that He offers through His death for us on the cross, we can now have hope.  Right then and there, Jack said he believed, and prayed one of the most honest, cool prayers that I have heard in a long time.

Through the randomness and oddities of the cases we see here, mixed with the busyness of work and life, we see glimmers of God’s grace (which continues to amaze).  Please keep Jack and George (and all our patients) in prayer that God would heal and restore physically and spiritually.  Thanks for all your support and prayers for our family!
Posted by The Galat Family Kenya Update at 12:43 PM

Great story Dan! Hahaha, Jack's t-shirt. ;) I love and miss you all! Ruth