“The Maiming (and Healing) of a Generation” 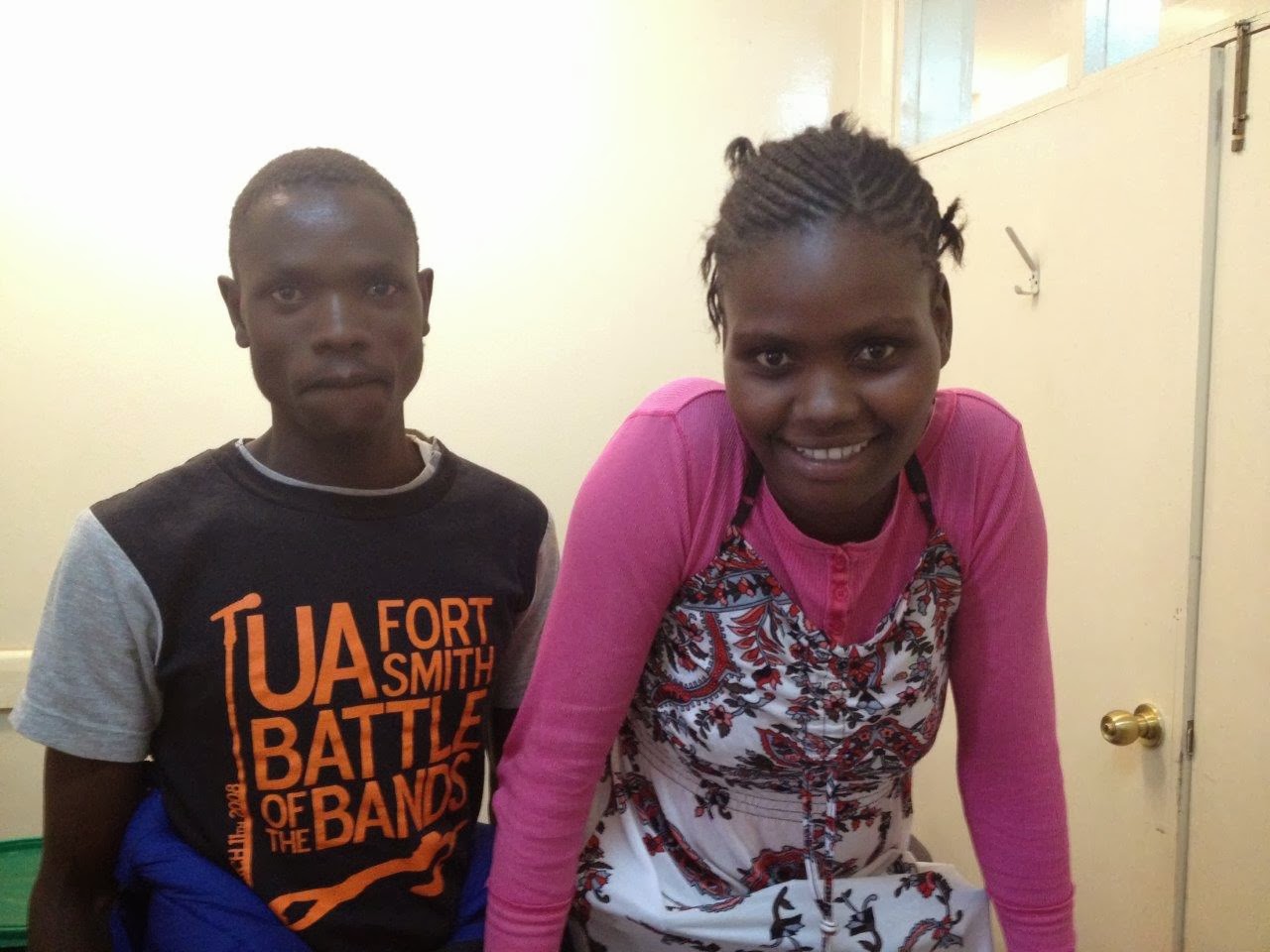 Patient and her husband at first follow-up appointment after discharge from the hospital. 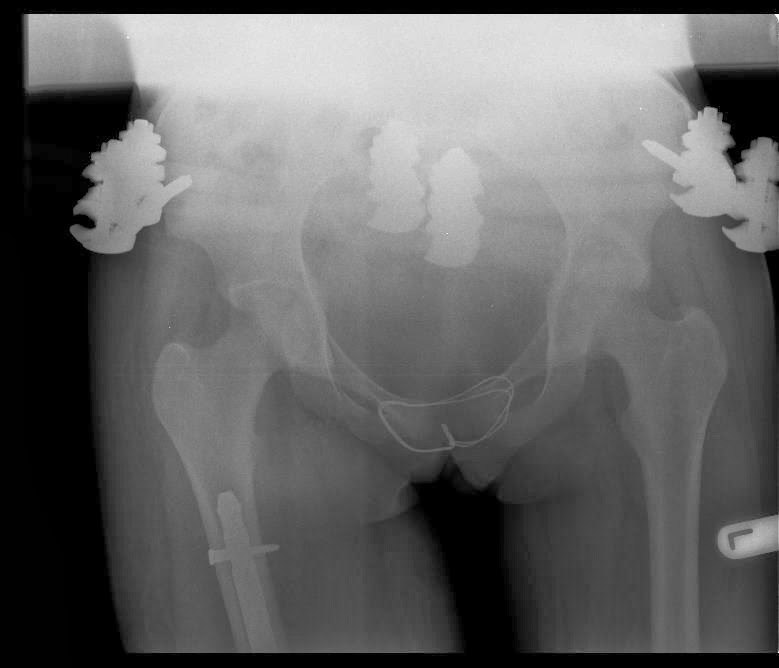 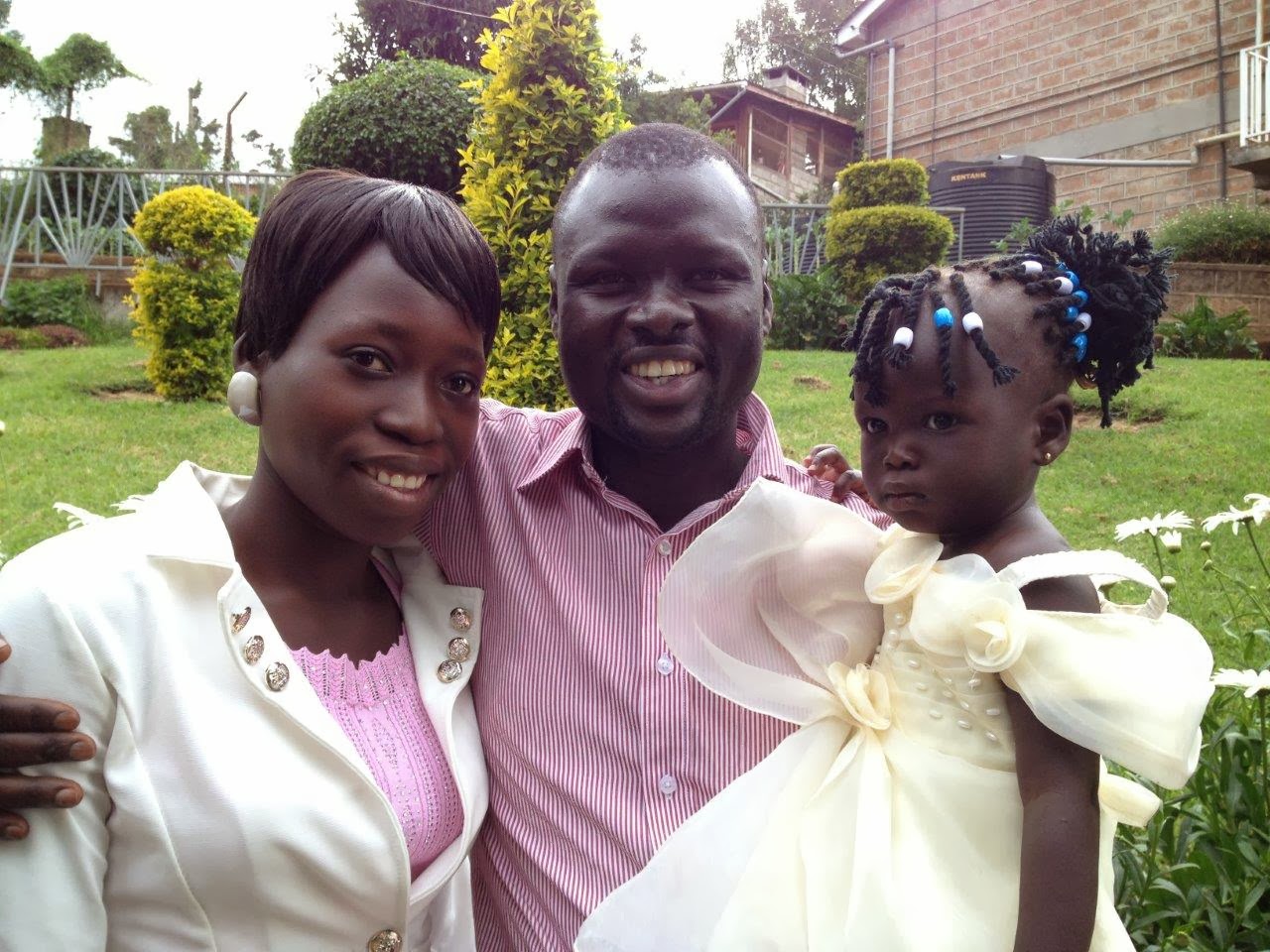 Dr. Fasto Lado, the orthopaedic resident from South Sudan and his wife and daughter, all dressed up for the welcome pig roast. 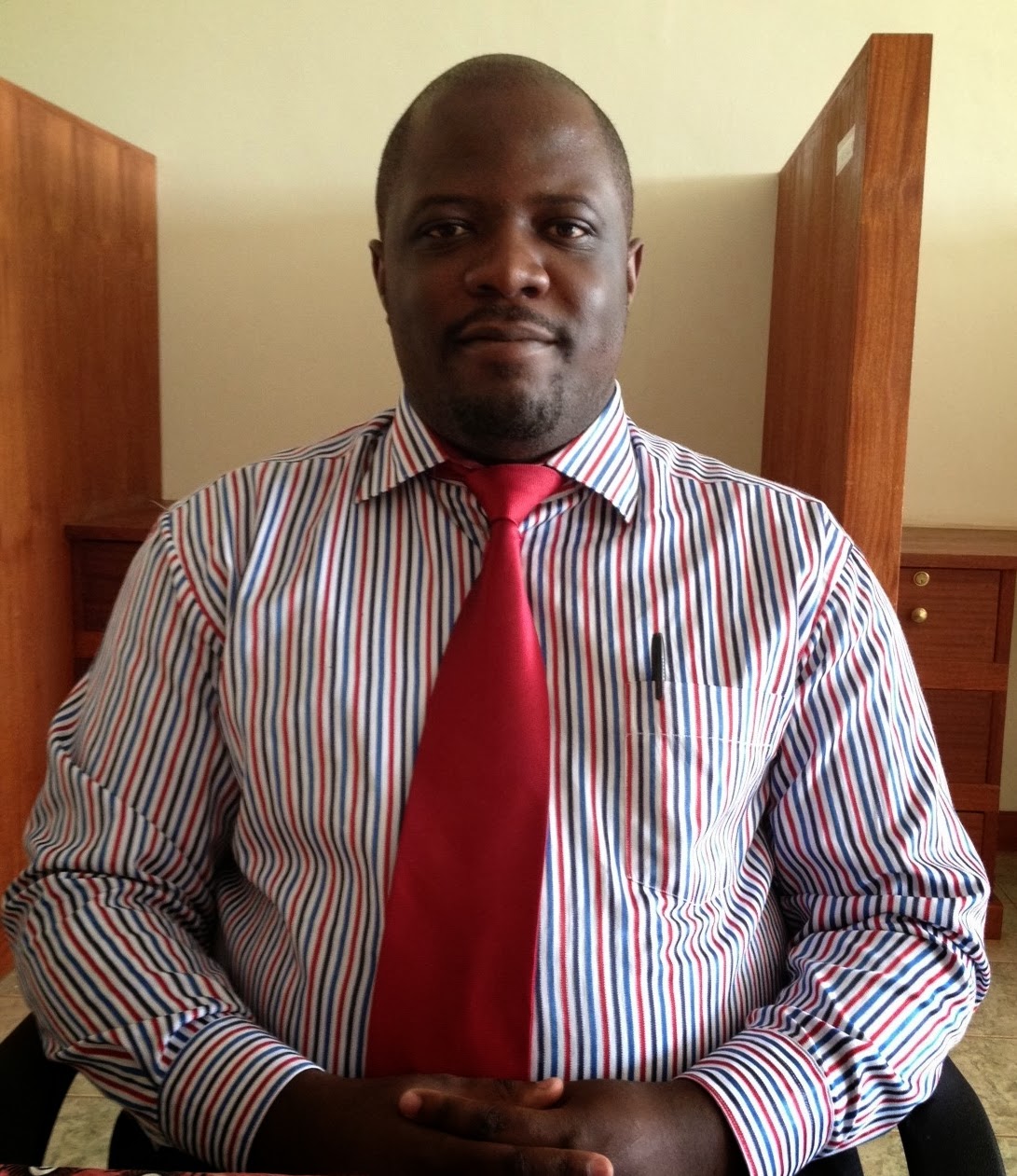 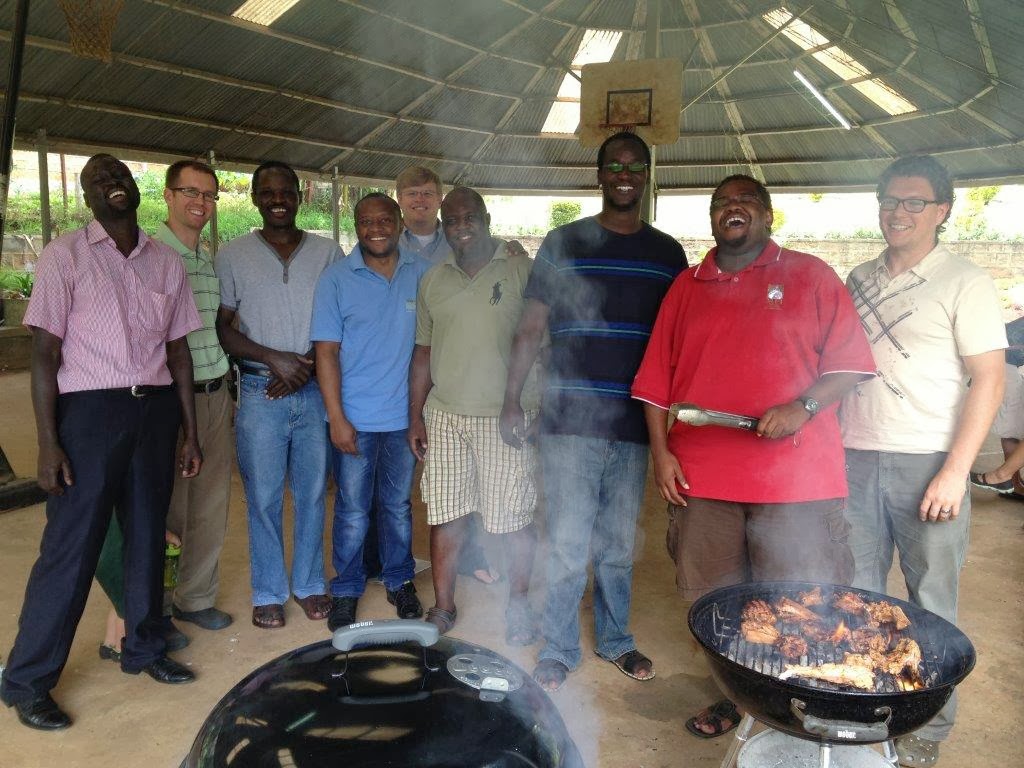 Dr. Seno (general surgery resident in red shirt) donated his annual pig (gift from his father) for the roast.  With Seno and I at the helm, meat will always bring a smile. ﻿ 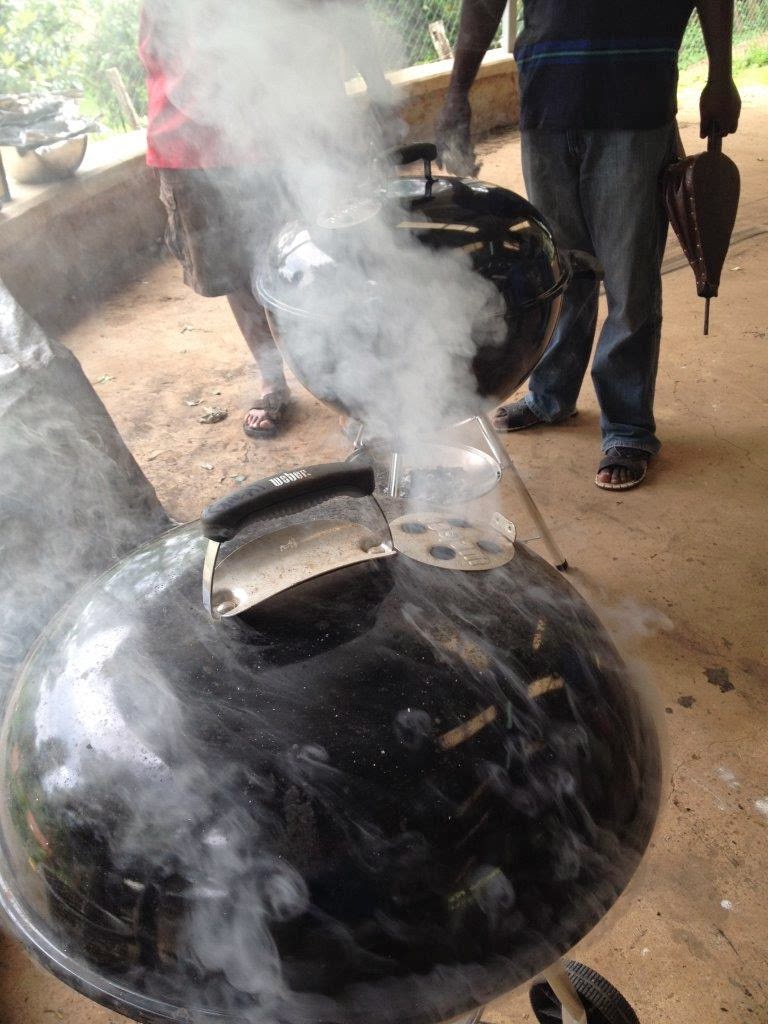 During an especially busy call weekend in December (exacerbated by a two-and-a-half-week doctors' and nurses' strike in Kenya, in which Tenwek was one of the only open hospitals in our heavily populated rural area), my resident called to say that there was a young female in casualty who was hit by a lorry (truck) while walking on the side of the road.  “She has bone protruding from her pelvic region,” a statement which perked my interest, knowing that an “open” pelvic fracture can be a life threatening condition.   As I walked into the bustling casualty overflowing with massive numbers of patients, I was surprised to see her tucked quietly into one of the corner beds away from the main activity .  I lifted the bloody sheet covering the lower half of her body, and was amazed at what I saw (one of many “firsts” I see at Tenwek on a regular basis, or as Will, my partner, frequently says, “you just can’t make this stuff up”).  Apparently, when she was hit by the lorry, her legs completely split apart, and the entire left half of her hemi-pelvis was protruding about 5 inches though her skin, and the surrounding area damaged by multiple lacerations.   The patient was very calm as I explained that we would need to take her to surgery to try to fix her, but in my heart, I fully expected her to die, given the complete severity of her injuries.

We resuscitated her in theatre with several liters of fluids, and then began the arduous process of trying to put her back together.  After thoroughly washing the protruding bone, which was dirty with soil and grass, I wired the two halves of the pelvis together using sternal wire (probably brought by my brother John for open heart surgery).  Then, while Dr. Russ White and the surgical resident worked on reconstructing her soft tissue injuries, I supplemented the internal pelvic fixation with an external fixator, using 5mm diameter pins drilled deep into the iliac crests which were then connected by graphite rods.   Not once during the entire procedure did she show any signs of crashing, and, in the end, we were all pleased with the reconstruction.

At first, during our post-op morning rounds, she would lay stoically while we examined her, likely traumatized by the horrific events in her life.  But over time, as we explained how God was healing her, and had even spared her life, she began to come alive with the most beautiful smile, and we saw her true person: a beautiful woman loved by God!   Amazingly, her postoperative course was entirely uncomplicated, and after about two weeks in the hospital, she was discharged. Just yesterday, I saw her in clinic, accompanied by her husband, actually standing (see pic), with completely healed wounds.  I was overwhelmed with a sense of God’s grace and presence as we prayed, thanking Him for His healing in her life.

The World Health Organization has recognized that road traffic accidents are becoming a public health crisis, on par with HIV and tuberculosis, and has declared this “the decade of road safety.”  As roads improve, and access to transportation increases (especially in our area via motorcycle taxis), the increase in injuries related to road traffic accidents is staggering.  The orthopaedic service has grown exponentially, and is now one of the busiest at Tenwek, with currently more than 55 inpatients.   And these patients' injuries are not simple, but complex, often with multiple open fractures, and challenging wounds that require multiple trips to the operating room.  I have come to call this epidemic “the maiming of a generation.”  But God has put Tenwek in this small part of the world (which also feels like the epicenter of this crisis) to stand as a testimony that Jesus loves His people, and that He has come to heal that which is broken, both body and soul.

Part of this holistic vision at Tenwek is the training of African surgeons.  The new orthopaedic residents are here and integrating well into our community (see pics of the annual pig roast) and plans for our sorely needed trainee housing complex are progressing.  About $340,000 of the needed $800,000 has been raised, and we are still trusting God to complete this project in time for the next class of residents (January 2015).  Would you consider partnering with us in what God is accomplishing here at Tenwek?  You can click the following links for secure on-line giving: Tenwek Orthopaedic Residency Fund and/or the Tenwek Trainee Housing Project.
Thanks for all your continued support of our family and the work at Tenwek!

Posted by The Galat Family Kenya Update at 12:42 PM

I'm so happy I discovered this blog. It's my dream since I was a child to become a missionary surgeon in Africa. If it's God's will that I'll come for a few weeks to volunteer there in the summer vacation( next year) and later to be a resident in Africa. I wish I could do something but I can't do anything fot you except for praying. God bless you, your family and the ministry there.