Emmanuel – God with us 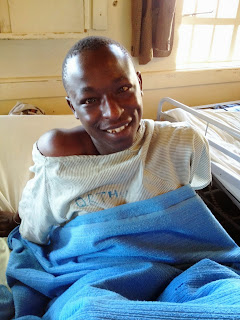 Emmanuel, a 19 years young man, with a painful mass on the back of his leg. 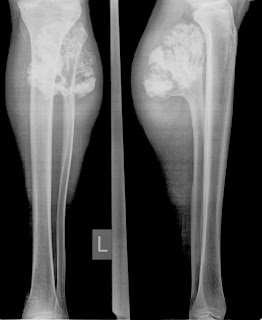 X-ray showing this large osteochondroma growing off the top of his fibula, essentially filling the back 1/2 of his calf. 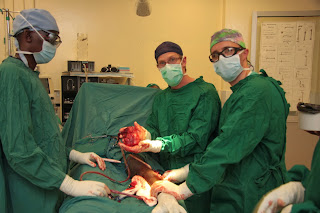 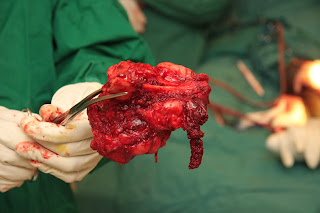 Emmanuel was shocked (as were we) at the size of this mass which he lived with, in pain, for several years. 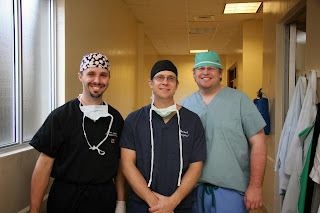 Other evidences of "God with us."  Dr. Dylan Nugent (left), who will join the ortho team (God-willing) in 2015 after he finishes residency, and Dr. Will Moore (right) who joined us 2 months ago, a stellar surgeon, team-member and friend.  (Dr. Kiprono - absent as he was on well-deserved leave after several months of faithful service - often alone - while I was away.) 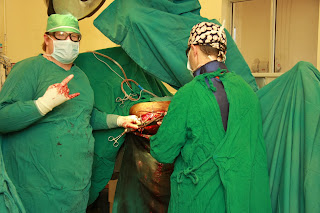 Will showing "the love" during a femoral nailing.  He loves the big and bloody ortho procedures! 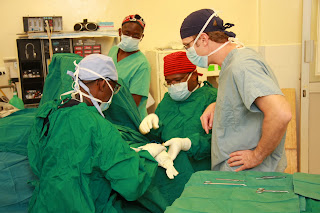 "God with us," as we continue to teach and train orthopaedic and surgical residents. 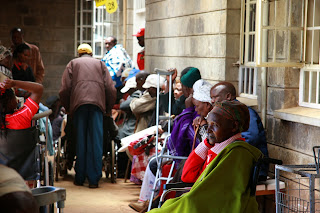 "God with us," as we continue to care for the myriad of patients who come to Tenwek for orthopaedic care - last week in Wednesday clinic, 137 patients...a new record. 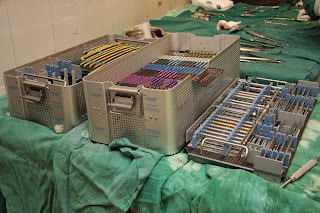 "God with us," as our inventory grows.  The inaugural use of our new Biomet distal femoral locking plates. Huge... 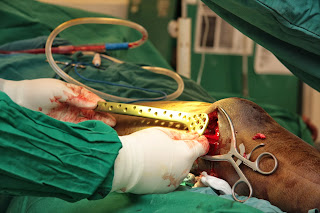 Dr. Will, choosing the right plate for the job. 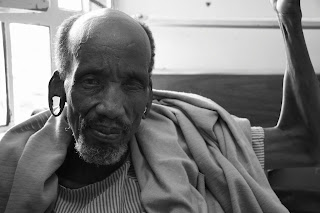 "God with us," as we continue to share the good news of Jesus Christ with our patients.

Two days ago, I met (for the first time) a young man named Emmanuel who had a huge, firm mass growing in the back of his leg.  A previous biopsy had confirmed the mass was benign, a large tumor called an osteochondroma, which was growing off the top of his fibula bone.  All that needed to be done now was to “simply” remove this mass, which had grown to the size of a grapefruit (was now enveloping all the major nerves and vessels of his leg), and he would be “cured” of the years of pain associated with it.


Assisted by Dr. Dylan Nugent, a visiting 4th year resident from the U.S. with a particular interest in orthopedic oncology, we proceeded, first isolating and protecting the peroneal nerve, then trying to shell out the tumor from the surrounding normal tissue, which proved to be anything but “simple,” as the tumor had grown to the opposite side of the leg, directly behind the tibia, where it was pressing directly into the large vessels that feed the leg and foot.  Our fear was that, in removing the tumor, damage would be done to these delicate structures.


After removing the tumor and releasing the tourniquet (which allows a relatively blood-less surgical field), we encountered significant bleeding, although not pulsatile (i.e. from an artery), but rather a dark, steady flow (i.e. from a vein).   A small hemostat was used to (somewhat) blindly clamp the torn, bleeding vessel.  After tying off this small vessel with suture, the bleeding stopped, but we noticed the tissue surrounding was thumping at the same cadence of his heartbeat.  The vein we had clamped and tied (a branch of the major vein of the leg) was only a few millimeters from the tibial artery, which was completely intact, without any sign of injury, our hands sovereignly guided by a God who cares deeply for our patients at Tenwek.


After showing Emmanuel the mass (he was completely awake, anesthetized by a spinal), and enjoying his wide-eyed shock at the size of his tumor, I asked him, “Emmanuel, do you know what your name means?”  He responded with an eager smile which belied a deep inner faith.   “Yes,” he said, “it means ‘God with us.’”   Sensing God’s presence throughout the entire procedure, and amazed and humbled by the fact that we serve a God who shows up in times of our desperate need, I said “God was with us today, Emmanuel…He was with us today.”


Since returning to Kenya almost a month ago, life at the Galat house, and in the hospital, has been absolutely crazy.  Between unpacking, settling, changing diapers, organizing the orthopedic storeroom, entertaining guests, preaching, operating, homeschooling, cooking, etc. our lives could probably be described as chaotic, at best, out of control, at worst.   Our days are such a paradoxical mixture of highs and lows, struggle and victory, and good and bad feelings at all the difficulties and challenges we face (“normal” for missionary families, according to Mission Training International).  Yet God’s grace and faithfulness continues to overwhelm us on multiple levels, and more than ever, we are comforted by the fact that we serve a Savior whose name is Emmanuel – God with us.


Thanks for all your love and support of our family!
Posted by The Galat Family Kenya Update at 3:47 AM

In 25 years in orthopedics as a physicians assistant I have seen three of these as I recall. This one TAKES THE CAKE!!! From the location I know you were treading on very thin ice... EMMANUEL INDEED!!!
Thank You LORD for guiding my brothers' hands and eyes.
In Christ,
Dennis McCutcheon

Enjoy your post. I like the "Department of Orthopaedic" logo!
It is good to see Dr. Moore there with you all, we send him greetings from Tennessee. Hope we can see you all next year sometime.