Even in the worst circumstances... 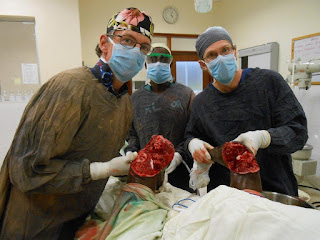 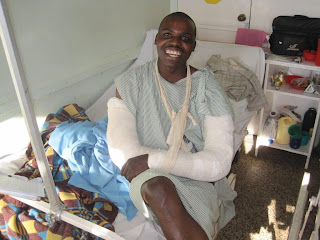 Two weekends ago, I received a call from Seno, the surgical resident on call, who explained that he had admitted a patient with bilateral panga (machete) wounds to both arms.  “It was pretty bad when we washed them in theatre, almost completely amputated on both sides,” he said with less jocularity than is usual for Seno.  Panga wounds from domestic conflicts are, unfortunately, all too common in this part of Kenya, where firearms are illegal, and sharp instruments are usually the weapons of choice.  “We will take him back to theatre on Monday for a second look,” I said.


When patients are attacked with a panga, they usually have tell-tale “defensive” wounds; i.e. cuts on the forearms and hands when the upper extremities are instinctively used to protect the more “necessary” parts of the body, such as the face and chest.   However, when we examined the patient in theatre, I noticed that his wounds were not the characteristic defensive wounds we normally see, but rather higher up at the elbow, entirely identical on both sides, and with multiple skin cuts at the same location.  As the wounds were opened again, Seno’s initial assessment was corroborated.  Indeed, both arms were nearly amputated, but thankfully with the brachial artery and median nerve to both arms spared, which would mean some function if we were able to save the arms from infection or other complications.  As I contemplated the nature of these wounds, trying to think like a medical forensic scientist, I said to the team, “These wounds look more deliberate than normal…let’s investigate further tomorrow during rounds.”


The next day, I had a meeting to attend, so Dr. Rowe performed morning rounds, and when I reconnected later with him and the team, Glen relayed the patient’s horrific story that he had discovered that morning.  Apparently, the patient was captured by some assailants (the details of course, obscured, as usual), tied at the wrists, and with arms outstretched, had both elbows hacked with a panga, one at a time, in the attempt to cut off  both arms.  “I wonder what he did?” I said out loud as I tried to keep from imagining the sickening events of this scene.


I noticed that Glen was telling the story with slightly more excitement than I would have expected.  He went on to explain that after the team listened to this patient’s story, he shared with the young man about Jesus, who loved him despite anything he had done or any events that had happened to him.  “The patient gave his life to Christ right then and there,” Glen said with the passion that I so appreciate in him.   The next morning, the patient’s transformation was completely evident, as he was no longer quiet and stoic, but rather smiling, talking with other patients, and exhibiting joy that no solitary human could muster with a story such as his.


The daily work at Tenwek carries with it a frequent absurdity as we encounter patients with unbelievable stories such as this young man’s.  Just a few days ago, I amputated the arm of an 8 year old boy whose wrist was wrapped so tightly with leather (by a local “bone setter”) that the entire arm became gangrenous.  Yesterday, while in casualty evaluating a patient, the nurses hurriedly rushed a young girl of about 12 on a stretcher into the room for evaluation.  She was covered with dirt, apparently buried alive, and now cold and lifeless.  She was the age of my own daughters.  Another man beat his wife to death before catching himself on fire with diesel fuel.  To be honest, the mixture of emotions that I feel – anger, hopelessness, disbelief, numbness, etc. – when I encounter patients such as these threatens to discourage and/or cause my heart to harden.  But then, God reminds me that even though circumstances may seem senseless, He is in control, blameless, and so able to work all things together for good.  After all, His ways are above our ways, and His thoughts above our thoughts.  So we continue to serve, believing (often despite our feelings) that God is at work all around us here at Tenwek, even in the midst of the worst of circumstances, and that Jesus is the answer to what our hearts truly long for… hope, healing, and forgiveness.


Thank you for your ongoing support of our family…your prayers truly sustain us in our daily work at Tenwek!

Posted by The Galat Family Kenya Update at 5:44 AM

Machetes are so necessary as a tool but are base brutality when used as a weapon. Dealing with aftermath of an earthquake here in Guatemala. LORD give us the provision and strength to do the work You have designed for us and LORD find us faithful in each moment. We get tired, we drop our guard, without You in control we fail. Use us supernaturally in these final days before Your Son's Return, in Jesus Name Amen and amen.