A New Leg for Washington 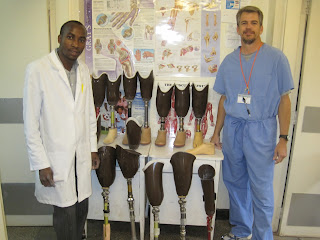 Nick, our Kenyan prosthetist, and Allen Dolberry worked together to build 15 prosthetic legs during Allen's 4th visit to Tenwek. 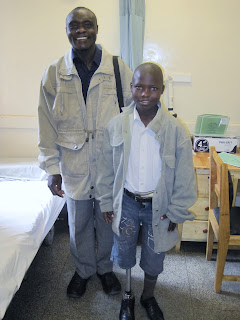 Washington (with his father) testing out his leg for the first time...although somewhat unsure at first, with a little practice, and with the quality construction of this leg, he should do very well.  Thanks Children’s Health Care of Atlanta. 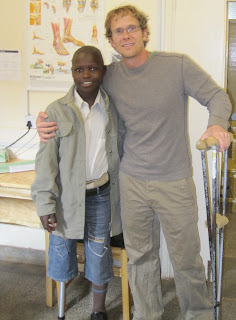 Washington's dad told me he (Washington) considers me his "mzungu" dad (mzungu being a Kiswahili term for "white")!

Last year, a young boy named Washington suffered a tragic injury which eventually required an above the knee amputation (see previous story entitled “A Father’s Heart”).  After Dr. Tim Oswald (a pediatric orthopedic surgeon who served at Tenwek in 2009 as a short term missionary) read the story, he engaged a colleague at Children’s Health Care of Atlanta, who volunteered to fashion a new prosthetic leg for Washington.  Solomon, our head physiotherapist and Nick, our new Kenyan prosthetist made a plaster mold of the stump, which was then sent to Atlanta via a returning visitor to the States.
The leg was completed and sent with another visitor back to Tenwek last month.  However, the leg was received by some unknown person, and (un)fortunately placed in a very safe, but very obscure closet in the back of the orthopedic ward, perfectly hidden from anyone who would ever want to find it.  God works all things together for good, however, because Allen Dolberry, a prosthetist from Phoenix, was at Tenwek for his 4th visit, and Washington was scheduled for an appointment to see him.  We confirmed that the leg had indeed been brought to Tenwek, and a short search located the prize.


Washington now has his new leg, thanks to many people all working together to make it happen. Tenwek is one of the few (if not, the only) mission hospital(s) in Africa with a functioning prosthetics and orthotics department.  Allen and his family plan to return to Tenwek for an entire year in 2014 to complete the development of the program with the goal of making it entirely self-sustaining, so that patients like Washington can continue to find hope that ultimately comes through knowing Jesus Christ!
Thanks for your continued prayers and support for our family and the work being done at Tenwek!
"Therefore, strengthen your feeble arms and weak knees. "Make level paths for your feet," so that the lame may not be disabled, but rather healed."
Heb. 12:12-13


Posted by The Galat Family Kenya Update at 4:24 AM