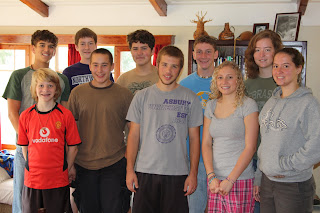 The RVA Crew from Tenwek. Only one student is missing, Brendon Steury. 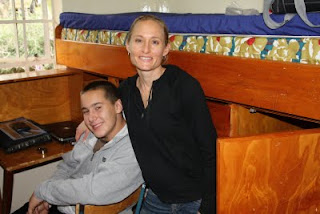 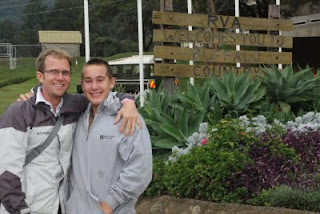 I will miss regularly interacting with Jeremiah (and wrestling...although less frequently now that he is so big...i.e. more at risk for injury).


As missionaries living and working overseas, “goodbyes” are common, but nonetheless painful, especially when involving those closest to us, and even more so when these goodbyes are unexpected. Jeremiah, our oldest, now a strapping 185lb, 14 year-old freshman in high school, was accepted in April 2011 to the Rift Valley Academy (RVA), a well-known and highly academic mission boarding school about an hour outside of Nairobi on the edge of an escarpment overlooking the Great Rift Valley. About 500 students, K-12, attend this school (which began in 1906), most of which are missionary kids from all over Africa.

The wait list to get accepted to RVA can sometimes be several years long, so when Jeremiah was accepted in April, we were quite surprised. After much discussion and prayer, and with the good advice from many that we should leave the final decision to him, Jeremiah chose, back in April, to defer his acceptance and return to the wait list for the following year. However, when we arrived in Kenya two weeks ago, and after seeing all his friends from Tenwek preparing to go to RVA, Jeremiah began to regret his decision. He came to me and said “Dad, can you call RVA and ask them if that position they offered me is still available.” Knowing the chance of there being an open spot one week from the start of school was next to nil, and wanting to help put the issue to rest for Jeremiah, I said, “Sure, but I don’t think the possibility is good.”

The following day, I emailed the admissions director, just after Heather and I read the devotional in “Jesus Calling” entitled “Entrust your loved ones to me.” We prayed and asked God to open the door if this was His will for Jeremiah’s life. After several hours, and no return email, I decided to call (as Jeremiah originally requested). I reached the assistant principle, and after explaining our situation, and that I knew the request was a longshot, he said, “Let me ask the admissions director…she is sitting right here at my desk!” I could hear her in the background saying “Is that Dr. Galat, Jeremiah’s dad? I was just going to email him to let him know that we have a spot for Jeremiah if he wants it!” This time, we were shocked.

Long story short, we just finished New Parent Orientation with Jeremiah yesterday, and said our unexpected, but peace-filled goodbyes. He is now "on his own" (that is, out of our hands and in God's). It was a hard day for both him and us. But, as is so often the case in our lives, when God works at the last minute and in such a miraculous way, we can be completely confident that He is the one who has done this work. We know we can entrust our son to God, the One who loves Jeremiah (and all our children), far more perfectly than we ever can. Please pray for Jeremiah, that he would adjust well to this new change (yet again), that he would make some really close, solid friends, that he would do well in high school (taking some tough courses), and finally, that he would get fully prepared for rugby season, which starts next spring!

Thank you so much for all your prayers and support!

Posted by The Galat Family Kenya Update at 10:17 PM

Will be praying for all of you. It sure does sound like God had thisl planned!

What beautiful confirmation of God's plan for Jeremiah this fall! I'm praying right now for all of your hearts as you adjust to this change in plans.

I love your blog and I read it faithfully, even though I don't leave a comment often. This post was especially meaningful to me. I seem to be constantly putting my children in God's hands, which means somewhere along the way I must be yanking them back. I am so thankful and praise God that Jeremiah has this option. A blessing, for sure. Thanks for the inspiration today. ~ Brin

We have several friends (other missionaries in Africa) that have children attending Rift as well. Have heard plenty of great things about it. Praying Jeremiah adjusts well and connects with God in a fresh way through this experience. Also praying for you all, the family at home, since we know it is not easy.

Hey Galat Family-I am Melissa Philip's aunt-the one that was at RVA for 10 years! I was also Jason Faders 6th grade teacher at RVA a million years ago! Would love to get your email address and "chat" with you. (skfasse@gmail.com) ps: Philips will be with us this next week for a few days. Can't wait!