How a C-ARM Can Bring Glory to God: Ann's Story 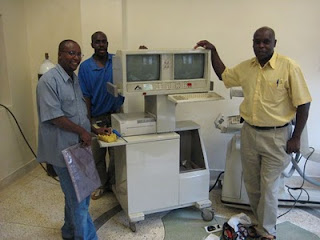 Mr. Rugut and the team after installing the new boards. Note the smile on Rugut's face. 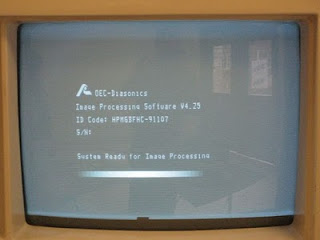 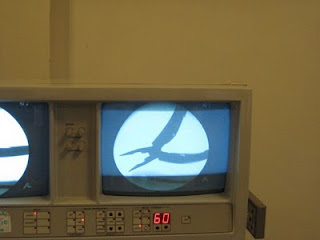 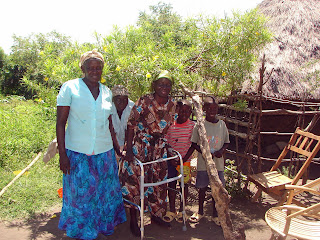 Ann is one of many patients who benefitted by the use of C-ARM during her surgery (which occurred prior to our C-ARM malfunction saga). She is now back home with friends and family, and able to stand and walk after more than 5 months of laying in bed with two broken legs.

The two circuit boards made their way from Chicago to Phoenix to North Carolina to Amsterdam to Nairobi and finally to Tenwek, but not without significant effort and ordeal (yet all infused with the grace and sovereignty of God) by the family who carried them, our friends, the Camerons. For the amazing story of the events of their journey, check out their blog, and please keep Scott in your prayers as he has surgery at Tenwek on Monday.

Mr. Rugut and his qualified team of Kenyan technicians received the boards just yesterday, and after installing them found that the problem has been fixed! Thanks to God, our C-ARM is now fully functional again…and I received report that within 20 minutes of the repair’s completion, the C-ARM was used to help fix the multiple fractures of a young girl who fell out of a tree. Dr. Daniel Matthews, the visiting orthopedic surgeon currently covering at Tenwek, emailed saying how thankful he is to have the C-ARM up and running…he also asked for prayers in managing the thirteen patients in the queue awaiting surgery!

When we ask and trust God for something that seems impossible, He often goes way beyond, far above what “we can even ask or imagine” so that all we can do is simply say, “God did that.” A mere week after sending out a plea for funds for a second C-ARM, and for the intern/resident housing project, the full amount for both projects has been pledged! The company in Chicago that provided the replacement circuit boards (incidentally, also as a donation) will also be providing us with a newly refurbished replacement C-ARM, identical to our current unit, so that, God willing, in the future, we will not be without fluoroscopy for an extended period of time again. The new unit should be ready for shipment in about 3 weeks.

THE STORY OF ANN

“Ann,” a 40 something year old lady who was tragically involved in a car accident in December of 2009, and fractured BOTH femurs (thigh bones), the right side in the middle, and the left side near the hip. Because (a) she is HIV positive, a widow to a husband who died from the same disease, and (b) utterly destitute as a result, thus unable to afford the implants needed to fix both fractures, she laid in a government hospital for 5 months, no treatment, wasting away, losing strength and all hope.

Resigning to the fact that she would never be able to walk again, she was discharged to her small home near Lake Victoria. A missionary in the area learned of her plight, and brought her, like the Good Samaritan, to Tenwek, agreeing to pay all medical bills associated with her care. When I first met Ann, I felt a mixture of sorrow, compassion, anger (because of her blatant medical mismanagement) and dismay. Had her fractures been “fresh,” (i.e. not more than a few weeks old), fixing them would have been relatively easy. But instead, with two non-healed and chronic fractures, both legs shortened more than 5cm, and with knees that were frozen because of non-use, the surgeries would be much more difficult. Before starting every case at Tenwek, a prayer is said for the patient…the day of Ann’s surgery, our prayers were charged with an extra sense of dependence on God to provide wisdom, grace, strength and healing. Aided by a “then-functioning” C-ARM (her surgery thankfully occured right before our C-ARM broke), we placed a rod in the right femur, a plate on the left, and manipulated both knees to break up the scar tissue that had formed from months of inactivity. After three weeks of intense physiotherapy (the patient being very unhappy with her doctor who insisted she continue to bend her knees daily), she WALKED out of the hospital (with the help of a walker), praising God!

Ann is just one of hundreds of patients who have been blessed by the generosity of the hundreds of people like you, who serve “behind the scenes” by giving, praying, as well as advocating and championing. Without our donated (current, and soon-arriving) C-ARMs, surgeries like hers would be, in the least, far more difficult, if not impossible. Without the donated implants, patients like her would still be laying in bed, unable to walk, or worse. And without housing for the interns and residents (i.e. extra manpower) there would be no way to take on “elective” patients like Ann. All these blessings work together for our patients so that they can glorify God, by saying, “Jesus healed me!” Thank you again for your continuing prayers and support!
Posted by The Galat Family Kenya Update at 2:47 PM

Truely our Lord God is Jehovah Jireh. We all rejoice here at Tenwek because we have a working C-Arm! I am delighted to learn that another one is on the way coming. Thank you daktari and your family and all that made all these to happen. God shall surely bless you in abundance!

We have enjoyed following your blog this past year. The kids are growing up. May God guide you very specifically as you are in the states this year with lots to do. Malin and family just arrived in Washington yesterday for our family vacation.
Warmly,
Madelle Friess

Welcome to New world finance limited, we appreciate the good comments that have been circulating on the Internet about our good works and we thank all those who have taken a loan from our company because we are certified, trustworthy, reliable, efficient, fast, dynamic. And also cooperate with our customers. Now let's go back to what we do best. Do you need an urgent loan? A loan to probably expand or start your own business? or you need a loan for education or to pay off your debt, with an interest rate as low as 3% that suits any client and you will enjoy our services. Contact us now by email: Newworldfinance.ltd@gmail.com

Are you a business man or woman? Do you need funds to start up your own business? Do you need a loan to settle your debt or pay off your bills or start a nice business? Do you need funds to finance your project? We Offer guaranteed loan services of any amount and to any part of the world for (Individuals, Companies, Realtor and Corporate Bodies) at our superb interest rate of 3%. For application and more information send replies to the following E-mail address: standardonlineinvestment@gmail.com
Thanks and look forward to your prompt reply.
Regards,
Mr. Hameed Youssef
Marketing Manager
Standard Online Finance Ltd.

We provide BG, SBLC,and lots more for clients all over the world.

We are equally ready to work with Brokers and financial
consultants/consulting firms in their respective countries.

Assalamu'alaikum
Are you in need of Urgent Loan Here no collateral required all problem regarding Loan is solve between a short period of time and duration more than 20 years what are you waiting for apply now and solve your problem or start a business with Loan paying of various bills I think you have come to the right place just 2% interest rate. Contact Us Via.email: abdullahibrahimlender@gmail.com
whatspp Number +918929490461
Mr Abdullah Ibrahim

HOW I GO MY DESIRED XMAS LOAN AMOUNT $520,000.00 FROM A RELIABLE AND TRUSTED LOAN COMPANY LAST WEEK. Email for immediate response: drbenjaminfinance@gmail.com

Hello everyone, Am here to testify of how i got my loan from BENJAMIN LOAN FINANCE(drbenjaminfinance@gmail.com) I don't know if you are in need of an urgent loan to pay bills, start business or build a house, they offer all kinds of loan. So feel free to contact Dr.Benjamin Scarlet Owen he holds all of the information about how to obtain money quickly and painlessly via Email: drbenjaminfinance@gmail.com

and consider all your financial problems tackled and solved. Share this to help a soul right now, Thanks