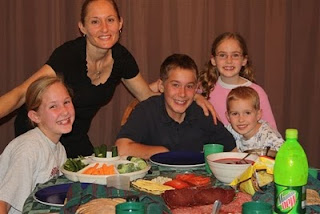 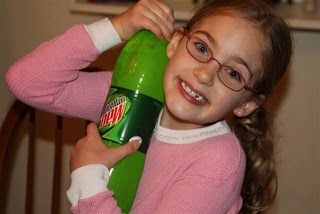 The result of deprivation: over-exuberance for mundane, hard to obtain items. 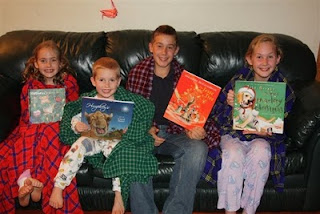 Yearly tradition in our house: Christmas books for the kids. This year, they each got a Masai blanket to keep warm while opening presents. 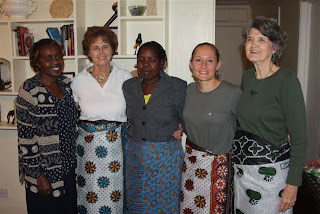 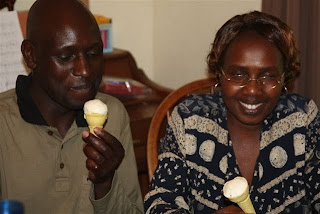 Meshack and Ruth enjoying something new on Boxing Day.

The Wednesday before Christmas was a clinic day, but because of the huge number of admissions, and patients in the queue awaiting surgery, we, being orthopedically blessed with greater numbers at the moment, exercised the divide-and-conquer strategy, thinking that we could win the battle and catch up in time for a quiet Christmas day at Tenwek. Dr. Gaw, and the Kenyan surgical resident and intern hit the battle front head-on in clinic and saw about 80 patients, while Drs. Greene, Kiprono and I flanked the enemy in theater, getting 7 surgical cases done. As Dr. Kiprono and I were leaving around 6pm, satisfied with the day’s work (although with a sore ring finger), a nurse from Casualty ran into theater asking rather excitedly, “Are there any C-collars here?” Kiprono and I looked at each other thinking, “This cannot be good.”

We walked over to Casualty to find it flooded with patients, and the courtyard crowded with a myriad of anxious relatives and onlookers. “What happened?” I asked one of the Kenyan residents. “A mini-matatu (small van holding a maximum of 5 people) was carrying 14 passengers, and while going down a hill, the brakes went out,” he said. I looked over at one older man struggling to breathe, with his chest wall visibly moving out of sync with his breathing, a flail chest. The lady next to him had a deformed forearm and an obviously dislocated left hip, which Kiprono and I quickly reduced. Across the room was an elderly woman with a swollen distal thigh and a small wound over her knee with visible bone peering through. Her breathing was labored. As we went from patient to patient, I felt my anger at this seemingly senseless situation flaring. “Where are the police?” I said out loud, as if I was the only one original enough to pose this grand question that everyone was already wondering. “Here is the driver,” someone said. My first emotion was anger at this man for illegally stuffing so many people into the van, and then his transfer of guilt to the simple mechanical failure of brakes. But after seeing his obviously dislocated hip, femur fracture and open knee wound, the frustration subsided. “They were all on their way to a wedding,” someone said. After hearing that, I just felt tired. After finishing in theater around 10pm, as I walked out into the fresh air of the courtyard, I was met with wailing. My suspicion was confirmed as I was told the man with the flail chest had passed away.

The next day, Christmas Eve, was a new day. The theater staff was super-charged and motivated to clear the board so we could all go home early. By 1pm, starting with 4 rooms, we had cleared another 7 cases. As I arrived home, the kids were gearing up for a serious Christmas Eve Galat family celebration, the main course decided weeks earlier, a rarity at our house in Kenya: cold cut meat sandwiches (salami can run as high as 3200 shillings per kilo, or about 20 bucks per pound!). However, a phone call at 5:30pm threatened to spoil the festivities. “There is a mass casualty going on up in the ER,” the person said on the other line, “and all available doctors are needed now.” As I was putting on my shoes, Emma was obviously upset. “It’s not fair!” she said, “It’s Christmas Eve and we have plans!!” Any “wise” explanation at that moment wouldn’t have mattered, so I just smiled and said, “I’ll be home as soon as I can,” and walked outside into the rain.

A bus carrying many passengers had rolled off the slick road about 10 km from Bomet, and patients were beginning to arrive in Casualty, most of them with minor injuries, but one serious case already in theater. There, the general surgeons had a young man, about 18, on the table with a severely mangled right upper extremity, and a huge laceration of the face and scalp, both ears having been shaved off, the horrible result of being caught between moving bus and road. The only option was an amputation at the level of the shoulder. “He must have been going home for Christmas,” I thought to myself.

After finishing this case, I went back to Casualty, fully expecting to be met with several other orthopedic disasters. However, by some miracle, all the other injuries that arrived were minor, and unbelievably, no fractures! As I walked through the door of my home, just in time for the planned celebrations, Emma burst out with excitement saying, “Dad, God answered my prayers!!” As a family, we attended the Christmas Eve services at Tenwek, then went home and feasted on salami sandwiches, Doritos, Mountain Dew (a rarity in Kenya), and other delicacies, followed by the sharing of our gifts with one another. Emma “splurged” and got me three travel size bars of my favorite soap, Imperial Leather.

Christmas day was much quieter, and we greatly enjoyed having our Christmas meal, meatballs and lasagna, ham and scalloped potatoes, with the Crognales, a missionary family famed for making the best Italian food on the compound. The following day was “Boxing Day” in Kenya, a holiday I am still trying, in vain, to understand. Nonetheless, still a reason to get together and celebrate, so we had a mini orthopedic Kipegange (meaning “party” in Kipsigis), with Meshack, Solomon, and their families, and the Greenes and the Gaws. We wanted to introduce our Kenyan guests to ice cream cones, and Solomon and Beatrice could not understand why Dr. Gaw would be eating what they all thought was the “plastic holder” of the ice cream (i.e. the cone). We all laughed hard, and celebrated together the great things that God has done in and through the orthopedic department at Tenwek…all a result of the advent of Christ as a babe, and through His eventual sacrifice on the cross. The paradoxical mix of sorrow and joy, tragedy and triumph…Merry Christmas and Happy New Year from Tenwek.
Posted by The Galat Family Kenya Update at 12:10 PM

Dan-enjoyed scanning through your blog (my first ever!). Very humbling. Brad

Feliz Navidad from the McCutcheon's in 14 inches of snow in western NC. Will be seeing Jim Moore in about 4 days from Sam's Purse.
Doing some deputation before heading back to Guatemala Jan. 9th 2010.
Praying for all that God is doing there through the Galats!
In Christ,
Dennis and Cindy McCutcheon
http://dennis51.wordpress.com

What a coincidence! We had the same menu for our Christmas Eve as we had to work at Mayo on Christmas Eve day. Mayo Orthopedic Dept is undergoing a lot of changes including us med secys working out of our home to save $$ along with many computer programs needing to learn. Your work is truly amazing at Tenwek. God Bless you and keep you in His loving care in 2010.

I too have a Masai blanket. Mike (my boyfriend, not your brother, ha) was in Tanzania May of 2008 on a missions trip through Scottsdale Bible. He brought me back a red and black one :) I love you all very much...and missed you at the Stuber Family Christmas.

Dan and Heather-
First time on your blog, but had heard you were in Kenya when they highlighted you in a Medsend newsletter! Hope all is well. Jon and I are in AZ, he finished his CRNA degree last August and has been working at the county hospital since then. We have a little one now, Josiah was born in February.
Because of Christ and for His glory,
sarah burge (peters) TIU '96-'00

I have just recently found your blog and I love reading it. I spent some time at Tenwek during the summer of 2008. I just finished working on a book that includes my journal (kept in the form of a blog) and pictures from while I was there. I am hoping to send a few copies to Tenwek in the next few weeks, but I'm writing to make sure that it's okay that I link to you on my website.

I'm guessing that it's okay, but if for any reason it's not, please let me know and I will take it down immediately. God bless!!!

Halo there my name is abdirizaq bashir and i live in narok.Iam a muslim and very much impressed by all that ur doing oer there.i owe tenwek the lives of my mum and dad and will b 4ever indebted to tenwek for treating them both until they both recovered.The mugals will always be welcome to my humble home in narok town.just call 0723258583 or look 4 alsubra building located at the nakuru-narok and narok-sotik junction we run a breakdown towing and recovery service in narok.