When I am Weak… 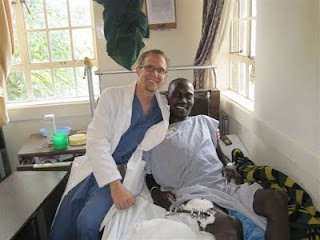 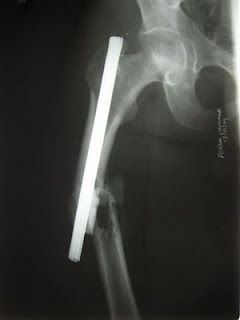 Most of the time, I have a lingering sense of my own weakness in this task of orthopedic surgery at Tenwek hospital. The relentless patient load with complex orthopedic problems, coupled with the responsibility of resident training, staff management, and equipment organization combine to often make me wonder, “What on earth am I doing here?” Sometimes, I feel this sense of weakness more acutely.

After a particularly difficult week, I made my way up for Sunday after-church rounds, which are intentionally more leisurely, taking a little extra time to minister to our patients’ spiritual needs, especially by praying with them. This Sunday, however, as I was feeling a little more self-focused and spent than usual, I was determined to do “lightning rounds,” i.e. to get home as fast as I could, so I could do my own thing. Of course, God, in His sovereignty, often has less selfish plans in store for us.

A man was admitted the night before with a femur fracture. As I looked at the x-rays, the multiple lesions peppered throughout his bones belied the cause of the fracture: multiple myeloma in very advanced stages. I knew his days were severely numbered, and as I explained his condition, I sensed God urging me to go further, although this was beginning to cut into my own plans. “Do you know Jesus,” I asked, a valid question in this part of Kenya, because of the candidly honest answers usually obtained. “No,” he said quietly in Kipsigis. “Would you like to?” I returned. “Please.”

There, in the ward, on an early Sunday afternoon, in front of several other patients, this man, for the first time in 70+ years of life, admitted his need for a Savior and gave his remaining days to his Creator. What happened next humbled me greatly, and reminded me that this is God’s business. Several of the young men with tibia and femur fractures called out, “Please pray with me too!” One man named Peter, about the same age as me, also married with four children, asked for a bible in the Luo language. Peter had been admitted the previous week for complications of a femur fracture fixed at another hospital. Being HIV+ (with a weakened immune system) does not mix well with fractures fixed nominally at ill-equipped, and often very unsanitary, hospitals. After lying in that hospital for three months, he begged to be transferred elsewhere, and he was finally released. He traveled directly to Tenwek, and was admitted with pus pouring out of his thigh. We did what we could, removing the infected hardware and dead bone, and stabilizing the fracture with an external fixator. I promised Peter that I would ask one of the chaplains for a Luo bible for him on Monday.

Of course, Monday came and went, the busyness of the surgical schedule causing me to forget about the bible. On Tuesday, Peter kindly reminded me with his big smile that he had not received his promised bible yet. This time I would not forget, I told myself. I did. Thankfully, God’s sovereignty is greater than my male compartmentalism, and on my way to the choo (bathroom), on a normally untraveled route, I ran into Helen, one of the head chaplains. I told her about Peter, and she then promised she would get the bible for him.

On Wednesday, our busy clinic day, I walked to the wards to check an x-ray, and heard a voice from one of the benches outside where our patients “bask” in the sun, soaking up vitamin D, an essential vitamin for healing bone. “Daktari,” Peter called excitedly, “I got my bible!” I was in a hurry and didn’t feel like talking much. “That’s great…are you reading it!?” I called back. “Yes, and I want to know Jesus!” I stopped there, again humbled by my own inadequacies and God’s far greater and perfectly sovereign plan. I slowly walked over, sat down next to him, and there prayed with him to receive Christ as his Savior.

While orthopedic surgery is my primary “function” at Tenwek, my ultimate purpose for being here is to share that Jesus is the greatest treasure our hearts could desire. What is paradoxical and sometimes incomprehensible, however, is the fact that God chooses to do this work through people who are weak, broken, and selfish, ourselves sinners in need of God’s grace. The reason for this is summed up perfectly by the apostle Paul, who referred to himself as “the chief of all sinners,” when he said to the Corinthians that “we have this treasure (Jesus) in jars of clay (broken vessels) to show that this all-surpassing power is from God and not from us.” In the end, the glory goes where it must.

Not to us, O LORD, not to us but to your name be the glory, because of your love and faithfulness. Psalm 115:1

But he said to me, "My grace is sufficient for you, for my power is made perfect in weakness." Therefore I will boast all the more gladly about my weaknesses, so that Christ's power may rest on me…For when I am weak, then I am strong. 2 Cor. 12:9-10
Posted by The Galat Family Kenya Update at 11:23 AM

That was a good entry; I really appreciate you sending them out.

Wonderful thought stirring blog post. Thanks for sharing! It is great to hear how God is using you in big ways even when we feel small.

Thank you, Dan, for reminding us of the most important things in life.

What a great post. Just what I needed today. Hansen

Dr. Galat-
Thank you so much for sharing your daily experiences with us, and how
God is using you in Kenya. My husband and I are excited about meeting you and your family in January and are praying that God will go before us and prepare the way that we may be used for His glory!
Randy & Kim Martin
Heart Team

Thank you for sharing a great example of how God has us slow down and do his work. It has reminded me during this busy holiday season that I too need to pay attention to the subtle pleas of those who do not know Him. We think of your family often and pray for all of you.