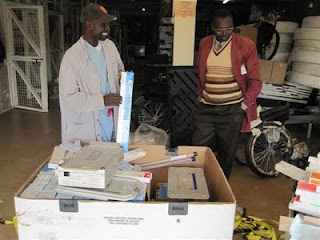 Meshack, our outstanding orthopedic charge nurse, was notably happy at the amount of implants donated, in total, two pallets of equipment weighing 800 lbs. The man in the red jacket is a hospital chaplain who kept asking, shocked, "You put those big metal pieces inside someone's body?" 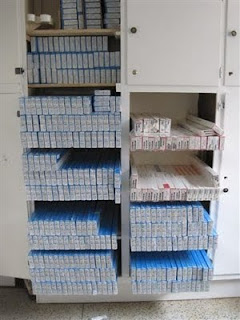 Meshack spent two days organizing and inventorying the donation in the orthopedic storeroom. 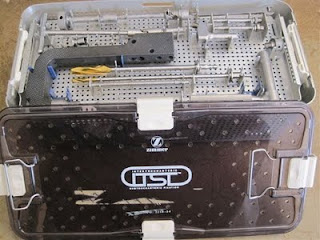 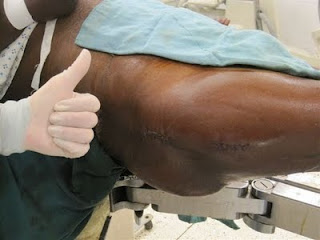 First patient to receive the ITST nail for a proximal femur fracture. The nail is inserted through two incisions each measuring about 2 cm in length. 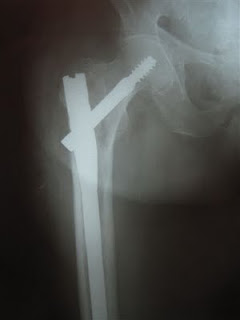 Post-op x-ray of ITST nail.
Recently, the Tenwek Orthopedic Department received a huge donation of orthopedic implants, sent by a group called Hope Force International. Several folks from different areas of the country rendezvoused in Memphis, Tennessee to pack two pallets of a board assortment of supplies: nails, screws, plates (in total 800 lbs of equipment!), to be used for the orthopedic care of the people in this poor region of Kenya. Amazingly, Fed-Ex air freighted the pallets free of charge (even upgraded to “express service”), thus the total time from leaving the US to arriving at Tenwek was only 8 days…and there were no issues with customs. Just yesterday, we used one of the nails, the Zimmer ITST (Inter-Troch, Sub-Troch), for an elderly woman with a fracture of her femur caused by an erosive metastasis of cancer. Although this will not cure her disease, now that the fracture is stabilized, she will be able to move without pain.

As I reflect on the incredible generosity of not just Hope Force, but the many other companies and individuals who have donated time, resources, and personal finances to supply Tenwek with implants, so essential to the practice of orthopedic surgery, and the care of our patients, I am humbled and thankful. I think of the SIGN nail company, whose sole mission is to manufacture low cost implants for the poor in developing countries…I think of an individual who bought a set of plates for Tenwek with his own finances…I think of a sales representative from an implant company who gathered and shipped screws and plates on his own time and dime…I think of a group of students from Cedarville College and their mentors who are designing a new nail to be used at Tenwek …and there are many, many others.

Together, these people and groups are serving faithfully in the way God has called, all of great significance to the work here in Kenya. It is a challenge for me to be a good steward of God’s provisions for Tenwek, and for all of us to ask, “God, what would you have me do today?” The majority of times, the work God calls us to goes “unnoticed” by the world, and the results of which may never be realized to the fullest extent in this lifetime (much like the Heroes of the Faith from Hebrews 11). But, faith in this matter is key, believing that God has a grand, sovereign plan for the redemption of mankind, yet somehow, paradoxically, God uses our small acts of obedience to His call, behind the scenes, to bring glory to his Name, and advance His kingdom.

Hebrews 11:1 Now faith is being sure of what we hope for and certain of what we do not see.
Posted by The Galat Family Kenya Update at 5:23 AM

We are so happy for you and the supplies that you received. I know how much I enjoy my new "hip" and can only anticipate how your patients will benefit. May God continue to bless and lead your family.