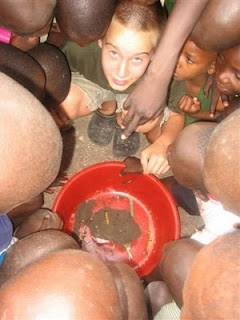 Jeremiah showing the "termite queen" he unearthed to all the Kenyan children. 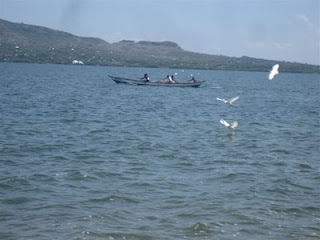 Fishing is the common trade to many on Mfanganu Island. 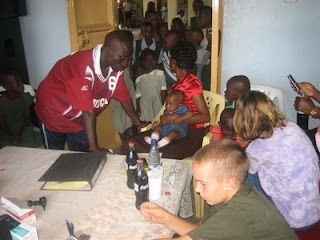 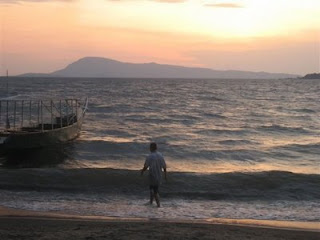 On the beach at dusk, with Mfanganu Island off in the distance.

Two weekends ago, Jeremiah and I were invited to attend a small medical outreach to Mfanganu, a small island with a population of approximately 30,000, directly off the Kenyan coastline of Lake Victoria. Excited to have a concentrated “father-son” time, we stuffed into the small SUV with 6 other people, Jeremiah and I essentially riding in the trunk for the 5 hour painful trek to Mbita, on the Lake Victorian coast. The following morning, we traveled, via an old, hand-made boat, across the strait, to the Island, Jeremiah riding high on the bow to avoid getting soaked like the rest of us (not his first rodeo). Once on the island, we checked into the “guest house,” which was essentially just us…and a host of the most concentrated and diverse variety of insects. I understand now why there is an Entomology Research Center at Mbita.

The most amazing part of the trip was meeting Naphtali, a brilliant Kenyan native of Mfanganu Island, and his family, who are living out daily, in the radical way, the Law of Love. As a young boy, he worked with his father as a fisherman, as so many on the island are employed. However, determined that he would not blindly follow the same pattern, he put his mind to study, and eventually entered the top schools in Kenya. As time passed, he felt called by God to return to the island to serve, and joined Wycliff Bible Translators, translating the New Testament into Suba, the local vernacular. During his translation work, he was moved by the need for practical application of what he was so engrossed in daily. He noticed the large numbers of orphan children on the island, many as a result of HIV/AIDS, and began to take the most needy into his own home. The ministry grew and now, he is the director of the Gethsemane Garden Christian Center, which houses and educates over 450 orphaned children (although now, he does not call them orphans because they have a heavenly Father and they have him).

The medical outreach was to the children of Gethsemane Garden, and once we set up a small clinic, the children began to pour in. Thankfully, Dino and Janice Crognale, both family physicians from Tenwek, were running the show, with Jeremiah and I operating our small, portable pharmacy. Jeremiah enjoyed the responsibility of dosing medications, cleansing wounds, and occasionally, making a diagnosis: “Dad, she needs mebendazole” (medication for round worms). We broke for lunch, and ate a hearty meal of freshly prepared goat liver, (of which Jeremiah ate seconds), and then it was back to work. Towards late afternoon, the "drug seekers" started coming (children who heard we were giving out tasty, grape-flavored, chewable Tylenol), thus I was “allowed” to start seeing patients. A young, and very shy girl sat before me and I asked, “What can I do for you?” “I have a disease,” she said, straight-faced. Expecting the worst, I leaned in and said “What is it?” She replied in the most serious voice, “It is called…the common cold!” I told her that sounded very concerning, but I was confident that she would get better without any tasty, grape-flavored medicine/candy.

On Sunday, before leaving the island, we had the pleasure, and honor, of worshiping with these 450 children of all ages, who were so empty, so poor, possessing only a few material goods, yet so full of God, and deeply loved by one man being practically obedient to the call of God. As part of the service, children were given the opportunity to sing songs they had created. One boy, in particular, sang a strange and powerful melody, a capela, that still goes through my mind today. The entire experience made me consider my own life. Do I have that kind of love, where I would be willing to lay it all down for others? If I am honest, I would say “no…” because I am still so infatuated with “me.” But we are all in process, being changed into the image of Christ, and my prayer continues to be “more of you, less of me,” because on our own, we cannot love with the deep love that is the Law of Christ.

Dan and family, This is John Wright in Rhode Island, an old Tenwek guy. We have communicated by email a little bit in the past. This is a great blog - I've got to learn how these things work and how to respond back to you. I'll work on all of that, meanwhile keep up the great work these at Tenwek for the Lord and the Kingdom of God there. Blessings to you. John

Sounds like a cool father son time in true backwoods Kenya. Thanks for posting so consistently.

I have gone through this blog. I found it very interesting and helpful. Nowadays I am working from my home and studying in a reputed college.
So this blog really doing great for me.