On Injustice and the Human Condition 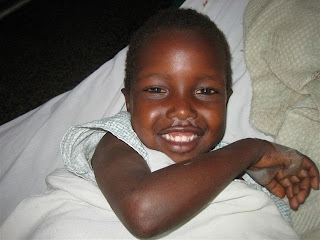 Late last Friday afternoon, I was called to Casualty to evaluate a five year old Masai boy who had sustained a simple forearm fracture about a week ago while playing with his friends. “You’d better put some oil of wintergreen under your nose,” I was warned by the Kenyan intern, referring to the oil used to extinguish the smell of necrotic flesh. As we walked to Casualty, the real story was explained. Apparently, the boy’s father, a Masai with several wives, decided to treat the fracture using an old African method, wrapping the fractured limb tightly with leather strapping. Unfortunately, the boy’s real mother was absent at the time of the injury and treatment, caring for another son who was sick at a local district hospital. After a week in this leather tourniquet, the boy’s arm had completely died, being robbed of vital blood supply, and now he was becoming septic from the gangrenous infection that was developing. As soon as I entered casualty, the smell overwhelmed me. The boy looked sick, hurting, and after one look at the black, necrotic arm, we knew there was only one solution.

Dr. Agneta Odera, a Kenyan surgical resident currently on the orthopedic service, quickly started an IV, while I tried to distract him with “This little piggy…” However, his suffering had been so great, and he was feeling so ill, that the IV barely caused him to flinch. We explained to the boy’s mother, notably angry at the mistreatment of her son by the father, what needed to be done in order to stop the spread of infection. She consented and we quickly wheeled him off to surgery. While we were operating, I could not help but dwell on the injustice of this little, innocent boy’s situation, and the obvious neglect that he suffered by people who were supposed to protect and care for him. “This man deserves to be punished,” I thought to myself while we were closing the wound. Thankfully, the surgery went well, although it is difficult to call an above-the-elbow amputation a success.

Two days later, while rounding, we checked on the boy, and he seemed well, now smiling, even laughing, but yet undoubtedly deeply scarred from the events that he suffered. “The boy’s father has been sent to prison for neglect and child abuse,” Dr. Odera explained. While on the one hand, my personal need for justice in this situation was somewhat satiated by the father’s punishment, I still had the sense that nothing would ever be enough to satisfy this wrong that occurred…nothing, except the blood of Christ, who “himself bore our sins in his body on the tree, so that we might die to sins and live for righteousness; by his wounds you have been healed.” (1 Peter 2:24). In reality, we are all just like this boy’s father, guilty of sin, falling far short, deserving of punishment…yet, in faith, believing, covered by the blood of the One who bore our sin, took our infirmities, and forgave our great sin.

Please pray for this young boy that he would be healed emotionally and physically from this tragic event, and that he would come to know the true Father who always cares, protects, and advocates for him. As for us, it is our privilege to continue in the work here in Kenya to which God has called us. We greatly appreciate your prayers and support!!
Posted by The Galat Family Kenya Update at 9:01 AM

Just to let you know that I follow your blog with keen interest and pray that God will sustain you and your family mightily as you bring glory to Him with your work and witness at Tenwek. It's gotta be challenging to see the brokeness that you see. In all of that, I think of Jeremiah's comment in Lam 3:21-24 "But this I call to mind, and therefore I have hope: The steadfast love of the Lord never ceases; his mercies never come to an end; they are new every morning; great is your faithfulness. "The Lord is my portion," says my soul, therefore I will hope in him.""

I tend to forget that I am not a young man anymore, but I would just love to "park myself" there at Tenwek and help you in any way I could. If medical imaging is not feasible in that setting, I could be a surgical tech, scrub nurse, or whatever! I know - that's easy to say from comfortable USA.

I cannot breath a more heart felt prayer for you than the psalmist in Psalm 121. Indeed, may the Lord keep your going out and your coming in from this time forth and forevermore.

Wow!!! What a story! It totally brings me back! Thanks for all the great work you're doing: it's a tremendous sacrifice (except for the fact that you get Stoney and I can't).

when i saw those 2 pictures posted together i couldn't imagine that smiling face was the former owner of that arm. wow. After all those days of pain I can only imagine how grateful he was to have someone help him. We have people act that way here when we pull out a tooth, and that is only a tooth for crying out loud! I love what you are doing and I love your posts.
btw: did you ever read Don't let the goats eat the loquot trees"(or something like that)?~brin

ouch, dan, didn't we have a similar case when we were there in november? some little kid whose grandpa had wrapped his wrist the same way? that's when you refreshed my memory on hartmann's contracture. did you manage to save his hand? this poor kid has been thru so much, but glad you are there for him, and others who will surely come after him.