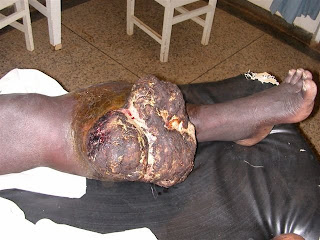 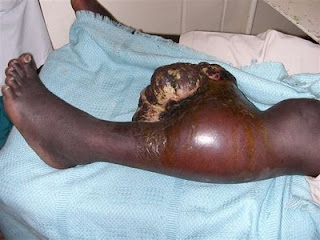 After a long day of surgery, I was called urgently to clinic to see a patient who, I was told, “needed an orthopedic surgeon.” As I rounded the corner, a foul smell filled my nose, and I met a young Kenyan man lying on a gurney. His left leg was covered with a sheet, but I noticed a large lump underneath. He looked sick, with a gaunt face, and sullen eyes. The Kenyan medical intern who had originally summoned me carefully uncovered the largest mass I had ever seen on a patient, at least 30-40 pounds, so large that the patient was no longer able to walk. In my mind, I was reviewing the “differential diagnosis” for this mass, a discipline in medicine in which you consider all the possibilities of the cause of a disease. “Six months ago, he had a biopsy here at Tenwek, and the result was Osteosarcoma,” I was told. Osteosarcoma is bone cancer that frequently metastasizes (spreads) to other areas of the body. Without chemotherapy and urgent removal of the tumor, the five year survival rate is less than 20%. “’He was offered an amputation after his biopsy,” the intern said, “but he refused. Since then, it has grown even larger and now he is consenting.”

While at Mission Training International in Colorado, we were taught that we would face conflicting cultural differences as missionaries in a non-western culture, and that the key to surviving the potential associated frustrations is to “suspend judgment.” Most people are reasonable and rational, and when a situation is viewed through the lens of a different worldview, actions and motives might just make sense. Rather than passing premature judgment based upon your own culture or personal experiences, and assuming ignorance or lack of education, etc. strive for understanding from their point of view.

So why would a young man wait until a mass on his leg has grown to the size of a watermelon, until he is unable to walk, and until the smell is so foul that it sickens those around him, before seeking medical attention? The reason was explained to me by an old general surgeon here at Tenwek. An amputation, in any culture, is not viewed as a desirable surgery. In African culture, however, an amputation is like having a death sentence. Here there are no local prosthetists to fashion prosthetic legs, no Africans with Disabilities Act (ADA) to ensure assessable public facilities and rights for those who are handicap, or wheelchair assessable homes. So even with a growing, painful tumor, an amputation is not considered a viable option. Unfortunately, during that time, the cancer metastasizes to the lungs or elsewhere and then truly becomes a death sentence. The tumor continues to grow until it becomes unbearable, medical attention is sought, and an amputation is finally performed. However, at this point, it is too late, and the patient dies a few months later from metastatic spread of the disease. Word then gets around that if you go to Tenwek and get an amputation, you will die in a few months. Thus, the cycle is perpetuated. Although not based on truth, the patient's reason for inaction now made some sense.

The practice of “suspending judgment” has a definite broader application than just international medcal missions. Consider the relationships in our lives: between husband and wife, father and son, mother and daughter, boss and employee, pastor and congregation, and friends. If we could give each other the benefit of the doubt, and choose to listen and wait before passing judgment, we just might understand.

Posted by The Galat Family Kenya Update at 1:40 PM

Dan,
I must say Emily and I have read your Blog with enthusiasm since you and Heather and the kids have embarked on this mission!! I admire your work ethic, humility and dedication to God's will for your life!! You and your family are often in our prayers!! This is an excellent post on not reserving the passing of judgement on others!!

I think your blog is really interesting ... especially this post :)

I just wanted to Thank you for all your weekly updates and letting us in on what's going on in your lives & your patient's lives too.

It's so amazing how God is using you & your Family over there.

The wisdom & guidance God is giving you is so aweosme to see.

I'm keeping you & your Family in my prayers.

was bob wesche the old general surgeon? the man is full of wisdom and insight. hope you were able to help this young man, but we see so many things that make us feel so helpless, dont we. great post on suspending judgment. so many times it is easy to get frustrated and say if they would only not do that (smoke, refuse tx, live that lifestyle) this wouldnt have happened, and to well, blame the victim. but it is when people like you try to meet them where they are at that you will have the best chance to connect to them where they need you to, and to reach them. btw, i dont know where else to post this (i am new to blogging) but if you need any medical supplies email me at wsngmartin@yahoo.com and i will do what i can. i have some trach tubes and pleurivacs and staplers for russ.....i will try to send them out with outcoming missionaries