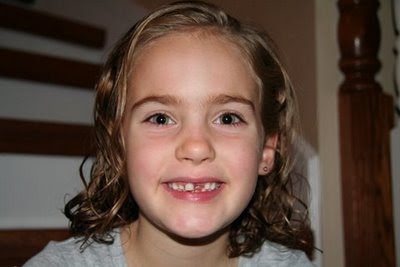 Claire has had an extremely loose front tooth which she has been pampering for the last two months. She would not let anyone even come near it, including the master tooth puller, Grandma Galat. “I’m the boss of my own tooth,” she told me in her trademark raspy voice. With all our transition, and with emotions running high, as a sensitive dad, I figured it was best to just “let it be. Eventually, it would just fall out on its own,” I reasoned. However, this last week, I had had enough. It was pointing almost 90 degrees straight forward, and was starting to turn grey. So I turned up the heat a bit, bribing her, like a good conscientious dad, with candy, and money. No dice.

So then I gave her the ultimatum: she had five minutes to pull it herself or the “tooth fairy” was going to do it himself (in our family, it is actually believed that the tooth fairy is a male??). She insisted she did not need anyone’s help, so she went into the bathroom alone, determined to get the job done. A few minutes later, she dejectedly emerged of the bathroom, ashen and sweaty, and mumbled something about feeling faint. I told her to let daddy take a look, and it was literally hanging by a thread. I rallied behind her, and encouraged her to simply grab it with a Kleenex. She did so, and, without her even knowing, the tooth was finally extracted. Once she realized the job was done, she burst out with joy and laughter, relieved, and perhaps surprised at how easy it was. “That wasn’t so bad!” she exclaimed.

How true that our nature is to say, “I am the boss of my own life.” Our sin and pride deceives us into thinking that we are the master of our own destiny, and that we must provide for ourselves. “If we don’t, who will?” The lure of security drives us to hold on to temporal things that seem so precious, and that would feel so tragic to lose. But reality is that we have a sovereign creator who lovingly drives the ship of our lives, who promises to give us what we need (not necessarily what we want). And our attempts to provide for ourselves are broken, counterfeit, poor substitutes. We just need to let go, and trust that what God has for us is so much better than anything we could incompletely provide for ourselves. And perhaps, like Claire, we too will realize our fears may have been unreasonable, and be surprised and relieved by joy.

"My people have committed two sins: They have forsaken me, the spring of living water, and have dug their own cisterns, broken cisterns that cannot hold water.” Jeremiah 2:13

"The kingdom of heaven is like treasure hidden in a field. When a man found it, he hid it again, and then in his joy went and sold all he had and bought that field.” Matt. 13:44

We are now on the home stretch, leaving in two short days. The packing is complete: 20 Rubbermaid “Action Packers” and 2 duffle bags, each packed precisely to airline standards (or so I hope). Please keep us in your prayers for "traveling mercy." Soon, according to MTI, we will enter the CHAOS stage of transition (so looking forward to this!)

N.B. Claire’s neighboring tooth is now ripe for pulling. However, she told me today she is in charge of that tooth as well. Learning to let go is a process for us all! Thank you for your prayers and support!
Posted by The Galat Family Kenya Update at 3:32 PM