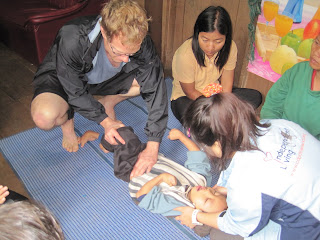 Examining a young boy with cerebral palsy for hip problems. 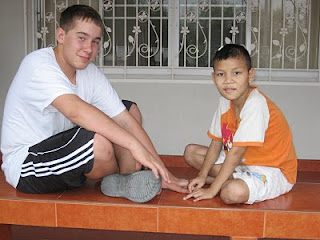 Jeremiah and Sutee, hanging out at the House of Love. 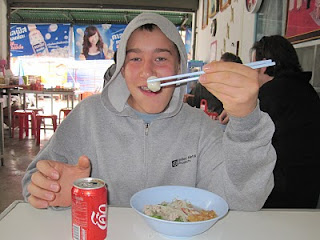 Jeremiah adeptly handles a "fish ball" with a pair of chop sticks. 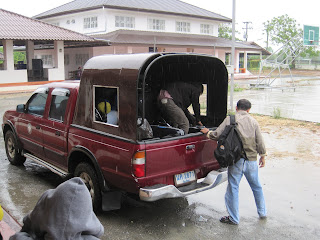 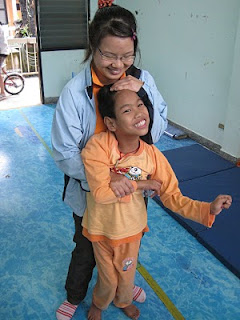 
Jeremiah and I returned Sunday night from our trip to Thailand and were so thankful for the opportunity to participate in the lives of children who would, according to Jesus, be rightly considered the “least of these.” During the week, Jeremiah and I did a study of the book of James, and we were struck especially by James 1:27: “Religion that God our Father accepts as pure and faultless is this: to look after orphans and widows in their distress…” There is a tremendous amount of paradox in this because the world completely rejects these kids at the House of Love…orphans, many HIV+, ethnic minorities, disabled…and accepts those who are strong, capable, “loveable.” But God promises to be a Father to the fatherless, the defender of the defenseless…He loves the outcasts and rejected. This is what makes Hope for Hilltribes (and other ministries focused on “the least of these”) so unique and “blessed” by God.
We arrived in Chiang Mai on Monday afternoon and after checking into the “M.D. House” (which proudly advertised itself as the 3rd best hostel in Thailand?), headed to the House of Love via a sweet, three-wheeled “tuk-tuk.” There, we met the kids, including Sutee, a 10-year-old boy who came to the House of Love about 3 years ago…deaf, mute, HIV+ and an orphan with no family, considered the “village idiot” because of his inability to communicate (perhaps the result of having been affected by congenital syphilis which can cause deafness, and the characteristic flattened nose which Sutee demonstrated) and with multiple scars marking the resultant abuse he suffered. According to Kim, the missionary who started the House of Love, Sutee was completely detached emotionally when he first arrived. But now, he is one of the most animated kids I have ever seen, almost annoyingly so, communicating with a self-developed, and fairly sophisticated sign language which included a lot of touching (no concept of personal space with Sutee, but that was just fine). God continues to teach me to love the way He loves.
The following day, we took the kids swimming at a “resort” with a very fine, slightly murky green pool, where there was much frolicking, slashing and cannonballs, as demonstrated by the master, Jeremiah. On Wednesday, it starting raining, and the temperature dropped into the 50’s (according to Kim, the coldest she had seen in Thailand during her 26 year stint), just in time for our 5 hour road trip via pickup truck stuffed with 4 adults and 6 kids into the hills of the ‘golden triangle’ region of Thailand, to the small town of Mai Sariang, the location of the Christian Center for the Development of People with Disabilities (CDPD). Jeremiah and 3 others rode in the back of the pickup, covered by a make-shift cap, but unsealed from the elements. They persevered the cold rain for 5 hours, the trip unbroken except by a short lunch of trademark Thai soup with noodles and “fishballs”(foul-smelling, gelatinous morsels that even Jeremiah -the teenage version of Andrew Zimmern - could barely stomach) at a road-side café. At the CDPD, we met the incredible Thai staff dedicated to ministering to families with disabled children and we delivered the wheelchair Fred brought all the way from Columbus Ohio for a girl with cerebral palsy. We made the return trip to Chiang Mai the following day after staying a night at the “luxurious” Northwest Lodge, where I don’t think the sheets had been changed in at least a month, as evidenced by the strange scent and blood stains which prompted me to request they be changed.
On the return trip, Jeremiah developed a headache, fever and chills, no doubt the result of his cold ride up the mountain the previous day. He had no other symptoms however…no GI distress, no sore throat, no cough…just this recurring and high fever (mixed with a little delirium), held at bay by steady administration of ibuprofen. Finally after two days of worsening symptoms, I started him on antibiotics which I brought along “just in case” and the fever broke. Only afterwards, did he develop a sore throat with inflamed and purulent tonsils…likely strep throat. Thank God for antibiotics!
Overall, the trip was humbling, yet, simply, a lot of fun. Thanks for praying for Jeremiah and I and for praying for these kids. If you are interested in learning more about Hope for Hilltribes, I encourage you to visit Freddy’s website. Let us encourage one another to be involved with “religion that is pure and faultless”…and receive the incredible joy and satisfaction that accompanies it, all made possible by the Cross of Christ.
Posted by The Galat Family Kenya Update at 1:19 PM