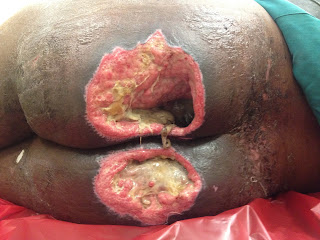 Mr. Joseph's pressure sore, in the operating room, prior to sharp debridement. 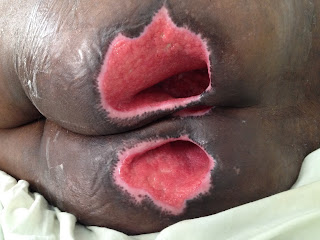 After a few days of honey dressings.  Note the wet, white fibrous tissue is completely gone, and the wound beginning to heal with nice red granulation tissue. 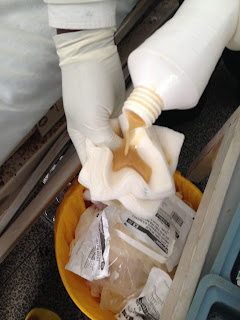 The honey is obtained raw and first strained with a sieve to remove all solids (but not enzymes). Then the honey is diluted with normal saline to make it more manageable. 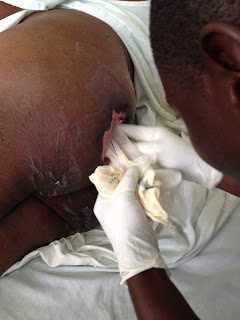 Gauze, soaked in honey, used to pack the open wound.  Mr. Joseph's grandson is packing the wound himself after expert training from our wound care nurses. 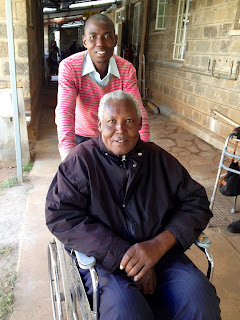 Mr. Joseph and his grandson, on the day of discharge.  Oh, happy day for all.

Every once in a while, we care for a patient at Tenwek who defies the “natural order of the expected,” and demonstrates that we serve a God who intervenes and heals according to his sovereign plan.   Mr. Joseph (name changed), an unfortunate man in his 70s, was admitted to Tenwek after a horrible road traffic accident in which he suffered injuries a 20 year old would have difficulty surviving.  In addition to an open left ankle fracture, his left hemipelvis was completely crushed, injuries in an elderly man which would spell almost certain death in our environment.  After thorough washout of the open ankle fracture, given his age and co-morbidities, the decision was made to treat these very severe injuries non-operatively with bed rest.  Due to scarcity of bed space, he was placed on a ward far from orthopaedics, and unfortunately (because of his non-operative status) far from the top of our daily “tyranny of the urgent” list.

Famous for my overly keen sense of smell, one morning during 7am report, I noted a scent quite different from the normal stench of the wards in the morning (a potpourri of smells too challenging to put to words – more than one visitor has had to sit down during rounds secondary the dizziness).  “What is that horrible (new) smell?” I asked the intern on orthopaedics.  “Do you remember Mr. Joseph?” he asked, looking somewhat forlorn.  The name jogged my memory, and I said “Oh yes…the old man with that terrible acetabular fracture we were treating with bed rest.”  The intern replied, "Yes, that’s right.”  “Somehow he developed a huge pressure ulcer on his sacrum and we transferred him to orthopaedics so we could keep a better eye on him.”  My heart sank as I said, “Let’s go take a look.”

Upon entering his room, my nostrils were completely assaulted with the foul smell of rotting flesh mixed with other unmentionables.  Overall, Mr. Joseph looked ill, on the verge of sepsis, as did his helpless roommates who were themselves enduring the smell in that crowded, warmish room.   Rolling him on his side, a huge pressure sore covering his entire rear-end was revealed, skin eroded all the way down to bone with wet, white fibrous tissue covering the gaping holes.  Only twice in my medical career have I ever gagged…the first was as a naïve medical student when the chief resident in general surgery told me to go smell the stomach wound of a patient “so that I would know the scent of pseudomonas infection.”  This was the second time.

The first thought that went through my mind was that Mr. Joseph would never survive this massive pressure sore, and my inclination was to let the family take him home to die.  However, his oldest son completely refused, saying that his father would live, and be completely healed from both his injuries and complications.  After explaining the details to the family, and the length of time it would take to clean up and heal this sore, the first step was to take Mr. Joseph to the operating room for a sharp debridement.  So, later that day, after our normal queue of trauma cases, Dr. Lando and I explored and debrided the wound in the operating room, finding it much deeper and more severe than we had originally thought.  We cleaned it the best we could.  “Now, let’s start thrice daily wet-to-dry dressing changes and hope for the best,” I told Dr. Lando, still with significant doubt that the patient would survive.

After a few days of dressing changes, the wound looked only marginally better - less smelly, but still with necrotic margins, and lacking healthy granulation tissue (the beefy-red tissue the body forms to heal and close wounds).  One morning on rounds, Dr. Louis Carter, a seasoned plastic surgeon himself in his 70s, who visits Tenwek regularly to teach the residents (and consultants) about wound coverage and care, said, to my interest and surprise, “What that wound needs is a little honey.”  I’m sure my face entirely revealed what my mind was incredulously thinking: “Honey...you’ve got to be kidding!?”  Dr. Carter explained that God made honey not just for gastronomic pleasure and biblical imagery, but also for wounds - that the enzymes and sugar in honey fight harmful bacteria and fungus, and encourage the formation of healthy granulation tissue.  “But it can’t be the highly processed honey like you find in the supermarket,” he said.  “It has to be completely raw, with the comb and bees and everything else in it.”   “Well, what do we have to loose?” I said.

Mr. Joseph was transferred to the Wound Ward, the finest raw honey was sourced from the local Mau Forrest, and the unconventional honey dressing changes initiated.  Amazingly, in just a few short days, the wound completely turned the corner – the smell completely left, the fibrous margins disappeared, and the most beautiful beefy-red granulation tissue appeared.  Excitedly, we continued the daily changes, and when we ran out of the first bottle of honey, we all exclaimed, “Get honey with even more bees in it!”  Soon, the wound was closing well and the patient was being mobilized to a wheelchair (by now, the fractures totally healed).   Even Mr. Joseph’s grandson, who wants to become a nurse, was trained to perform the daily honey dressing changes.

After several months with us at Tenwek, wound still open but much smaller and healing nicely, Mr. Joseph was discharged from the hospital.  I saw his oldest son that day with a veritable smirk on his face.  He reminded me of his faith - that God would heal his father as we had together prayed.  A flood of paradoxical emotions washed over me: guilt for indirectly playing a role as consultant in the neglect that caused the wound, thankfulness for Dr. Carter’s inside knowledge of the medicinal value of honey, and marvel that God has the final say on life and death.

Scripture is full of imagery related to honey, and the parallels with Mr. Joseph's story are astounding.  God’s just decrees, when believed and obeyed, are said to be sweeter than honey (Psalms 19:10).   Gracious words are said to be like “a honeycomb, sweetness to the soul and health to the body” (Proverbs 16:24).  God's gracious decrees, His promises, bring healing and life to foul wounds.  And, at the end of time, those who put their hope and trust in God will enter the ultimate Promised Land, a Land flowing with milk and honey - perfect healing for our wounds, and victory over death - purchased by the precious blood of Christ shed for us on the cross.  Grace, forgiveness, healing, hope, life…sweeter than honey.

Thanks for all your prayers and support for our family!
Posted by The Galat Family Kenya Update at 4:44 PM

Thanks for the pics :) I'm a nurse and will never get used to those pics. I can almost smell the wound just looking at the pics. Yes honey dressing is the best!! Praying God's blessings on your work!