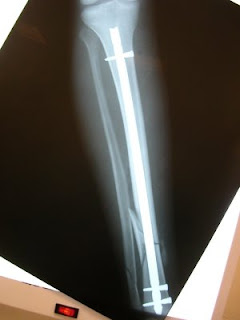 
Kipkirui, a young 20 year old man, was involved in a RTA (short for road-traffic-accident, of which there is no shortage of here in Kenya) early last week, and sustained a closed tibia (shin bone) fracture. The treatment for this is fairly routine…a large nail placed down the shaft of the tibia to secure the fracture, holding it until healing is complete. We used a new nail system called SIGN, which God miraculously and sovereignly provided through a series of divine events that occurred last fall while we were preparing to come to Tenwek. The SIGN nail was designed specifically for use in third world countries, with the goal of providing equality of orthopedic care around the world. Where patients with fractures used to be in traction for several weeks in bed, or in casts for several months, now with nailing, they are able to mobilize the day after surgery.

Having heard about the SIGN program through a consultant friend at the Mayo Clinic, I applied last summer for Tenwek to be a program site. Once accepted, and after the funds for the manufacture of two instrument sets and the first 100 nails are raised, SIGN commits to continuously provide inventory, free of charge, as long as each case is reported online in the SIGN database. About a month after I applied, I received a random email from an orthopedic surgeon who had been to Tenwek several times, yet I had never met, telling me about a chance meeting he had with a consultant from the Mayo clinic at the annual SIGN conference in Washington State. During casual conversation, they discovered that they both had ties to Tenwek, one had visited, and the other knew me as a resident. This prompted talks about what could be done to expedite Tenwek’s acceptance as a program site, and a week later, I received an email from the SIGN program founder telling me that Tenwek was accepted, and incidentally, the upfront costs for manufacture were already covered! A month later, the nails and sets arrived and were packed in the “Action Packers,” ready for the trip to Kenya. So far we have done eleven SIGN nails, and they have been such a blessing for the work here.

The day after surgery, Kipkirui was doing well, and was able to get out of bed and begin to mobilize. However, later that afternoon, he developed significant shortness of breath, and was noted to be breathing very fast, about one breath per second, and his heart rate was 150. Checking his oxygen saturation, it was well below normal. With this constellation of clinical symptoms in a young patient with a fracture, the diagnosis is fairly obvious: fat embolism. This rare, yet serious complication occurs when bone marrow fat from the boney canal gets into the bloodstream and showers vital organs with emulsified fat, setting off an inflammation cascade, of which the lungs are especially vulnerable. There is debate about when this occurs (i.e. at the time of the initial injury, or when the nail is placed into the canal), but overall, the prognosis is very poor, and even in the best institutions, patients die from fat embolism.

Kipkirui’s condition rapidly deteriorated. Sovereignly, the same orthopedic surgeon who emailed me last September from the SIGN conference (and is currently visiting for 5 weeks), was present with Kipkirui during this ordeal, and explained to him what was happening, and that while we would do all we could to support him while his lungs recovered, there was a possibility that he was not going to survive. The surgeon asked him if he had faith in Jesus, and he assured us that indeed he did. Shortly thereafter, he grew more distressed, as it became more difficult to breathe. Thus, he was transferred to the ICU and intubated with a breathing tube. When I saw Kipkirui in the ICU that night, we were struggling to keep his oxygen saturation above 90%, even with pure oxygen and pressure ventilation. Frothy blood was evident in the suction canister next to his bed, signs that his lung tissue was severely injured from his body’s own inflammatory cells. I went home that evening wondering if he would be alive the next morning. All we could do, at that point, was pray.

The following day, I made my way to the ICU, concerned with what I might find, but hopeful since I had not received any pages. As I walked in the room, Kipkirui was lying in bed, comfortable, still intubated, but awake, following commands, and looking very good. His tube was completely clear of blood, and now, his oxygen saturation was 100%. He honestly looked to me as if he made a complete and miraculous recovery. We are currently weaning him from the vent, and tomorrow, God willing, he will have the breathing tube removed.

Sometimes we pray and God works in powerful ways…other times, He seems silent. Sometimes patients live, and sometimes they die. Overall, we know that our sovereign God has all things under his control, and He does as He wills, according to His purposes, for His glory. Yet, somehow, our prayers play a significant role in this divine drama, a truth that, although beyond our understanding now, has implications for all eternity.

Then Jesus told his disciples a parable to show them that they should always pray and not give up. Luke 18:1
Posted by The Galat Family Kenya Update at 1:37 PM

enjoyed your post, dan. hope kip makes it out OK, but i do know he is in good hands....many of them, some not entirely visible to the human eye. we continue to keep you and your family in our prayers.