Just Along for the Ride 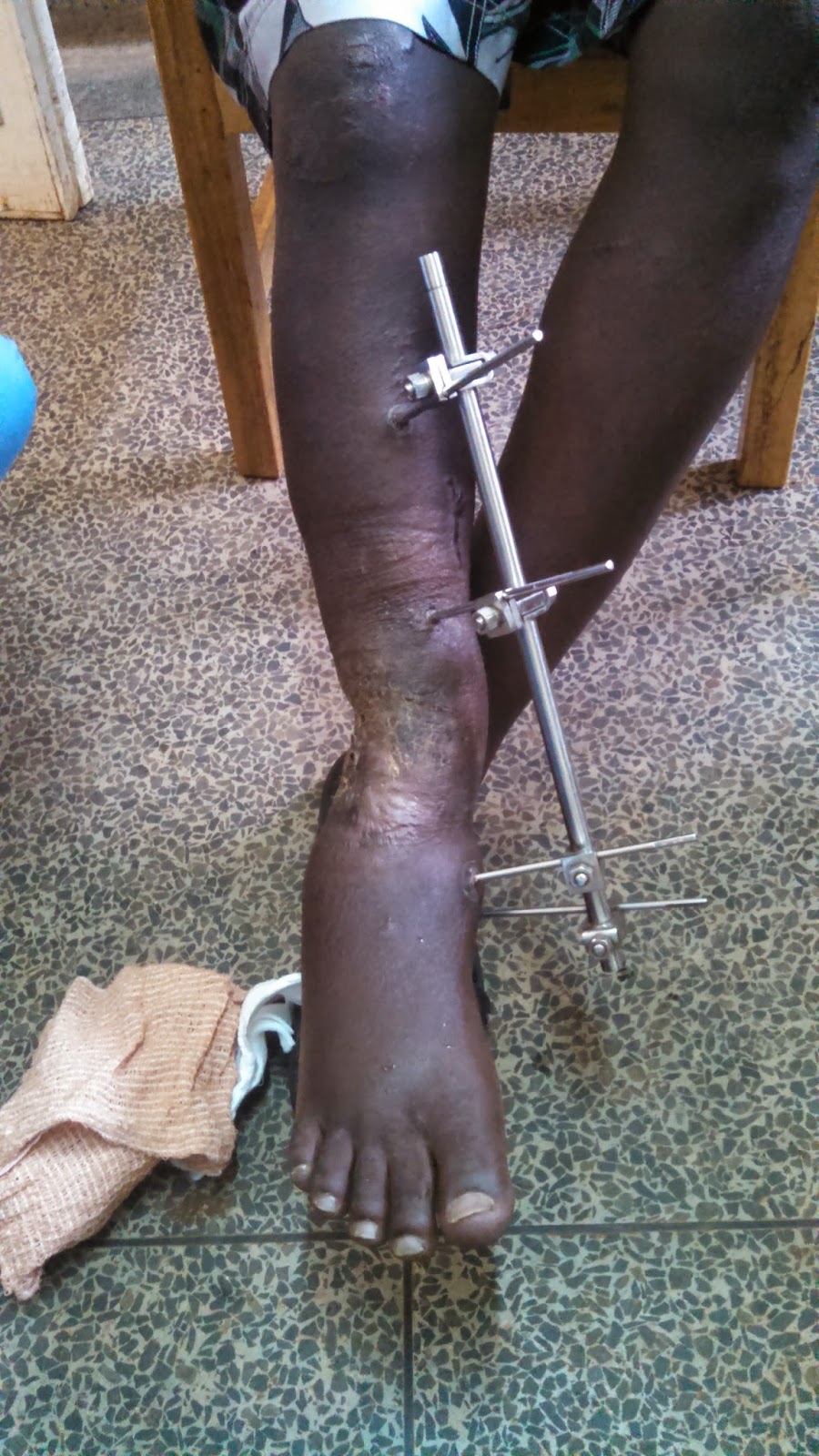 This patient suffered an open distal tib/fib fracture which was treated with an external fixator at another hospital (what we call a "Kisii special"). 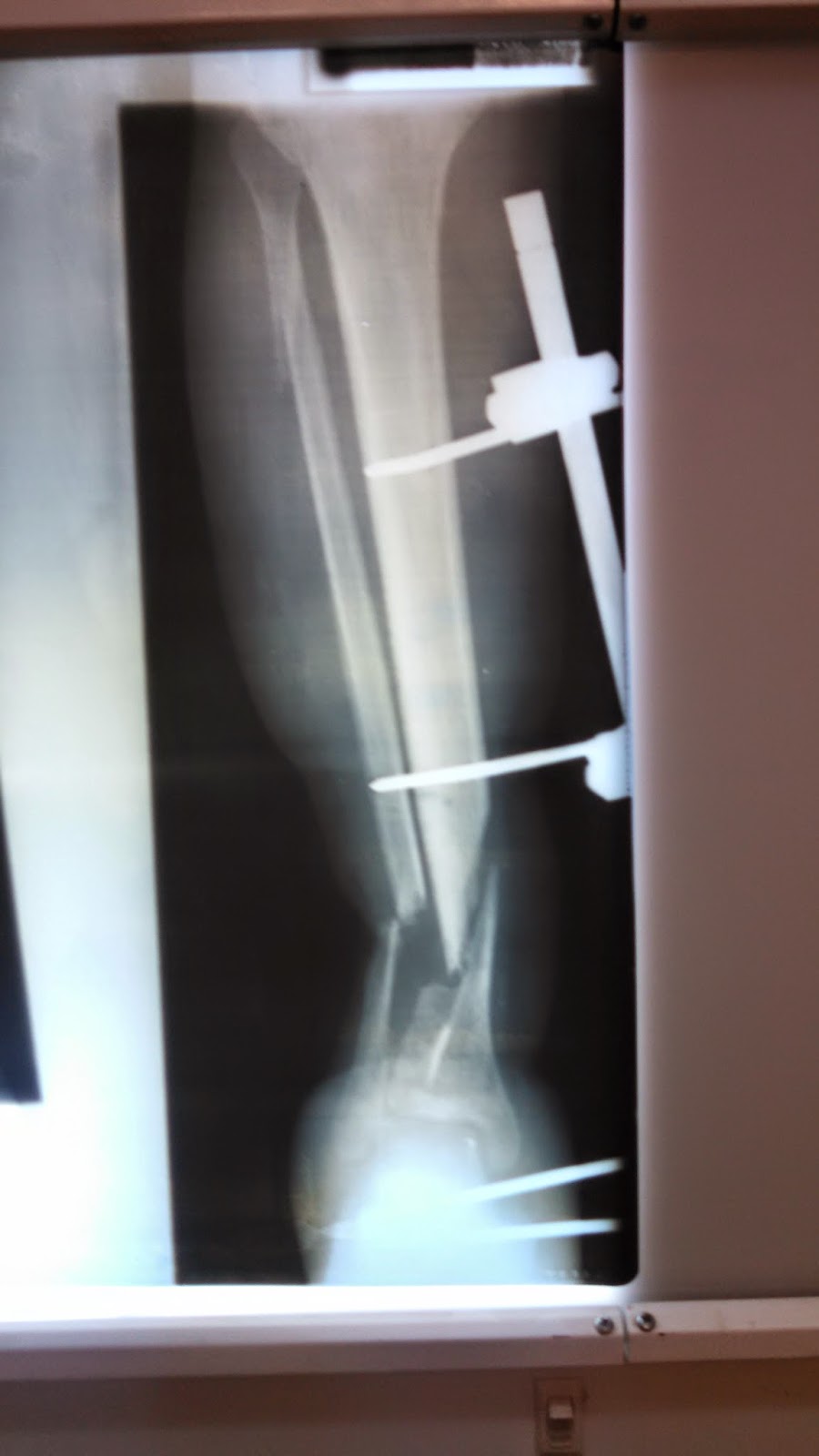 This fracture was particularly difficult to treat because of the amount of bone loss and angulation. 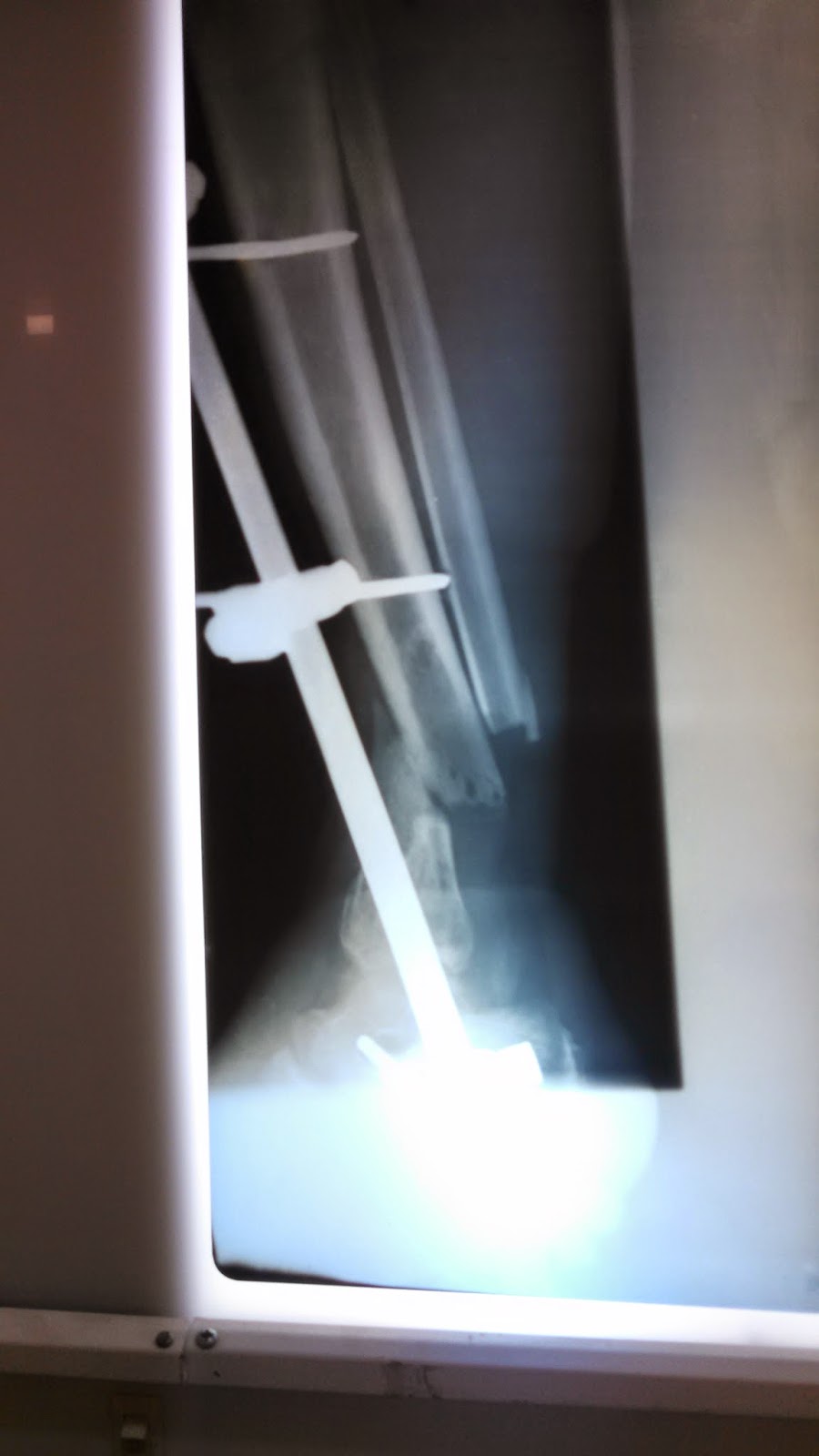 Also challenging was the amount of displacement and angulation of the fracture which had been in this malposition for many months. 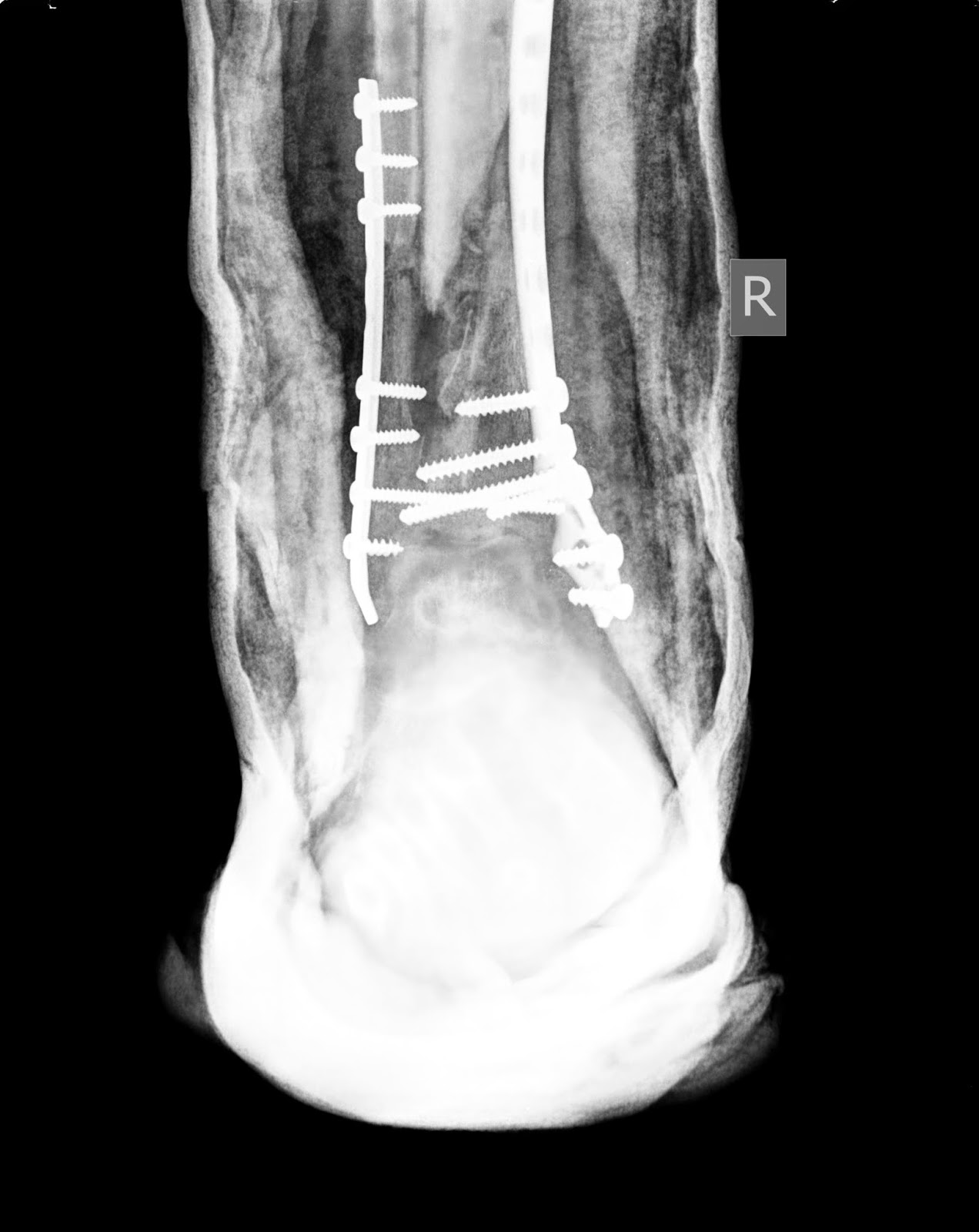 The fracture was expertly treated by visiting physician Dr. Frank Bryant, who used one of the donated Biomet plates.  He filled the bone defect with graft taken from the iliac crest. 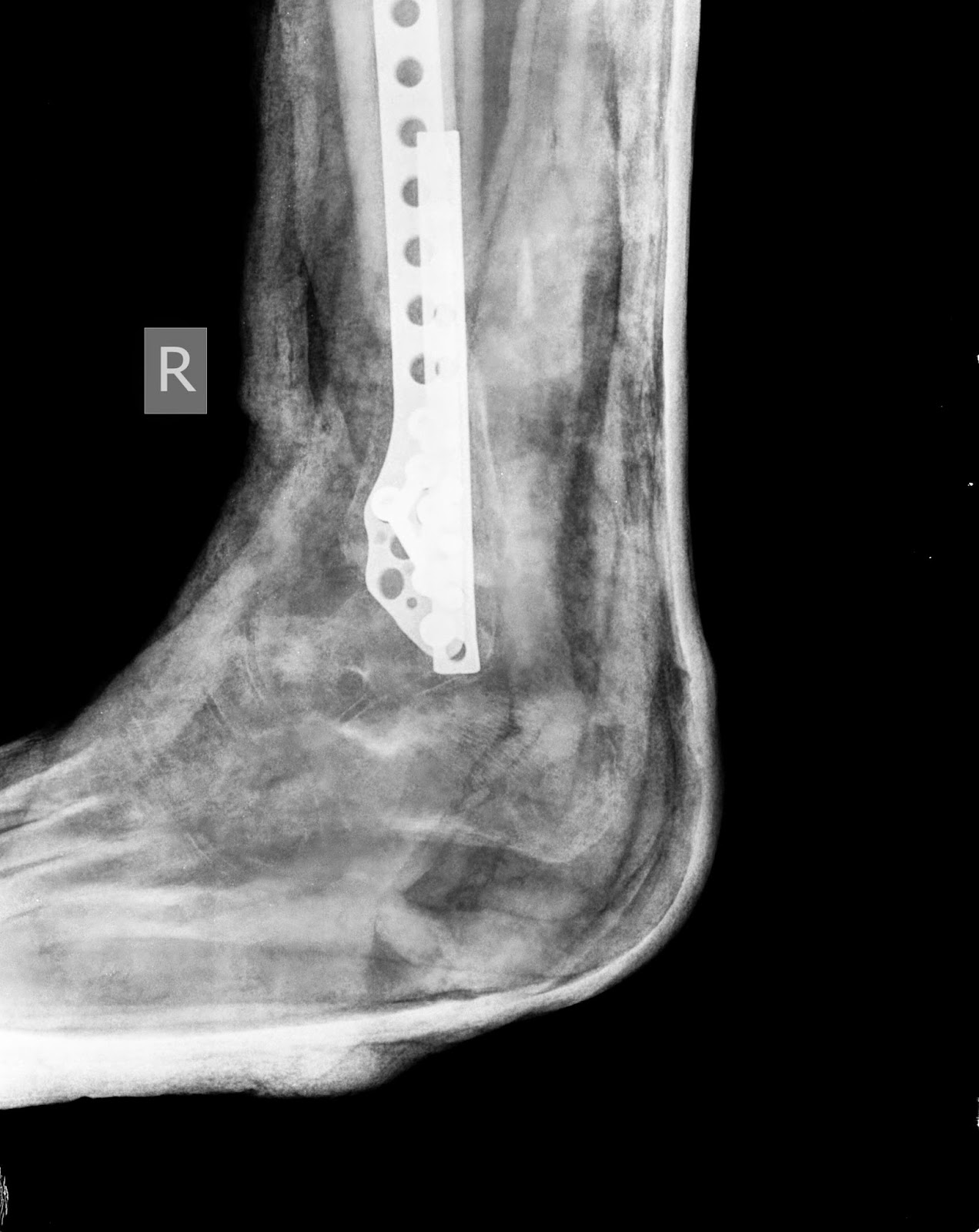 Overall, the fixation was solid and alignment anatomic.  Now, the result is in God's hands.

Since 2012, Biomet, a major orthopaedic implant company, has been supplying Tenwek with critical implants designed specifically for the treatment of complicated fractures that occur in and around major joints (hip, knee, wrist and ankle).  The manner in which this partnership was established was a total miracle in itself (perhaps to be told at another time).  Recently, another orthopaedic company called Zimmer purchased Biomet and the merger is currently ongoing.  Naturally, we at Tenwek have been wondering how this merger will affect our ongoing partnership and the supply of these important implants.

Being stateside for a few weeks this month, I was honored with an invitation to speak at Biomet’s annual Christmas party.  They mentioned that if I could come, they would also arrange a short meeting with the CEO of Zimmer to introduce him to the work at Tenwek.  So just a few days after landing in America, I traveled to Warsaw, IN, where three of the top five ortho implant companies reside.  The presentation at the Biomet Christmas party was well received as I communicated the blessing they have been for us at Tenwek, and thanked them on behalf of the many patients who been helped with their implants.

Following the presentation, I traveled across town with the two Biomet executives who have spearheaded our partnership, and we had our meeting with the CEO of Zimmer. As I communicated with him about Tenwek, he seemed to track with significant interest.  He also mentioned that once the plans for our Orthopaedic Center of Excellence become more solidified, that we should meet again.

God continually reminds me of two things: (1) He is entirely sovereign and (2) He loves the poor.  The orthopaedic work at Tenwek is wholly His, and we just have the privilege of joining Him on this wild ride.

Thank you for your ongoing prayers and support for our family.   Without it, we would not be able to continue at Tenwek.
Posted by The Galat Family Kenya Update at 9:12 PM