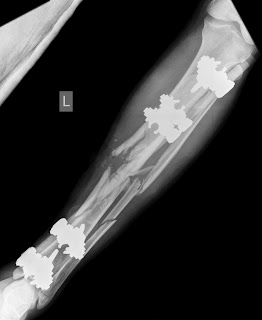 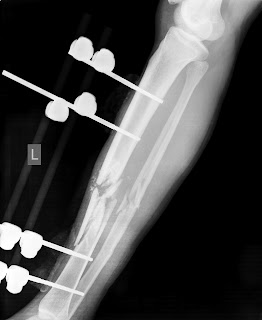 We were amazed at how well the bones were aligned despite not using C-ARM or x-ray in the operating room to assist.  Evidence that God was in control of this case. 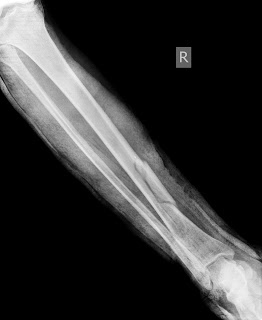 The right leg fracture was not as severe, but the soft tissue injury was more extensive.  We were able to use a cast to hold this fracture in place. 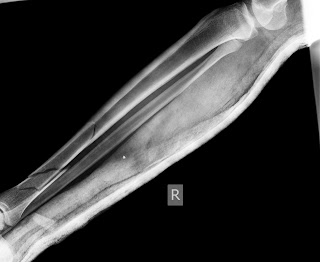 Last Saturday evening, Heather and I had just settled down in front of a perfect fire, prepared for a quiet evening at home after a long week of intensive language studies and surgery, when my pager went off.  I had almost forgotten I was on-call, and while walking to the phone, I determined to dispatch of this call quickly so that I might return to my respite.  The general surgery resident efficiently rattled off three cases that had already been handled by the on-call team.  A distal radius fracture had been reduced, a closed femur fracture had been admitted, and even an open tibia fracture, secondary to a boda-boda (motorcycle taxi) accident, had already gone to theatre and been “washed out.”


“I love having good residents on call,” I thought to myself, assuming the resumption of my evening of comfort was imminent.  Then came the pièce de résistance, a universal phenomenon in which residents always “save the best for last.”  “One last patient I want to run by you,” said Liz.  “Go ahead,” I said slowly, trying to hide my reluctance, instinctively knowing what was coming.  “It is an 18 year old boy with gunshot wounds to both legs, with bilateral open tibia fractures.”  Gunshot wounds (GSW as they are called by trauma surgeons) can be very challenging injuries with significant soft tissue loss and shattered bones.  “The patient was already ‘washed out’ at another hospital in Kisii, but we are wondering if he needs to go back to surgery again tonight,” she said, as if almost curious to see what I would say.  For a moment, I almost caved and pushed the case until the next day.  But knowing the poor quality of treatment at certain other hospitals, and not wanting to dump more work on the already over-worked Dr. Rowe, I said “we better take him back tonight.”


It was almost midnight as I left my warm house into the chilly night, being technically “winter” here at Tenwek, a few clicks south the equator, with lows at night in the mid 40s.  While walking up to the hospital, I passed the night watchman who was bundled in a bonafide winter coat, replete with a fur-lined hood.  (I have seen toddlers here dressed in snow suits on 75 degree, perfectly sunny days, reinforcing the concept that “cold” is definitely a relative term).  “I must be becoming more Kenyan,” I thought to myself as a chill ran down my spine, forgetting what “cold” really is having spent five long winters in Minnesota during residency.  When I arrived in theatre, Liz told me the rest of the story.  “Apparently, some thugs broke into the boy’s family home and were slashing his father with a panga (machete).  While trying to protect his father, the boy was shot with a single bullet that passed through both legs, shattering both tibiae,” she said.  “Then the thugs ran.”  She continued, “He was taken to a small hospital in Kisii where both legs were “washed out” in theatre and splinted; he was then transferred to Tenwek for definitive care.”


After the spinal anesthetic was given, we removed the make-shift splints which were placed at the other hospital, and discovered that both legs were still dirty, indicating that a good I&D had not truly been performed, and wounds hastily stitched with thick, braided suture.  The first task was to thoroughly wash both legs, which was no easy task for only two people (thus prompting a call for chief resident reinforcement).  After a full “prep and drape,” we extended the incisions on both legs, washed the wounds with several liters of normal saline, debrided the dead muscle and tissue, placed a fixator on the left leg, lined up the fractures as best as we could without C-ARM, miraculously closed all wounds with minimal tension, and placed a plaster splint on the right leg, all of which took a little over two hours.  It was one of those cases where we all felt Christ directing our hands, and sovereignly blessing the work.   As I walked home, passed the bundled guard, and entered my still-warm home, I thanked God for giving me the grace and strength to do the right thing for this young man, and set the right example for the residents and staff, despite my strong, fleshly, continuous, selfish desire to remain comfortable.


This past week, I returned to language study, and today, went to the ward to check on this patient, only to discover that he had already been discharged from the hospital!  Please pray for God’s complete healing in this young man’s life: spiritually, mentally, emotionally and physically.  Thanks for all your prayers and support without which, the work here would be impossible!


Col. 3:23-4 Whatever you do, work at it with all your heart, as working for the Lord, not for men, since you know that you will receive an inheritance from the Lord as a reward. It is the Lord Christ you are serving.
Posted by The Galat Family Kenya Update at 1:19 PM

God Bless you Dan. We pray for you and your family. Dort and Erv

Thanks so much for sharing these honest and willing words. I'm so honored to know you guys! Praying for you.