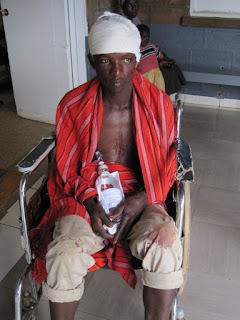 Walking through Casualty last Friday night, making one more round to see if anything was brewing before heading home for our weekly family “pizza night,” I saw two young Masai men, both significantly bruised and bloody, bandages on their heads, sitting stoically awaiting their turn for x-rays. “What happened to those guys,” I asked a nearby intern, thinking perhaps they engaged each other in a good mid-December drunken brawl. The intern replied, “They were tired of the lion that was killing off their livestock, so together, they speared it.” I could only imagine the scene as it unfolded, an obvious grapple, as evidenced by the wounds sustained by both men, and since they were both still alive, I surmised the lion had met her match. I walked up to one of the men, and looked him in the face, admittedly obviously impressed by the courage he demonstrated. He looked at me, and since I don’t speak a word Masai, I spoke the universal language that all men understand…I gave him the “thumbs-up sign." He responded back with a barely perceptible crack of a smile from the corner of his mouth as if to say, “I killed me a lion today.”

I thought of David, who proclaimed to Saul, when told he was unable to face Goliath because of his youth and size, “Your servant has killed both the lion and the bear; this uncircumcised Philistine will be like one of them, because he has defied the armies of the living God." Sometimes God asks us to do things that seem impossible to us, well beyond our own strength and ability, like for David, killing lions, facing Goliaths, or being a King. But these times are divine opportunities to demonstrate courage, which is more a decision of the will than an emotion of the heart, and undergirded by faith that a stronger Power is at work in our lives, accomplishing great things in and through us. Then, when these great things happen, knowing who we truly are in our own strength, all we can say is, “God, you did that…the Glory goes to You.” Were the Masai warriors afraid when they attacked the lion? Perhaps…but fear obviously did not dictate their actions. Necessity did. Sometimes you just “got to do it,” in faith, and trust that God will give what is needed to get the job done. That’s what the heroes of the faith did, normal men and women like you and me, driven often by necessity and a passion for God’s Glory, refusing to bow to fear and cowardice, willing to trust God’s promise to be near. That’s how great things happen.

Deuteronomy 31:6 Be strong and courageous. Do not be afraid or terrified because of them, for the LORD your God goes with you; he will never leave you nor forsake you.”
Posted by The Galat Family Kenya Update at 11:56 AM

I love this story. He did what he had to do. Kill the lion.

It also reminds me of Benaiah. (http://www.esvbible.org/search/2%20Samuel%2023%3A20/) Mark Batterson wrote a great book about it called "Lion in a pit on a snowy day."