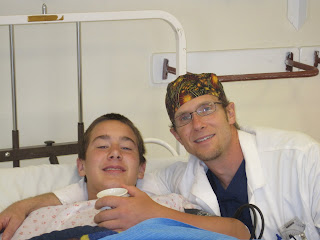 Jeremiah, recovering with cup of chai in hand, after removal of the plates and screws in his knees and ankles. 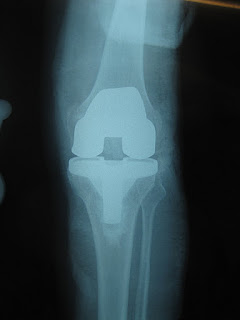 Total knee replacement done with implants sourced from Nairobi. The goal is to help patients with bad arthritis, and use the funds generated by this program to subsidize care for the poor.


People often ask “What is your typical orthopedic surgery work week like at Tenwek.” Following is a sampling of last week’s schedule, highlighting the most interesting case for each day, and the teamwork worldwide required to make modern orthopedic surgery possible at our rural mission hospital:

Monday: Intramedullary nailing (with a long rod) of a midshaft femur fracture with nails remanufactured by a team of students and professors from Cedarville College. Often times, and not surprisingly, nails that are donated to Tenwek are of extreme sizes, more appropriate for NBA players than the average Kenyan. This team took 80+ of these excessively long nails, and first engineered, then re-manufactured them to the most common lengths (38, 40 and 42 cm). Thank you Cedarville team!

Tuesday: (1) Knee arthroscopy (knee “scope”) in a 34 year old Maasi man who works as a chef at one of the premier safari lodges in Kenya (arthroscopy equipment donated by an orthopedic surgeon from the U.S.). (2) Revision SIGN femoral nailing in a 29 year old Muslim man who reminds me daily to get him the English Bible he requested (I promised him he WILL get it tomorrow!). SIGN Fracture Care International is a company which designs, manufactures and distributes orthopedic implants to medically underserved countries around the world.

Wednesday: Three month old distal clavicle fracture in a 47 year old man. Tough case…that’s all I have to say about that.

Thursday: Total knee replacement in an Indian-Kenyan man from Lake Victoria. The goal is to use the funds earned from this burgeoning “adult reconstruction” program (hip and knee replacement) to subsidize the cost of orthopedic trauma implants for the poor. In the next four weeks, we have 6 additional cases scheduled!

Friday: Ankle fusion in a 73 year old man who was initially (mis)treated at one of the largest hospitals in Nairobi where his broken and dislocated ankle was placed in a cast.

Saturday: Plate and screw removal in a burly, 14-year-old young man by the name of Jeremiah Galat. He insisted that the anesthesiologist NOT give him any sedation so that after he was given the spinal, he could slap his own legs without feeling it, and try to make me laugh during surgery.

Sunday: Sabbath day off! Thank you Dr. Moore (4th year orthopedic resident from University of Alabama) and Dr. Bacon (not-so-retired orthopod from the U.S. who is with us for 4 months) for taking call this weekend. The orthopedic service at Tenwek could not survive without a regular influx of visitors who sacrifice vacation and holiday time to serve along-side us.

In all we do at Tenwek, our goal is to bring glory to the One who saved us because of His own mercy! Thanks for all your prayers and support!!

Titus 3:4-6 But when the kindness and love of God our Savior appeared, he saved us, not because of righteous things we had done, but because of his mercy. He saved us through the washing of rebirth and renewal by the Holy Spirit, whom he poured out on us generously through Jesus Christ our Savior.
Posted by The Galat Family Kenya Update at 4:55 AM