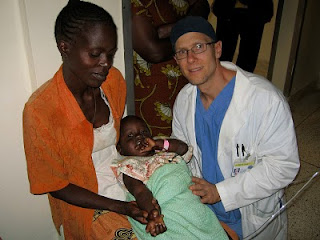 Joshua and mom before surgery, where several people surrounded him with prayer. 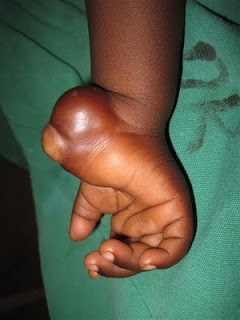 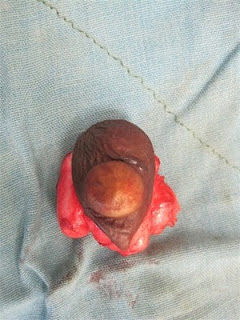 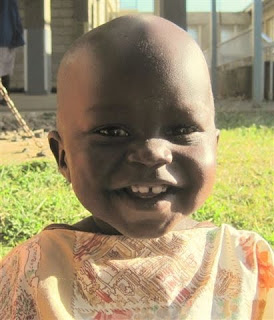 Joshua the day after surgery. All smiles...

Certain patients leave more of an impact on the life of a physician, some because of their unique personalities, and others because of their amazing pathology. When the two combine in the same patient, that impression becomes indelible. Joshua is a sweet, little 18 month old boy, the son of a single and very poor mother from a border town near Tanzania. She noticed a “growth” on his hand, which had consistently grown larger over the past year. Through the friend of a missionary couple here at Tenwek, Joshua was referred for evaluation, and after the funds were scrounged, the journey was made.

The growth on Joshua’s right hand was fairly massive, and about to fungate through the skin on the undersurface of his wrist. While examining him, he managed to smile often, but I could tell the tumor was painful. While my strongest hopes where that this was some more aggressive type of benign tumor, I was also concerned that this could be a rare type of cancer found in children: rhabdomyosarcoma.

During surgery, we used loupe magnifying glasses to make sure no obvious tumor was left behind. Thank the Lord that the tumor did not involve the median nerve, one of the main nerves supplying the hand with vital function and sensation. Tenwek is blessed to have a newly trained Kenyan cytopathologist who received his training at the Mayo Clinic in Rochester (he said he did not know what cold was until he experienced true “cold” during his year in Rochester). Together we looked at a smear of cells from the tumor under the microscope, and found what looked like small “blue cells” mixed with more oddly shaped “spindle cells”…features that are more suggestive of what I feared. Final confirmation will come from the pathologists at Kijabe, a nearby mission hospital.

When viewed from a purely humanistic standpoint, if Joshua’s growth is confirmed to be cancer, the situation appears hopeless with the only option being an amputation of the arm, and with statistical chances of either recurrence or metastasis. However, a missionary colleague reminded me that this isn’t Joshua’s battle to fight, but rather the Lord’s. God is more than able to do a miracle, and we are praying that Joshua receives complete healing. This truth is applicable to our own lives. How often do we feel discouraged, and alone in our weakness, not realizing the truth that God is with us, and waiting with supreme strength to fight our battles? If we would only just submit to the One who knows us, created us, and loves us, I am convinced we would see the miraculous.

2 Chronicles 20:15 This is what the LORD says to you: 'Do not be afraid or discouraged because of this vast army. For the battle is not yours, but God's.

Deut. 31:6 Be strong and courageous. Do not be afraid or terrified because of them, for the LORD your God goes with you; he will never leave you nor forsake you."

Posted by The Galat Family Kenya Update at 7:54 AM

Dan - we have prayed. Have taken the liberty to share link to your blog with our people (rather than retelling the story) and asking those to pray as well.
You are correct, the Battle is the LORD's.
In Christ
Dennis and Cindy McCutcheon

I love to read your blog and check often to see if u post. I will pray for little Joshua. I love the new picture of your family. Someday we will all meet in heaven. :)