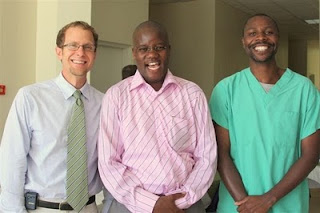 Dan with Mr. Fred Ochieng and Dr. Gerald Angira, both of whom caught a passion for orthopedics while rotating on the service, and will be pursuing further training in orthopedic surgery. 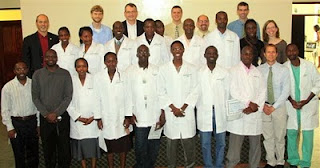 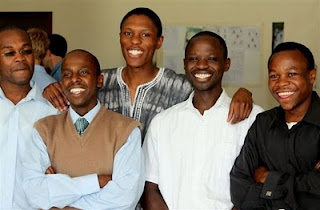 The future of medicine in Kenya, 5 guys very happy to be finished with internship.

Today, we celebrated the graduation of another class of interns, sixteen Kenyan men and women who have been intensively training at Tenwek for the past year. The minor explosion at the lunch catering table, caused by an attempt to add butane fuel directly to an already lit burner used to keep the food warm, resulting in singed arm hair, flaming chapattis on the floor, and a dress that caught on fire, made the event even more memorable. Thankfully no one was seriously hurt, and after this minor disaster was cleaned up, the festivities continued. During the ceremony, each graduating intern received a diploma, a copy of the book “The Purpose Driven Life” and new white lab coat.

Undoubtedly, the most satisfying aspect of the work at Tenwek, and the unifying purpose of all us “western missionaries” who are serving here in rural Africa, is the opportunity to impact the lives of young African physicians. As a consultant in orthopedics, I am privileged to play a role in teaching these physicians who are the brightest and best in Kenya, and of course, to influence them that orthopedic surgery is the ultimate pursuit! And God is doing an incredible work in orthopedic surgery at Tenwek. In addition to Dr. Kiprono, who is currently in his orthopedic residency at Moi University and will be coming on staff at Tenwek as a full-time orthopedic consultant in 2011, two other young men have joined the Tenwek orthopedic bandwagon. Fred Ochieng is a very bright, and godly, young clinical officer, who aced orthopedics during his rotation. He plans to begin an 18 month diploma program in orthopedic surgery, then return to Tenwek to join the team. Additionally, Dr. Gerald Angira, a general surgery resident at Tenwek, rotated with me for 4 months last summer, and recently decided to pursue residency training in orthopedics, also with the plan to return to Tenwek. This greatly excites me to be involved in the “grassroots” development of orthopedic surgeons and clinical officers in a country of 38 million that has, at best, only fifty, less than the city of Rochester, Minnesota!

I have always viewed the work we are doing here as a team effort, all of us joining together in God’s kingdom to accomplish His plans. While I am here on the “front lines,” you could have as much impact in the future of medicine in Kenya, in the training of the next generation of godly physicians. We currently have two major needs, one being the funding for the training of Drs. Kiprono and Angira, and Mr. Fred Ochieng. Unlike in the U.S. where residents get a salary (albeit meager) for their training, residents in Kenya must pay for their own training and living expenses, which costs, on average, $20,000 per year. Thus, most residents have to find “sponsors” before they can even begin, and lack of funds often delays matriculation into programs. By sponsoring one of these fellows, not only would you be helping the future of Kenya, but also Tenwek, as sponsorship also guarantees a commitment to serves at the sponsoring institution upon completion of their training. The second need is for housing of the new interns. As the numbers of interns and trainees increases here at Tenwek, the housing situation tightens. Currently, there are plans for two new intern housing projects, and construction is set to begin on the first shortly. However, the second building is only partly funded, and each missionary consultant has been asked to raise $25,000 towards the completion of this project. If you feel led to join the awesome work that God is doing here at Tenwek in the training of Kenyan health care professionals, let me know and I can provide you with more information! Together we can work to better medical care in this needy area of the world. Thanks for all the encouragement and support you have provided to our family!

Posted by The Galat Family Kenya Update at 12:11 PM

Looking forward to being a part of the team!