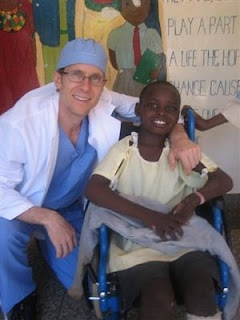 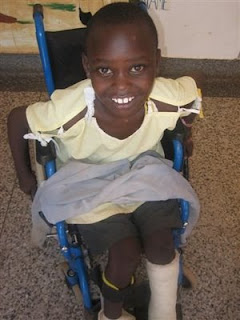 Kipkorir is a young, eight year old boy whose mother recently died from AIDS and whose father is HIV positive. One could consider this enough sorrow in a lifetime for any child, however, the tragedy escalated. Kipkorir was struck by a truck, and dragged underneath on a dirt road for a ¼ mile. Somehow he survived and was rushed to Tenwek for medical care. He had multiple, severe injuries, including a skull fracture which resulted in a brain injury causing weakness on the entire right side of his body, a cervical spine injury causing his neck to be twisted to one side, and multiple abrasions, the worst of which being on his left leg, where the dirt road had completely shaved off the outside three centimeters of his ankle and foot during his horrific ordeal. From a medical standpoint, there was not much we could offer, and he was in severe and constant pain, leaving us with a profound sense of helplessness. We initially considered amputating his badly injured leg, but instead decided to give it time. Without proper imaging, or resources, the neck injury was treated with a Minerva cast. As so often occurs at Tenwek, the only real thing we could offer was prayer.

The daily dressing changes for his leg were excruciatingly painful, and, after a while, the cast which was applied for his neck injury caused a large wound on his chin, and had to be removed. However, beyond our hopes, he miraculously began to improve. After the cast was removed, his neck was no longer turned to one side and his pain was completely gone. His leg wound was eventually covered with a skin graft and he no longer suffered from the daily dressing changes. Then, the weakness of his right side began to resolve and he was able to take some steps. Now today, his wounds are healed, he is able to walk some distance with a walker, and he smiles continually. Whenever he sees me the courtyard of the hospital, he chases me in his wheelchair, laughing with delight. The most moving part of the story was, however, watching Kipkorir’s HIV+ father, himself undoubtedly scarred and saddened by his life’s circumstances, lovingly interacting with his son, offering courage, not once leaving his side.

Many times, events occur that are so far beyond our understanding. We may question God’s activity, or wonder why he allows this type of broad spectrum suffering in a young child such as Kipkorir, and thus we may pass judgment on what ought or ought not to be. But, perhaps, while the reasoning may elude us when viewed via our temporal human understanding, more divine purposes might be at work to change all of us, not just temporarily, but eternally.