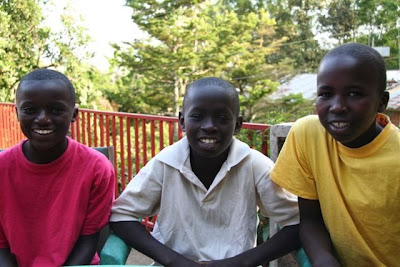 
One of the privileges of being a missionary in Africa is the daily interactions with the Kenyans living around Tenwek. Aside from the daily work in the hospital, there are a myriad of opportunities to be involved in the lives of people, which provides definite mutual blessing. For instance, Heather and I are both involved as “coaches” with Bible Quizzing, a yearly tradition at Tenwek for elementary aged children. Boy and girls who desire to show their biblical and intellectual prowess are divided into teams to study a certain book of the bible (this year the gospel of Luke), and then compete against one another in formal quizzes. Our role as “coaches” is primarily to encourage them in their faith, to mentor them, and be their friend. My team consists of three Kenyans (Edwin, Dennis, and Enoch) and two missionary boys (Andrew and Peter) who strangely named their team “The Kung-Fu Squatting Pandas.” Heather’s team, “The Growing Lilies” (very intimidating) consists of eight sweet, yet highly competitive girls. We compete regularly against one another at every meet, the “Pandas” against the “Lilies,” the boys against the girls, Dan vs. Heather, and the competition is fierce. The Pandas’ secret weapon (Edwin) is a memorizing machine, having memorized word-for-word, 75 verses from Luke.

The privilege of consistently interacting directly with the people you live and work with can be summarized in the phrase “Incarnational Ministry,” a term I first heard from Dr. Paul Hiebert, professor of missions at Trinity, over a decade ago. Literally, incarnational means “in the flesh,” and the concept is that the most effective ministry, the ministry that meets the deepest needs, and has the biggest impact, occurs as we live, in the flesh, long-term, with the people we are called to serve. Incarnational ministry is not exclusive to international mission work. Consider a pastor called to minister to the same congregation year after year, or the teacher called to the same inner-city school, the nurse called to work the same night shift, the business owner called to consistently and faithfully serve others, or the persevering mother inconspicuously raising the next generation of leaders and believers.

Incarnational ministry is not sterile, or remote, but rather gritty, raw, and exposing. When you spend enough time with people, your idiosyncrasies and flaws will eventually become blaringly evident, but paradoxically providing the opportunity to demonstrate our need for forgiveness, and ultimately, a Savior. Our example is the true “Incarnation,” Jesus Christ, “who being in very nature God, did not consider equality with God something to be grasped, but made himself nothing, taking the very nature of a servant, being made in human likeness. And being found in appearance as a man, he humbled himself and became obedient to death-- even death on a cross!” For Heather and I and our family, our calling is to be here at Tenwek, to serve at the hospital, and church, and to minister to the people that God sovereignly brings into our lives.

How about you? What is your Incarnational Ministry? Who have you been called to live among, to serve, and to encourage? Would you ask God “what is your calling for me?” Would you dive off the cliff and say “yes” to God even if your way is uncertain? The only way any of us can, is to truly believe, in our hearts, and by the Spirit’s empowering, that Christ is the greatest treasure that any of us could ever have, and that the life to come is so much greater, and incomparable, to than anything we could ever hope to have here on earth.

Posted by The Galat Family Kenya Update at 11:35 AM