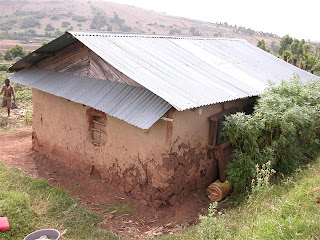 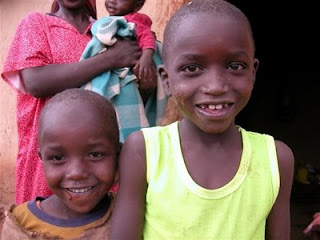 Two of Anna's children, happy to have new visitors.
Couples are often found, temperamentally, to be complete opposites, and Heather and I are no exception. For example, Heather, by nature, is more generous, and I, on the other hand, tend to be more…“cautious” (as I would like to describe myself). This can, on occasion, cause conflict. But, (as many husbands come to realize), I find that God uses my wife as a tempering agent, challenging me to live more faithfully, as illustrated in the following story.

For some reason, Heather seems to always draw, and befriend, the neediest people. Now, Africa has many such people, but one woman Heather met randomly while walking up a path at Tenwek, is extreme. They began to talk, and Heather was drawn to her warm smile. A few days later, “Anna” stopped by our house to give Heather, as a gift, a small bag of dried beans. This gesture moved Heather to find out more about her situation from Hannah, our (superb) Kenyan cook, who also seems to know everything about everybody. Anna is a single, young Kenyan woman, with 6 children (all from different fathers) living together in a single room mud hut with barely enough food to survive. The hut is owned by her uncle, but she owns the small piece of land on which it sits, an African concept that I still have a difficult time understanding (when you buy property here, everything on it is “a la carte” – the structures, the trees, the tea bushes, etc.). Anna had enough to buy the small plot (invaluable for growing food), but not enough to buy the house. Anna’s uncle recently put the hut up for sale to raise funds for his new house. Theoretically, someone else (besides Anna) could buy it, force her out, and live on her property. Otherwise, with no buyer, the uncle planned to demolish the house and sell the parts as scrap, leaving Anna and six children with nowhere to live.

Through more investigating, Heather discovered that the uncle would sell the house to Anna at a “discounted price,” i.e. for the price of the newer sheet metal corrugated roofing he recently installed (the only thing of real value on a house made of wood, mud and metal sheeting). More investigating through Peter (our Kenyan handyman / private investigator), revealed the whole story was legitimate: Anna has the deed to the land, and the local chief confirmed that her uncle offered to sell the house for the proposed cost of the sheet metal roofing. The only missing piece (recommended by our Kenyan friends and Tenwek missionaries) was a personal visit from Heather to assess the situation.

When Heather presented the entire story to me, and proposed that we buy the house for her, my immediate thought was that of skepticism and judgment. “This sounds too good to be true,” I thought, “and besides, she has made some bad choices in life…I can’t be expected to rescue every needy family in Kenya.” I told Heather I would leave it to her judgment, because honestly, I did not want to get involved. And I felt justified in that my work was being done at the hospital.
Heather made plans with Peter to ride bikes to Anna’s for the visit on Thursday afternoon. That morning, during my time in the word, I read a section of scripture from Luke 3. Crowds where coming to John to be baptized, and he was preaching to them a strong message of repentance, calling them a “brood of vipers,” and stating that “every tree that does not produce good fruit will be cut down and thrown into the fire.” “What should we do then?” the crowd asked. John answered, “The man with two tunics should share with him who has none, and the one who has food should do the same.” Hmm…

Directly after I read this, Heather asked if I would be willing to make the trek instead of her, if by some miracle I got off early from work, as the distance was several miles over very bad roads. I thought to myself, “Here we go…I’m getting roped into this!” “Sure,” I said, “I’ll go if I can,” feeling safe as I have never gotten off early from work here. Of course, several cases did not show up for surgery that day, and for the first time since coming to Tenwek, I was done at noon. Hmm…

Of course, Heather was elated when she saw me at lunch, and said, “Great! I found a bike for you to borrow, and Peter is ready to leave anytime.” I reluctantly agreed (wishing that on my first unexpected afternoon off, I could take a nap or partake of some other self-gratifying activity). In retrospect, I know God sovereignly arranged the entire day. Heather could not have made the ride…it was very difficult and tortuous, over hideous roads…my buttocks is still sore. Moreover, I was swarmed by school children (who had never seen a “mzungu”) and who almost knocked me over while riding. To top it off, on our way home, it began to downpour so that, after our journey, we were covered in mud. But what I witnessed both appalled and inspired me. “How could anyone live like this?” I thought…”seven people in one room the size of my living room…Yet they are so happy.” Anna showed me a small tattered plastic bag that contained a bible and scrap paper full of notes and verses she scratched during the weekly bible study she attends at Tenwek. I came away both convicted of my petty premature judgments (based upon my own standards of what ought to be), and convinced of what we needed to do.

Thanks to all of you who have donated into our project account through Samaritan’s Purse. The funds to purchase her home are a direct result of your generosity and we will let Anna know that this gift is on behalf of our partners, her brothers and sisters.

Posted by The Galat Family Kenya Update at 7:16 AM

Dan, I can identify. It's actually a little eerie how similar your story is to one we've been dealing with. 7 kids from different dads, and Joanna definitely has more compassion.

Thanks for the good thoughts.